Why are women being left behind in VET?  – comment by CEO Craig Robertson

Why are women being left behind in VET?  – comment by CEO Craig Robertson

International Women’s Day was established in 1911 in Copenhagen but reflected growing unrest among women across the globe. Some 15,000 women marched through New York City in 1908 demanding shorter hours, better pay and voting rights.

International Women’s Day was also honoured the first time in Austria, Denmark, Germany and Switzerland on 19 March. More than one million women and men attended rallies campaigning for women’s rights to work, vote, be trained, to hold public office and end discrimination.

Justification was reinforced less than a week later on March 25 in the tragic ‘Triangle Fire’ in New York City which took the lives of more than 140 working women, most of them Italian and Jewish immigrants. This disastrous event drew significant attention to working conditions and labour legislation in the United States that became a focus of subsequent International Women’s Day events.

The struggle continues as we have been reminded these past few weeks.

Higher Education is a story of progress, though.

The ABS Social Trends in 1994 reported that in 1992, 55 per cent of undergraduate students were women but the proportion reduced to 42 per cent for higher degrees. “There appear to be two major obstacles to achieving greater equality in the proportions of men and women studying at higher levels, the ABS reported, “the lack of proportional equality at lower levels in non-traditional fields of study for each sex; and the strong vocational nature of many courses traditionally undertaken by women for which a higher degree is not necessarily the most useful career move.”

No doubt the performance has improved. In 2019 females represented 55.6 per cent of enrolments across the profile of higher education.

The real issue is the performance of the VET sector.

The full-time opportunity for females is extraordinarily low.

Whether these rates are by policy design, personal choice or individual circumstance, surely some attention is warranted.

If education and training is one of the avenues for advancement and the tool to break down gender-based bias then surely the VET sector must be seen in the same light. However, where we have VET qualifications that chameleon the labour market there is little hope while the labour market still struggles with pay and status parity.

Remedies are even more urgent given COVID has displaced so many women from work because the roles they fill have been the ones that have been forced to close.

The ABS continued in 1994 that the lower proportions of women studying at post-graduate level have at least two implications for policy makers: the impact on women’s employment opportunities and realisable income levels. How true for VET in 2021.

Take the time though to read about International Women’s Day through our TAFEs.

The federal government has decided to extend the 50 per cent apprentice wage subsidy that saw employers rush to sign up 100,000 new apprentices and trainees in just five months.

The Prime Minister is expected to announce the extension today, removing the 100,000 cap and allowing the program to run until September 30.

The $1.2 billion scheme was announced last October as a way of boosting new enrolments, with an end date of 30 September 2021, or once 100,000 places were filled.

The program provides a subsidy of 50 per cent of wages paid to an apprentice or trainee up to a maximum of $7,000 a quarter. The rapid take-up of the scheme has come as something of a surprise and seen all the available places snapped up in five months.

Importantly, today’s changes mean that not only is the scheme uncapped, but that all those already signed up as well as new enrolments will receive the wage subsidy for a full 12 months, not just until September 30 as originally planned.

Industry and union leaders have tackled some of the critical issues in achieving the revival of a modern Australian manufacturing sector, during an industry roundtable hosted by IBSA Group.

Better resourcing was also needed for TAFEs in order to “recover their capability” to deliver the skills needed in advanced manufacturing.

“The funding here is poor, it’s been eroded over a long period of time and you’ve got to re-invest in the TAFE system to rebuild its capabilities,” Ms Westacott said.

“You need the money and investment in TAFE so it can also keep up with the technology needs of industry. It’s going to need a huge investment,” he said

Dr Ross Lambie said the manufacturing sector would need to be better aligned with the training system, and that more needed to be done to promote careers in manufacturing.

“We’ve got to make manufacturing more appealing as a profession,” he said.

Ms Robertson said there was broad agreement amongst panel members that industry, business and unions were uniquely placed to work together on an ambitious agenda for economic recovery through modern manufacturing.

This was echoed by a call from the ACTU for the sector to work together on skills development in the future.

“We need to record and document our consensus here and say it to Government in one voice,’’ ACTU Assistant Secretary Scott Connolly said.

“The roundtable was the last in a series of seven online-based industry engagement events, hosted by IBSA Group, following the release of the Modern Manufacturing Strategy in last October’s Budget.

It will culminate in a report to the federal government on findings and recommendations to invigorate the skills sector. 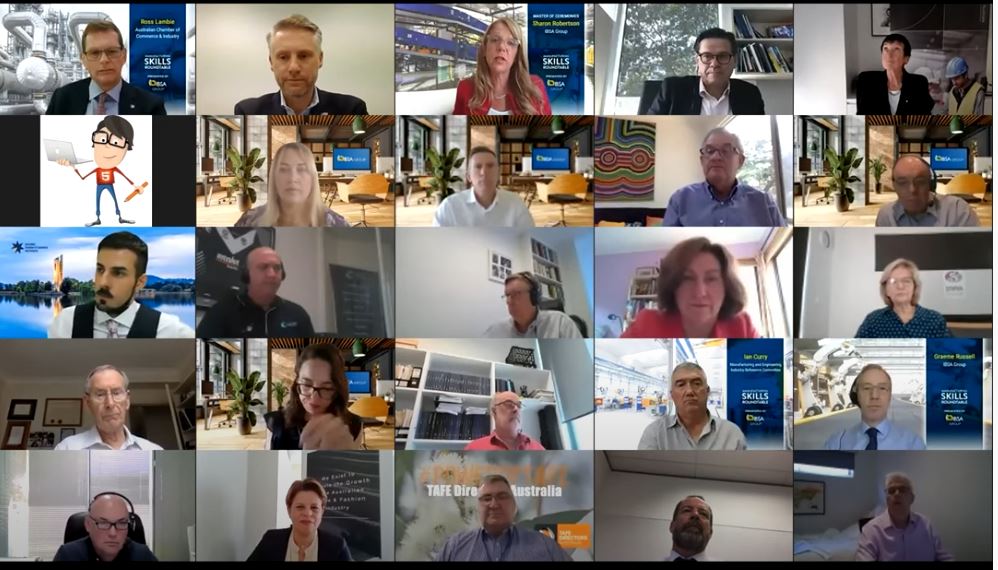 Despite travel limits forced by COVID, on Monday 1 March TAFEs through TDA have commenced support to the Government of Bhutan to enhance TVET delivery and connections with employers.

The project was launched virtually in the presence of H.E. Bryce Hutchesson, Deputy Head of Mission, Australian High Commission in India and Mr Dasho Sonam Wangchuk, Secretary at the Bhutanese Ministry of Labour and Human Resources and key providers and industry representatives in Bhutan.

TAFE Queensland and Melbourne Polytechnic are key delivery partners, along with TDA, on the Australia Bhutan TVET Sector Reform project.

The Australian team will support the Royal Bhutanese Government, VET providers and industry on curriculum development, industry engagement and trainer professional development in the areas of Tourism and Hospitality and Occupational Health and Safety. The project will run until December 2021. 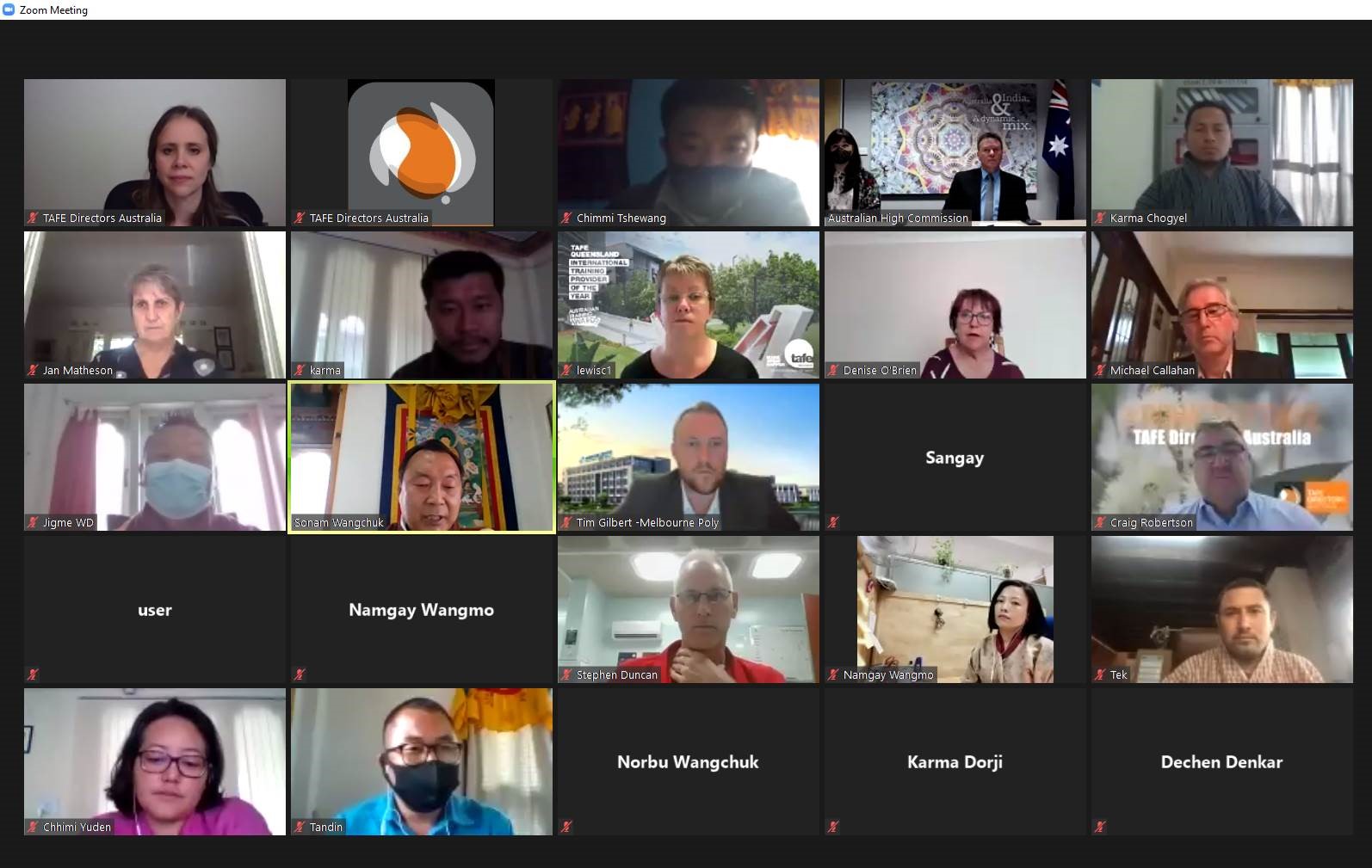 A chance to have a voice on VET reform

There are still a number of avenues to have a say on the federal government’s plans for VET reform through open consultations.

The full range of consultations can be viewed here. Those that have particular relevance to TAFE and other RTOs are listed below.

Supporting VET Workforce Quality Survey: This survey is for anyone who engages with the VET sector, including trainers, assessors and RTO managers, as well as peak bodies and employers. The survey is intended to help identify the strengths of the VET workforce, and areas for improvement and further support. Closes: 9am AEDT Monday 15 March 2021.

RTO Standards Survey: Active users of the Standards for RTOs 2015 such as RTOs, trainers and assessors, and VET experts are encouraged to complete this survey. It seeks feedback on the general effectiveness of the Standards as well as individual clauses and schedules. Closes: 9am AEDT Monday 15 March 2021.

RTO Quality Survey: This survey explores issues relating to the quality of RTOs. RTOs, employers, industry bodies and other VET stakeholders are encouraged to give feedback to help build a better understanding of what high-quality RTO practices look like and how governments can better support RTOS to deliver high-quality training. Closes: 9am AEDT Monday 15 March 2021.

Training Experience Survey: This survey seeks feedback on the experience of those who have undertaken training (or their parents/carers) in the VET system in the last five years. Closes: 9am AEDT Monday 15 March 2021.

Box Hill Institute is seeking an experienced academic or senior teacher with a higher education academic background and experience for the role of Higher Education Quality Business Partner, based at its Elgar Campus in Victoria’s Box Hill.

A teacher asks, 'what's the point of school?'

As some nine million UK students head back to school after months of COVID lockdown, a prominent education advocate and practitioner has raised questions about the value of classroom teaching.

Writing in the Financial Times, Lucy Kellaway says the pandemic which has halted classroom teaching for two extended periods has afforded a break – for teachers, parents and policymakers – to wonder if getting back to normal should really be the goal, or “whether there’s some improved version of normality that we should be aiming for instead.”

Ms Kellaway is an FT contributing editor and co-founder of Now Teach, an organisation that helps experienced professionals retrain as teachers.

She observes that a large number of 16 and 18-year-olds over two successive years have been denied the chance to prove themselves in exams “that their entire education since the age of four has been directed towards.”

“For some, this is a blessing as the grades granted by their teachers may give them the benefit of the doubt and be higher than what they would have got on the day, had they had to slog it out in the merciless silence of the school gym.

“But for these year groups, and for others watching the mass cancellation of exams, it inevitably raises the question: what was all that education actually for?”

She argues that the pressing issue relates to the value of what children learn at school.

“There is not a free second to do anything other than teach the sodding curriculum. And seen from these close quarters, studying the exam does not provide much in the way of education,” Ms Kellaway says.

“The point of education as currently configured is as a signalling device to universities and employers – students with the right exam scores are allowed on to the next phase of life. The children need the qualifications not to understand the world, but to make their way in it.”

“The point of my job is to open doors for students, and exams are those doors”.

Optus Enterprise is hosting a free virtual event along with Cisco and Apple this Thursday, March 11.

In this session, thought leaders at each organisation will share insights and perspectives on how the current climate is driving institutes to reimagine new learning, operating and business models for education and skills training.

A recent study commissioned by Cisco and Optus on the impact of COVID on Tertiary Education has led to the release of The Tipping Point for Digitisation of Education Campuses providing key findings and a set of recommendations that will form the focus of this panel discussion.

TDA encourages prior registration for this free virtual event.

Colleges & Institutes Canada (CICan) is holding its fully virtual 2021 Connection Conference on April 26-28, with some 50 live and recorded sessions and presentations, and more than 100 speakers from Canada and globally.

The theme ‘Changing Narratives’ reflects how the global impact of COVID-19 forced post-secondary institutions to dramatically change the way they operate – both ‘how’ we teach, and ‘what’ we teach.