The Power of Diversity – comment by CEO Craig Robertson

The Power of Diversity – comment by CEO Craig Robertson

For someone who has spent half of his life learning or teaching bible stories the one of the Tower of Babel was particularly curious. From Genesis, it tells of the Babylonians building a tower to the sky to reach for their God and, possibly more pointedly, to demonstrate their closeness to God to ward off enemies.

According to the legend ascribed to this Old Testament story the tower could be built because the citizens had the one language which gave them the power to coordinate. God was displeased that their self-sufficiency was leading to pride. So different languages were imposed on the people. Unable to communicate, building came to a halt and the people dispersed to all ends of the earth.

Scholars interpret the story as the fable which explains the start of different language groups in the ancient world.

Let’s imagine if that one language world were continued. Would our problems be solved? Would there have been no wars? Could differences be worked through? Would we be in a richer, fairer world?

I can’t tell, but it is clear that Australia is far richer, economically and culturally, from its multi-cultural heritage. I would expect a fair portion of the readers of this newsletter can attest to this fact given almost half of the Australian population was born overseas or have parents born overseas. With 7 of the 10 countries of origin of migrants being non-English speaking countries we’ve also benefited from multi-lingual perspectives. At the base interpersonal level the process of bringing different languages and meanings together enriches understanding.

Australia’s heritage is deep in global terms. Genomic research[1] reveals Papuan and Aboriginal ancestors arose from a single movement out of Africa around 72,000 years ago and Aboriginal populations have inhabited the land continuously, including Tasmania, since that time.

This is NAIDOC week under the theme of Heal Country, Heal our Nation. All of Australia benefits immensely if we heed the message from the original inhabitants of this land.

Just this past week someone from Bachelor Institute of Indigenous Tertiary Education in the NT was relaying their success in the program preparing Aboriginal and Torres Strait Islanders for service in armed forces. Of the participants in the program 96 percent completed and of those who chose to enter basic training 85 percent completed. Bachelor was the winner last year of the Industry Partnership award for the 2020 Australian Training Awards as a result. The key ingredient to success was the translation between cultural settings – of the young Indigenous participants and that of the defence.

Maybe, and even bizarrely, an all-knowing God foresaw the danger of one language group and ultimately a mono-cultural society.

There’s a message for VET. The expectation that competency is the only solution, and the only outcome is a job, even if the job is poorly paid and insecure, leaves the VET sector in a poorer place.

The Tower of Babel tells one message of the folly of self-sufficiency and arrogance, but more importantly, NAIDOC tells us here and now of the benefits from working with diversity, not only to heal the nation but in our education and training systems more broadly.

Training providers approved to offer VET Student Loans (VSL) are now able to sign up to a voluntary code that sets out their responsibilities in areas such as recruitment, marketing and student complaints.

The VET Student Loans Code of Practice has been developed by the Commonwealth Ombudsman. The code is voluntary, however the ombudsman will publish a list of providers that sign up to it “as a signal that those providers are committed to good service delivery and take complaints seriously”.

The code emphasises that when marketing VSL courses and recruiting students, providers will “act ethically and be open and honest in their representations”.

Providers should also “ensure students are academically suited for the course they are enrolling in and regularly monitor student progression”.

Providers are urged to ensure complaints and appeals processes are made known to students and are free and easily accessible.

The VSL program commenced in 2017 and replaced the VET FEE-HELP scheme.

Avondale College has been registered as a university, while the National Institute of Dramatic Arts (NIDA), Moore Theological College, and the Australian Film, Television and Radio School (AFTRS) have been registered in the new University College category.

The changes accompany the commencement of the revised Higher Education Standards Framework which incorporates the recommendations of the 2019 review of Provider Category Standards.

“The reforms include the new University College category, which recognises high-quality institutions and provides them with new opportunities to develop course offerings that meet the future needs of students, employers, industry and communities,” he said.

“TEQSA congratulates Avondale for achieving the requirements for registration as an Australian University under the Higher Education Standards Framework.

“TEQSA also congratulates NIDA, AFTRS and Moore Theological College for being the first three providers to be registered in the new University College category.”

Plumbing trades, engineering and constructions trade blocks have all been upgraded, along with a new nursing and allied health facility.

Since 2015, enrolments in trades programs at the campus have more than doubled and these upgraded facilities mean even more apprentices will be able to train at the Alexandra Hills campus, which is great news for the region and will ensure there’s a pipeline of qualified tradies coming into the local industry. 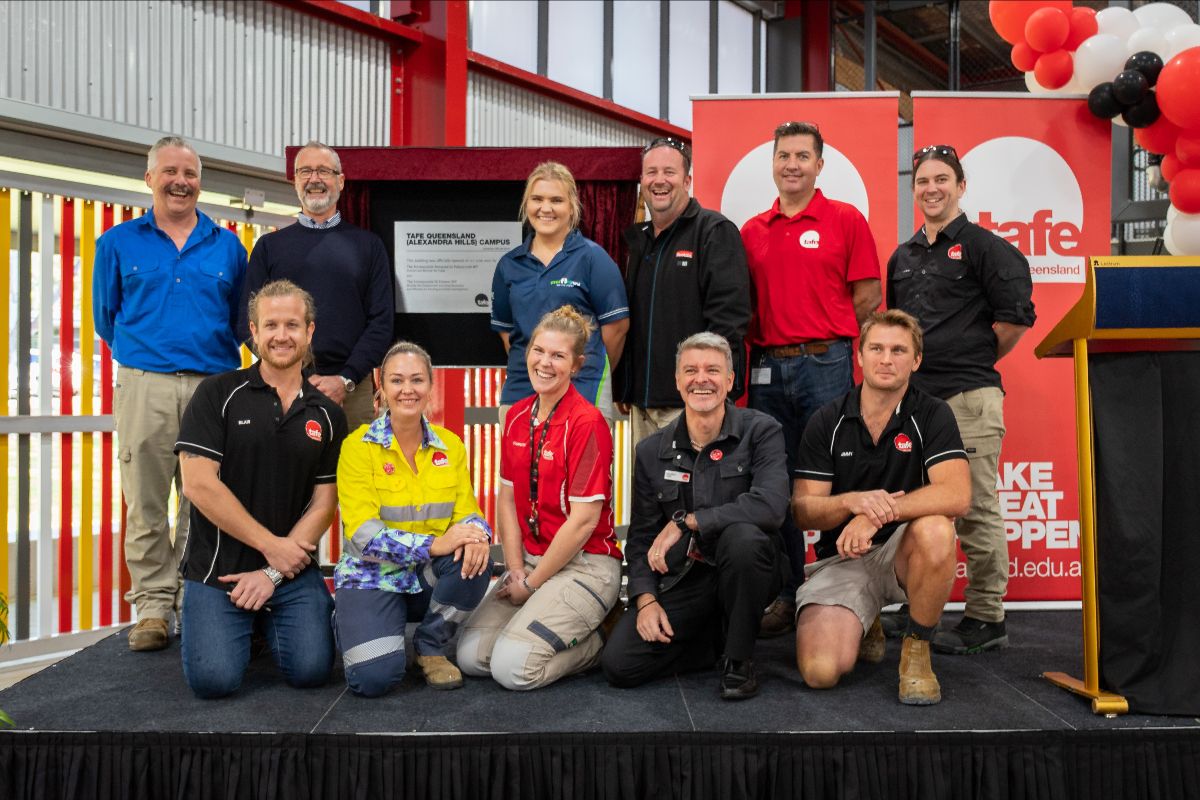 The Queensland government has terminated the contracts of 12 government subsidised training providers and sanctioned another 43 as part of a crackdown on poor quality training.

The Minister for Training and Skills Development Di Farmer said the actions come 12 months after the government introduced tougher quality controls on providers under the Skills Assure Supplier scheme.

“Make no mistake – if you’re an RTO refusing to meet the high standards we expect of our training providers, we will throw the book at you and I make no apologies for that,” Ms Farmer said.

“We work with over 400 RTOs, and the vast majority are excellent,” she said.

“Unfortunately, a tiny minority of RTOs are doing the wrong thing, and they will not have their agreements renewed.”

Some of the agreements were cancelled because of investigations relating to complaints of false and misleading advertising. In one case a provider went from 12% compliance to just 16% compliance over an 11-month period, despite repeated attempts to help them improve, Ms Farmer said.

Ms Farmer foreshadowed tougher oversight of third-party arrangements entered into by RTOs and warned that those breaching rules would be referred to the Australian Skills Quality Authority.

The court found Captain Cook College implemented a system of unconscionable conduct from 7 September 2015, when it removed consumer safeguards from its enrolment and withdrawal processes for online courses under the former VET FEE-HELP (VFH) loan program.

During a period of about three months following these changes, Captain Cook College enrolled over 7,000 consumers in online courses in subjects such as business, project management and human resource management, and claimed over $50 million from the Commonwealth under the VFH program for about 6,000 of those consumers. The college ceased trading in 2016.

“Captain Cook College enrolled vulnerable and disadvantaged consumers in courses they were unlikely to ever complete or receive any vocational benefit from despite incurring a large VET FEE-HELP debt,” ACCC Chair Rod Sims said.

“Over 90 per cent of the affected consumers did not complete any part of their online course, and about 86 per cent of them never even logged into their course.”

It is the ACCC’s fifth action in which the Court has found that a VFH provider engaged in misleading and unconscionable conduct, and follows judgments against Unique International College, Cornerstone Investment Aust Pty Ltd (trading as Empower Institute), Australian Institute of Professional Education and Acquire Learning.

The awards honour and support higher standards in applied education institutions and offer the opportunity to showcase and foster best practices in the sector.

The awards are open to all WFCP members, regardless of type of membership, and their member institutions, and recognise excellence of both individuals and institutions/associations in 12 categories.

Award recipients will be announced at a ceremony, which will take place in Donostia-San Sebastián, the Basque Country (Spain) on the occasion of the 10th Bi-Annual World Congress, from June 13 –17, 2022.

The federal government has opened the latest of its network of Industry Training Hubs – the newest at Gosford on the NSW Central Coast.

The hub is one of 10 being trialled across the country as part of a $50 million plan to help connect year 11 and 12 students with employers in areas of high youth unemployment.

Each training hub is managed by a full-time career facilitator. The NSW Business Chamber has been awarded the contract for the Gosford hub.

The three remaining hubs will operate in Grafton, NSW, Wanneroo, WA and Alice Springs in the Northern Territory.

The Australian Industry and Skills Committee (AISC) has put in place new arrangements to manage changes to training packages in order to meet a deadline for reforms that will give industry greater say in the training system.

At its recent meeting, the AISC decided to adopt a number of measures to ensure that new “cases for change” to training products can be completed by December 2022, when a new industry cluster structure is expected to commence.

To meet the deadline, cases for change will need to be accompanied by a detailed project plan.

In addition, Industry Reference Committees (IRC) and Skills Service Organisations (SSO) will need to demonstrate a capacity to meet the new timeframe.

Critically important projects that cannot be completed by December 2022 will need to be accompanied by a transition plan.

The deadline is the result of the recent federal Budget announcement which provides $149 million over four years to establish up to 15 industry owned Skills Enterprises to deliver improved skills and workforce outcomes through collaboration with industry.

NSW school leavers and others wanting to find the best training course now have an online tool which allows users to compare training providers.

The market comparison tool is designed to help users select a training provider that is approved to deliver courses that are subsidised under the NSW government Smart and Skilled program.

The feature also includes personality and subject quizzes that aim to match a student to possible careers and industries.