The Intergenerational Report is due in July. It was started by Treasurer Peter Costello in response to concern there wouldn’t be enough income generating workers to pay the pensions and health costs of the increasing number of retirees. 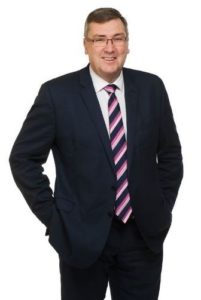 The health insurance industry highlights the risk in sharp relief. Analysts warn that only about three funds are expected to survive over the next two or three years because young people are abandoning cover. The risk pool is shallow – fewer younger healthier people are putting in funds to top up what drains from the reserve to covers the costs of older Australians.

We know something about shallow pools. Ask the townsfolk of Menindee who have seen the fish kill first-hand due to poor water flows, or the towns now trucking water to supplement their dams.

We were reminded this week of the shallow pool of talent we have in Australia. In Parliament last week  Shadow Minister for Education and Training, the Hon Tanya Plibersek MP reminded us of the challenges: “In September last year, the Australian Industry Group found that three-quarters of employers they surveyed could not find the skilled and qualified staff they needed for the vacancies that they had.”

Ged Kearney, Shadow Assistant Minister for Skills, said: “TAFE and vocational education funding and the number of supported students are lower now than they were over a decade ago. This is despite an increased number of jobs requiring vocational skills.”

It’s hard to see that the Morrison Government  is taking the skills issue seriously. The Final Budget Outcome for the 2018-19 Budget released last September shows its funds declined by over 8 per cent, or $148 million in that year alone. It continues the slide, as shown in the graph. 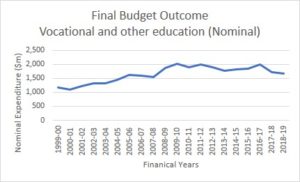 Costello asked us to have a child for the country. That bubble of now 18-year olds will be flowing through for the next decade.

We’ve also relied on migrants to stoke our growth and turn the economy over, aided and abetted by rapacious numbers of international students, and we see how fragile that strategy can be.

The Productivity Commission is in the middle of its review of the funding agreement between the Commonwealth and states and territories. To a certain extent its terms of reference has it looking at the mechanics of the agreement – seeing what can be rescued from the shallow pool, so to speak. A genuine review would look at the broad economic factors at play, including low investment levels and the economic cost of shortages of skilled entrants to the labour market. Even if the Commission doesn’t  have a social mandate, surely economic stability should count in its factoring. The only conclusion must be that substantially more funding is needed to start to fill the skills pool.

By the way, in case you need convincing about our ageing population, over the last 20 years to June 2019:

Time catches up on you in the end. The same is true of the neglect of vocational education and training in Australia. You can only draw from the skills pool for so long before the impact is felt. The problem with shallow pools is, apart from the smell, they eventually dry and never return.

Hopes for an end to China student travel restrictions

The federal government has extended for at least another week, the current travel restrictions preventing some 100,000 students in China from commencing university and VET studies in Australia.

On February 1, the government imposed a two week travel ban on arrivals from mainland China in an effort to halt the spread of the coronavirus (COVID-19).

Last Thursday, the government, acting on medical advice, agreed to extend the travel ban for a further week, but says it will review it again at the end of this week, raising hopes that some easing may be imminent.

A statement by the Australian Health Protection Principal Committee ahead of last week’s decision stated that the situation in mainland China had not improved over the last two weeks and any relaxation of the travel restrictions would present “an unacceptable public health risk at this time”.

The Financial Review reported that the Group of Eight universities have undertaken economic modelling showing the coronavirus travel ban would cost the broader education sector more than $1 billion, and put at risk 7500 jobs, for each 10 per cent decline in Chinese students.

The Australian reported last week that the Department of Home Affairs had decided to process, but not issue, new student visas in China, causing alarm among Chinese students.

However on Friday, Education Minister Dan Tehan said the national ­security committee of cabinet had decided to resume issuing visas in anticipation of the travel ban eventually being lifted.

“This is once again a signal from Australia saying we want to see all those international students from China return once the travel advisory is lifted,” Mr Tehan said.

A dedicated email and hotline international.students@dese.gov.au or 1300 981 621 (8am to 8pm AEDST Monday to Friday) are available to assist international students affected by COVID-19.

The Department of Education, Skills and Employment’s has updated information and fact sheets, specifically for universities and VET students and providers.

The Australian Skills Quality Authority (ASQA) will have a new governance structure that will replace its three commissioners with a single chief executive officer, as well as a new advisory council to help guide ASQA’s strategic direction.

The National Vocational Education and Training Regulator Amendment (Governance and Other Matters) Bill 2020 introduced into parliament last week aims to give the VET regulator greater transparency while enhancing its educative role with the VET sector.

The Bill response to the recommendations of the 2018 Braithwaite Review and the 2019 Joyce Review of VET.

The Assistant Minister for Vocational Education, Training and Apprenticeships, Steve Irons told parliament that the advisory council would be drawn from a diverse pool including experts in regulation, communications and training delivery.

“The advisory council will not be a decision-making body but rather a valuable source of strategic advice, a vehicle for confidential information-sharing and a strong foundation for stakeholder confidence in the regulator,” Mr Irons said.

“This is truly an exciting time for the agency’s continued evolution as we move to expand our educative role, evolve our regulatory model and improve communication and transparency,” Ms Rice said.

The federal opposition said it will be supporting the legislation.

Listen to this episode of the ABC PM program on VET regulation and skills priorities featuring Bruce Mackenzie from the Mackenzie Research Institute, Ged Kearney, Shadow Assistant Minister for Skills, and Claire Field, founder of the National Audit and Registration Agency.

There is just over a week left to submit outstanding TVET projects to be recognised at the WFCP (World Federation of Colleges and Polytechnics) Awards of Excellence.

The 2020 WFCP World Congress will be held in Donostia-San Sebastián, the Basque Country (Spain) from 11-16 October 2020.

It will bring together leaders of associations, colleges and polytechnics to celebrate excellence in professional and technical education and training.

This is an outstanding opportunity for Australia’s TAFEs and dual sector universities to be recognised on a world stage.

Submit the Form by mail or email.

The Australian Skills Quality Authority is releasing a series of videos to help explain some answers to some common regulatory questions.

The first of the videos is on the topic of the audit process and features Nita Schultz from the Victorian TAFE Association, Michelle Simpson from Community Colleges Australia, and Andrew Shea from the Independent Tertiary Education Council Australia.

This will be followed this week by a video on assessment-related questions.

ITECA sets up shop in Canberra

The Hon Steve Irons, Assistant Minister for Vocational Education, Training and Apprenticeships officially opened the office – located near the federal Department of Education, Skills and Employment, officially DESE – and running distance to The Hill! 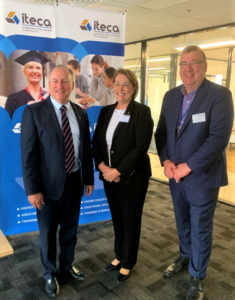