Have you ever measured the progress in your life by tracking your TVs?

My first was a portable that weighed a ton and if you watched more than two metres away the action was like being on the top deck of the MCG. I also remember the day my wife got a call from the bank asking whether she was making a large purchase from David Jones. The truth was I had painted the toy room that the kids no longer used and having had a bad day at work I felt completely justified in man cave terms to buy a flat screen TV. It just squeezed in to the 4WD.

You may be wondering what outlandish point I am leading to. You choose. Is it that:

Let me give you some facts. The Productivity Commission produces each year the Report on Government Services. The most instructive is the funding per hour of training (see second row below) and total hours of training delivered, in the millions (see third row).

You would expect funding per hour to gently increase over the years in line with costs of education. At decade end the rate is lower than in 2008 and it oscillates $4.25, or 23 per cent over the period!

Look at the hours of training against the $ per hour. For the years of high total hours the $ per hour drops, and reverses when the total is low. We simply adjust delivery to suit the dollars on offer.

Do trainer wages give? I wouldn’t think so. Expectation of vocational education hasn’t varied and the Wage Cost Index shows salaries going up close to 30 per cent in the period[1]. Does delivery give? It couldn’t be anything else. Clearly at the height of the ‘entitlement bubble’ between 2012 to 2014 unscrupulous providers were claiming the funds but cutting delivery corners. If ASQA is now discovering providers cutting corners how bad would they have been then?

An alternative is to blame low levels of government subsidy – after all, every business delivers to the dollars. There’s a dilemma though. The more money that’s paid, the higher the risk some providers will seek to profit. The Commonwealth had its own go at increased funding (uncapped even) through VET FEE-HELP and funds per course they allowed went through the roof. Notice the bind. Governments are reluctant to pay more because of the risk of good money after bad.

Governments need to go back to basics. Start with the real costs of quality delivery, pay for it and, by all means, account for it. The only option is to start with government owned entities and those providers states and territories can trust, not with those intent on boosting their bottom line.

The situation is getting worse. During the week, a respected commentator made note of variances of requirements across VET qualifications at the same level:

At the same time funding is failing to meet the basic costs of delivery, the expectations in training packages by industry is higher. There are too many examples of silly requirements in training packages. There is no guaranteed flow through in funding, no feedback to Industry to moderate their expectations and certainly no control from the national committee which endorses them for ministers. Joyce has recommended that the proposed Skills Organisations have industry paying for the training it specifies. If industry needs to pay I’m sure there’d be some sense.

You can accuse me of jiggery-pokery but this data is curated by the Productivity Commission, no less.

Government dismay at just 59 apprenticeships in the defence industry

The federal government has urged the defence industry to get more involved in the VET sector after it was revealed that the sector took on less than 60 apprentices last year.

The Assistant Minister for Vocational Education, Training and Apprenticeships Steve Irons told a defence industry skills summit in Perth last week “…I was “surprised when my department told me that across all the firms involved in the summit, there were only 59 apprenticeship commencements last year.”

“I also learned that this number has been higher in the past,” he said.

“So, what the government needs to know is how we can create the right environment to encourage you all to increase your uptake of apprentices.”

The Minister for Employment, Skills, Small and Family Business, Senator Michaelia Cash told the conference that the naval shipbuilding workforce alone was expected to grow to around 5,200 workers by the mid to late 2020s.

“These are fantastic opportunities for Australians and we need to deliver them,” she said.

The number of skill sets in training packages has exploded from just 20 in 2008 to 1500 this year, according to the National Centre for Vocational Education Research (NCVER).

Reported enrolments in training package skill sets have almost doubled from about 58,000 in 2015 to more than 96,000 last year.

Skill set enrolments were concentrated in just two states – NSW and Queensland – which between them accounted for over three-quarters of enrolments. 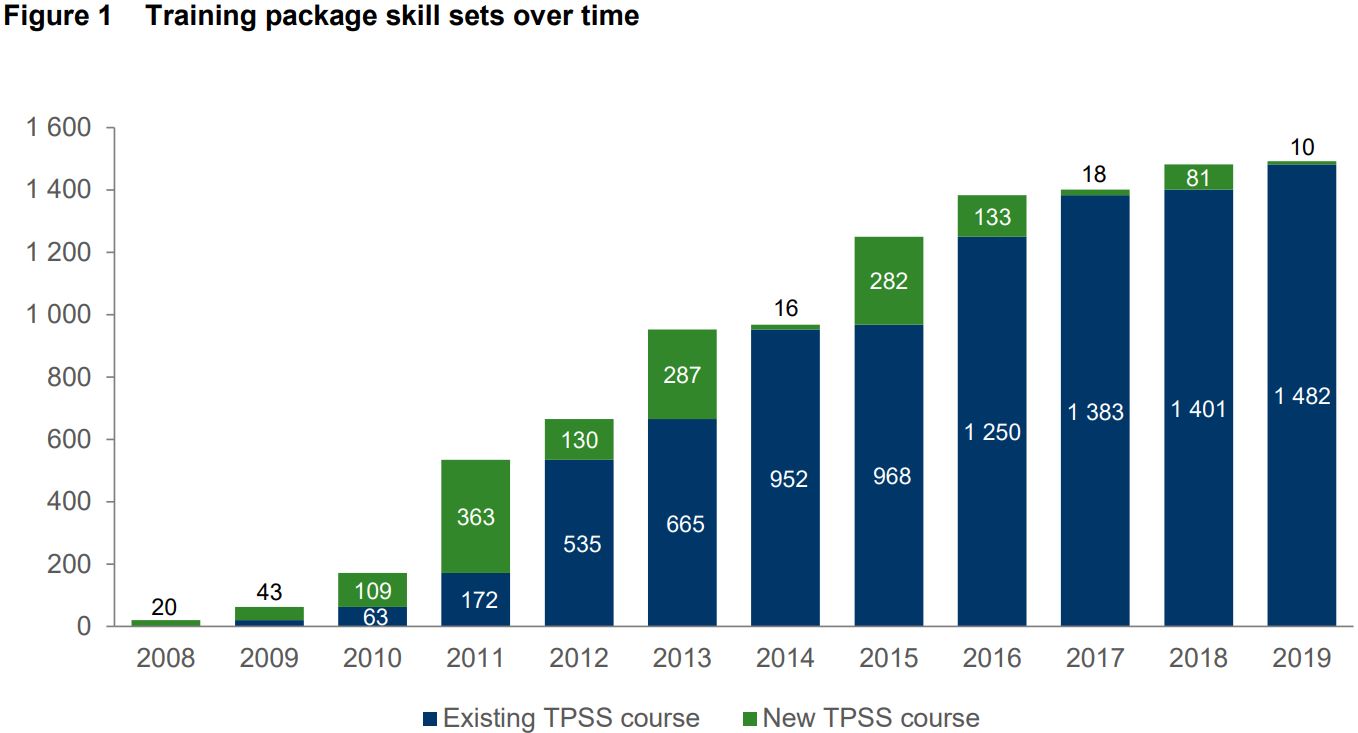 The Australian Skills Quality Authority (ASQA) has refuted suggestions it is either complacent or heavy handed in dealing with training providers, in the wake of an ABC 7.30 report on a joint operation with the AFP to close a private training college.

The program revealed the operation to expose St Stephens Institute of Technology in Melbourne, which claimed to have more than 270 international students and 340 domestic students, earning $2 million in government subsidies.

“There was no teaching and there was certainly no students that were involved in any sort of actual education,” Detective Superintendent Danielle Woodward from the AFP told 7.30.

A former ASQA investigator and auditor, Larissa Kerneborne questioned how some unscrupulous colleges were allowed to remain open, and why ASQA was “losing cases” where it was attempting to cancel other registrations.

In a statement to 7.30, ASQA rejected any suggestion it “turned a blind eye” to poor behaviour by providers.

“The risk based approach to regulation employed by ASQA considers the risk posed by a provider based on a range of data and intelligence, which informs selection for compliance activities,” it said.

ASQA also said that under the risk based approach which focuses on providers considered more likely to be non-compliant, it follows that the proportion of adverse decisions will increase.

Parents are considered the most influential figures in school student’s decisions about a vocational career, according to a new study.

Students also rated the influence of careers advisers and fellow students quite low.

“For school students, parents are key partners in decision-making, therefore their engagement in enhancing the status of VET is vital, along with teachers,” the study says. 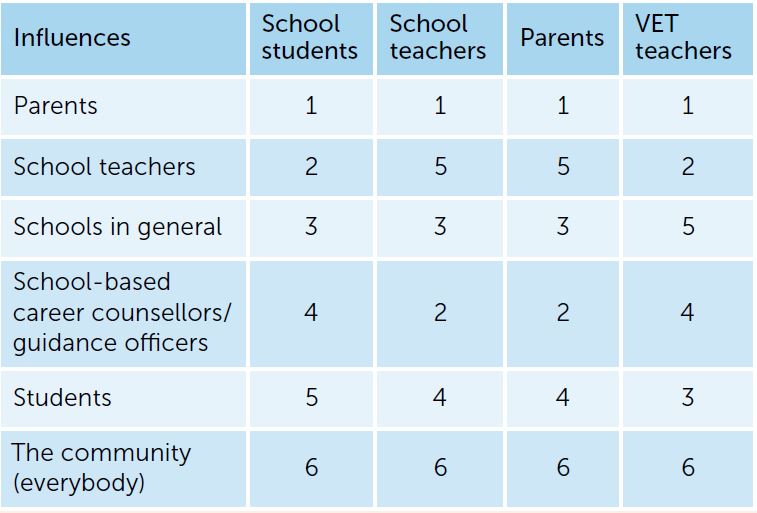 Perth will host the WorldSkills Australia National Championships in 2020.

More than 500 competitors and 20,000 local, national and international visitors are expected to attend the event.

It will bring together the best apprentices, trainees, educators, employers and industry professionals to compete for the title of national champion in 60 skill categories.

It will run from August 13–15 at the Perth Convention and Exhibition Centre. The last national competition to be held in Western Australia was in 2014.

The event is a pathway for medallists to become members of the Australian squad to compete at the next WorldSkills International Competition in Shanghai in September 2021.

The NSW government has released a test version of a new careers website, Lifelauncher, which provides a simple way for students to explore career choices.

It provides a straightforward way to navigate through possible industries, careers and courses, and includes useful information about the outlook for various careers as well as salary information.

For students who are uncertain about what to do after leaving school, there are personality and subject quizzes to help identify areas of interest.

AVETRA (the Australasian Vocational Education and Training Research Association) has issued a call for papers for its annual conference in Melbourne, 23 – 24 April next year.

Abstracts should relate to one or more of the conference streams: VET policy perspectives; VET practice perspectives; Careers and transitions; Contexts for VET; Voices of stakeholders; Big data stories; Open theme (papers that sits outside the above themes, but are still aligned with the conference theme).

Anyone wanting to present a paper on their recent research should submit a 250-300 word abstract by December 5 to AVETRA2020@federation.edu.au

See more about the call for papers.

Speakers at the conference include: