Reforms to industry engagement are reaching their crescendo. Those who are aiming to establish one of the nine (or possibly a few more) Industry Clusters are now well underway with their consultations and submissions. TAFEs are actively participating with a number of these organisations in contributing to their planning for skills and workforce development of their industries.

The Department of Education Skills and Employment (DESE) has stated Industry Clusters are being formed to remove the bureaucracy and elongated processes of the current system. The DESE briefing documents identify these new industry clusters will have several differences to the existing industry engagement arrangements. One is the Industry Clusters must collaborate with each other.

From a TAFE perspective we applaud if that collaboration occurs and truly delivers good and agile solutions for both students and industry. This is a much-needed improvement.

At the end of last year members of TAFEs who are part of TDA’s Quality Network spent considerable time with Government departments exploring how to solve the problem with the updates to First Aid. In simple terms, the Industry Reference Committee (IRC) approved changes to First Aid. However, unless the training package owners of other qualifications where First Aid appeared (and there are loads of these) updated immediately, students in those qualifications had to continue to study the first aid units in that training package. That makes no sense – if the IRC, the experts in this area, deemed first aid should change then it should have been possible for all students to immediately exit with the latest units.

During our discussions with ASQA, TAFEs suggested a practical solution that allowed for all students to study the most recent units and to make it equivalent to whatever was in the training package. Alas, ASQA told us that could not happen. It was the training package owners who had to make the changes.

How was this good for students or indeed the industries that employ them?

In the current architecture, it is not clear how a situation like this will be able to be avoided. ASQA, although sympathetic to the problem, was clear it didn’t have the power to override the training package owners – so who will in this new architecture?

In these new reforms, the system is supposed to be less complex. Who will make the practical decisions that are good for students? In the case of first aid there was an easy solution. The new structure asks Industry Clusters to collaborate, but will that be enough to solve these types of problems?

Last week in this newsletter we highlighted the impact of COVID. TDA calls on those who have the power to reduce red tape to exercise wise and forward-looking decisions that will find practical solutions. Those who manage the system need to ask themselves ‘how can we support the students in our RTOs with good solutions that will also reduce administrative burden?’.

On a separate note, I am pleased to advise that at the end of last year the TDA Board confirmed my position of CEO of TDA.

After commencing as interim CEO last September, I have been buoyed by the support of the Board, colleagues and the members of this great TAFE network.

I look forward to continuing to serve throughout 2022 and beyond, in what will be a most important year for skills, training and the role of TAFE.

Ms Nash will oversee implementation of recommendations from the Napthine Review of Regional, Rural and Remote Tertiary Education.

The appointment was announced by the Minister for Regionalisation, Regional Communications and Regional Education Senator Bridget McKenzie.

“The role of the Commissioner will bring a national focus and direction for regional and remote education and champion the educational needs of students in regional communities,” Senator McKenzie said.

“This will include advocating for the improvement of education policies spanning early childhood education and care, schools, and tertiary education to better support regional, rural and remote students.”

Ms Nash has been appointed initially for a three year term and will report annually on the progress of implementing the recommendations of the Napthine Review.

TDA congratulates Ms Nash on her appointment and looks forward to working with her on the important work of improving outcomes for regional and remote students and employers.

Australia saw a big increase in the number of new apprentices and trainees in the latest figures for the June quarter 2021, as sign-ups surged under the federal government’s employer wage subsidy.

The federal government’s Boosting Apprenticeship Commencements (BAC) program, which started in October 2020, provides a 50% wage subsidy for employers who take on new apprentices up to a maximum of $7000 a quarter. The BAC program runs until the end of March.

The largest increases in commencements were in construction, administrative and support services, and accommodation.

However, the Minister for Employment, Workforce, Skills, Small and Family Business, Stuart Robert, said in a media statement that more contemporary Departmental data showed that in-training trade apprentices has hit around 220,000, the highest on record. 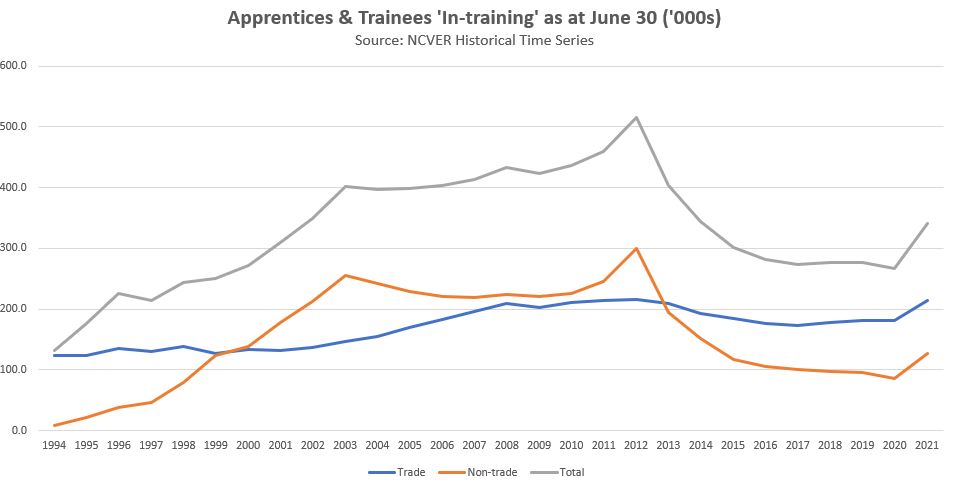 TAFEs continue to have the vast bulk of apprentices in the skilled trades – plumbing, electrotechnology, engineering and related technologies.

Almost 140,000 trade apprentices are ‘in training’ with TAFE, nearly double the number at private colleges.

“Our policies and record funding, $7.1 billion in 2021 alone, put Australians at the front of the queue – whether that is starting an apprenticeship, mastering an in-demand skill or getting into a job.” 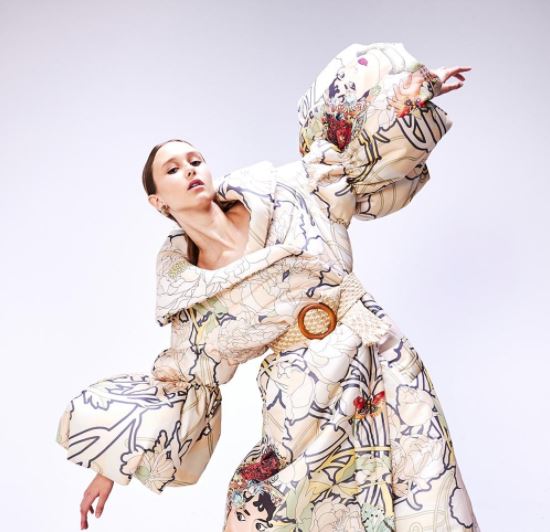 TAFE NSW Fashion Design Studio (FDS) has seen some of its best talent showcased in the latest Vogue Australian edition.

The FDS class of 2021 saw their program paused in July last year, but despite the loss of face-to-face teaching, students substituted their end-of-year graduate showcase with a graduate ‘lookbook’, published in December.

“The mentoring of Laura Washington, head of school, and Alexander Zehntner, senior design lecturer, made it possible for the students to develop and continue working on their graduate collections throughout lockdown,” the Vogue article said.

“Not ones to shy away from colour, the palette of the lookbook is saturated with crimsons and oranges. Where designs lean into more subdued shades, silhouettes – wasp-waisted princess skirts, fringed minis and balloon sleeves amongst them – remain striking and maximal.” 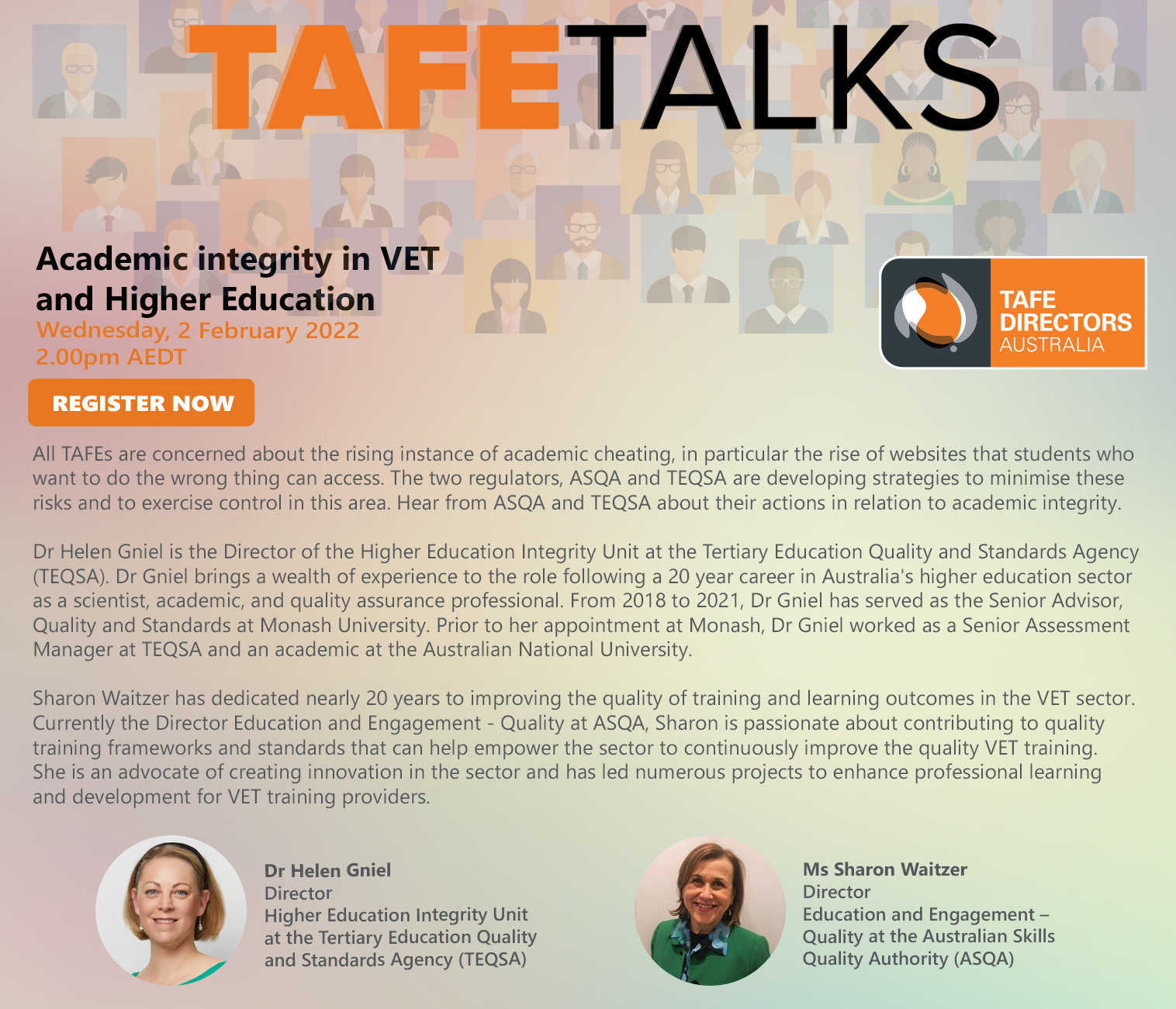 Registration for these events is free! If you cannot attend the event live, please register and we will send you the link to the recording.

Description:
All TAFEs are concerned about the rising instance of academic cheating, in particular the rise of websites that students who want to do the wrong thing can access. The two regulators, ASQA and TEQSA are developing strategies to minimise these risks and to exercise control in this area. Hear from ASQA and TEQSA about their actions in relation to academic integrity.

Dr Helen Gniel is the Director of the Higher Education Integrity Unit at the Tertiary Education Quality and Standards Agency (TEQSA). Dr Gniel brings a wealth of experience to the role following a 20 year career in Australia’s higher education sector as a scientist, academic, and quality assurance professional. From 2018 to 2021, Dr Gniel has served as the Senior Advisor, Quality and Standards at Monash University. Prior to her appointment at Monash, Dr Gniel worked as a Senior Assessment Manager at TEQSA and an academic at the Australian National University.

Sharon Waitzer has dedicated nearly 20 years to improving the quality of training and learning outcomes in the VET sector. Currently the Director Education and Engagement – Quality at ASQA, Sharon is passionate about contributing to quality training frameworks and standards that can help empower the sector to continuously improve the quality VET training.
She is an advocate of creating innovation in the sector and has led numerous projects to enhance professional learning and development for VET training providers. Sharon is experienced in establishing and maintaining collaborative networks with industry, government, peak bodies, education, and research communities throughout Australia to improve the quality of VET delivery to students.

AND for your diary…TAFETalks: Micro-credentials: developing with and for industry

Date: Wednesday 16 February at 2.00pm AEDT (Canberra/Melbourne/Sydney time)
Description: Micro-credentials are on everyone’s lips. Join renowned expert Beverley Oliver and representatives from TAFE Queensland and TAFE NSW to further your understanding of micro-credentials and how two leading TAFEs are working with industry to develop micro-credentials for their needs.

The federal government has released Australia’s first data strategy and accompanying action plan, setting out a long-term vision to create a national ecosystem of data that is accessible and reliable.

The strategy was released by the Minister for Employment, Workforce, Skills, Small and Family Business, Stuart Robert and the  Minister for Superannuation, Financial Services and Digital Economy, Jane Hume.

The strategy is part of a commitment to deliver better services and to support Australia becoming a “modern, data-driven society by 2030.”

The Department of Education, Skills and Employment has been closely involved in the development of the strategy in a process run by the Department of Prime Minister and Cabinet with consultation from across private, research and not for profit sectors.

Young Australians from ten regional areas can apply for scholarships of up to $13,000 to cover the costs of an eligible VET qualification and internship.

Round Four of the Commonwealth Scholarships Program for Young Australians is open for those living in the selected regions, with up to $5,000 on offer per year for two years, along with an additional $3,000 if they also complete a 20-day paid internship.

The program will also provide more training opportunities for those who have transitioned from the Australian Defence Force in the past two years.

Young people aged 15-24 are eligible for the scholarship, but must not be in full-time work or study at the time of applying, and intend on taking an eligible VET qualification from Certificate III through to an Advanced Diploma.

Employers can receive $1,500 per intern hosted.

To be eligible, applicants must live in the following regions:

The World Federation of Colleges and Polytechnics (WFCP) has announced details of its 2022 World Congress which will be held in Donostia-San Sebastian (Spain), June 15-17. 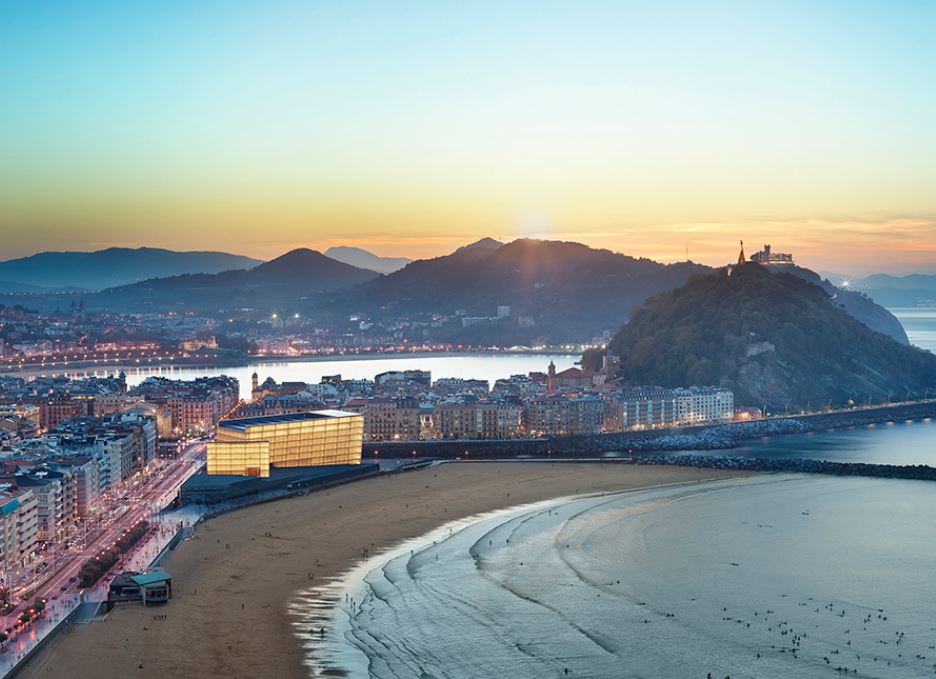 The World Congress is a collaboration between WFCP and TKNIKA (the Basque VET Applied Research Centre) and will have the theme, “TVET Excellence for ALL”.

The event will feature a Youth Camp, Leadership Summit, breakout sessions, and will also see the drafting of the Donostia-San Sebastian Declaration which will give voice to the professional and technical education sector.

The Australian Skills Quality Authority (ASQA) has extended the transition periods for a number of training packages in the areas of civil construction, rail infrastructure and personal injury management.

The transition period for RII30919 – Certificate III in Civil Construction has been extended until 24 July 2022.

The transition period for TLI32515 – Certificate III in Rail Infrastructure has been extended until 30 June 2022.

The transition period for FNS42115 Certificate IV in Personal Injury Management has been extended until 1 August 2022.