Who is best to determine value? – comment by CEO Craig Robertson

Who is best to determine value? – comment by CEO Craig Robertson

The most apocryphal story of King Solomon comes from two women claiming motherhood of a boy child. Coming to the wise king for a judgement to overcome the stalemate Solomon commanded soldiers to cut the boy in half – one half for each. One consented but the other offered the child to the other to save his life. It was the latter to whom Solomon gave the child – the love for (her) child outweighed the property motive of the other (one can only assume the dispute was over earning capacity the boy would bring to the household at some point).

The wisdom of Solomon may be needed to divine the funding models the Morrison government is wanting to operate across Australia’s tertiary sector. And a lot of it comes to the question of value.

Much has been written this past week about the changes in higher education funding announced by Minister Tehan Friday week ago. In the fee‑capped domestic bachelor monopsony market the Government has decided to reduce its subsidy to the humanities and upped the private contribution from students choosing this field. The savings in subsidy outlays has been directed to other courses the government deems are demanded in the economy and pays for more places over time.

As the purchaser of these places, the Government is expressing the value it places on the humanities. The subsidy represents about 10 per cent of the cost of delivery. That’s right, it sees little public benefit that warrants government expenditure.

VET faces the same questions about value. The Productivity Commission in its far-reaching report contended that the wage returns from training represents enough value to students that they ought to pay for the training. To be fair to the PC though it does raise the prospect that there is some public good from VET but queries the evidence.

The PC laments that the VET sector is not customer centric to the extent of disability care and Indigenous services. VET services should be centred on ‘customers’ (students and employers in the case of VET) it says. TAFEs couldn’t agree more. It is students who enrol and employers who give graduates jobs.

The PC seems to ignore an important piece of the value puzzle – the product.  It is the value of the VET qualification upon which a student can stake their future at the hands of the employer.

Who sets the product? Industry does. Industry sets the scope and content of qualifications which is dutifully enforced by the regulator. Students easily assess the value proposition before them, especially in terms of wage and job security. Declines in participation would suggest that neither the product, nor the outcome it leads to, is cutting it.

Employers seem to be saying much the same. The Australian Industry Skills Committee, the ultimate industry authority in the VET sector, on its website[1] puts adaptability, collaboration, analytical and digital skills as the highest order priorities before it comes to occupational skills. Yet Training Packages in the hands of industry stubbornly reflect industry specification of micro-level occupational tasks.

In the PC view of things, it would seem industry needs to pay if that’s their expressed demand.

Too much, too far, Craig, I hear you say. The problem is that VET the sector is full of value propositions with as many different perspectives on the level of that value as there are stakeholders, clients and customers.

Ultimately, the Productivity Commission places faith in students making the best choice to suit their circumstances and aspirations. It is difficult to disagree. Prospective students are no fools.

Despite the Government’s value on humanities, there are numerous reports from prospective university students that they will follow their aspiration and aptitude rather than be swayed by an economic transaction. In the end someone who likes making things lands somewhere in that endeavour, others who like care end up somewhere in that field and those who love cerebral pursuits often end up there, not that any of the others do not entail cerebral effort.

Society is better off with general and transferable knowledge in ways that is difficult to predict from the centre. The value to society from all tertiary study should be indisputable, especially in these troubling times. As Nicholas Whitlam wrote in The Australian during the week:
There is a profound case for pursuing knowledge for its own sake. The humanities are at the heart of all learning: language, literature, philosophy, religion, art, music, ­psychology. These are the things that distinguish us from beasts.

The same proposition should apply to VET students – qualifications and support from Government that generate a return that is more than just value to industry.

Think about this over your morning tea. Firstly, do the competing women reveal the clash between capital and labour – the market over the heart? Secondly, Solomon had no superior knowledge to discern who was the mother but he had the wisdom to create the environment where they revealed that themselves.

Apologies for the obtuse – I took an esoteric pill and it worked a treat!

Micro credentials get their own 'marketplace'

The federal government has given a further boost to the development of micro credentials, with the creation of a “marketplace” where it will be possible to compare the growing range of courses.

The government will provide $4.3 million to build and run a one-stop-shop for micro credentials.

The Minister for Employment, Skills, Small and Family Business Senator Michaelia Cash said Commonwealth, state and territory skills ministers have committed to fast-tracking consideration of micro credentials in the VET system during 2020.

“The marketplace will provide consistency that gives students and businesses the assurance they need to invest in this new mode of education,” Senator Cash said.

“Microcredentials can work as stand-alone qualifications or complement study being undertaken at the VET or higher education level.”

The government’s higher education assistance package in April kicked off the wave of microcredentials and has seen 54 providers delivering 344 short online courses in areas of skills shortage.

With both university and VET funding increasingly linked to future workforce needs, one academic has warned government of the perils of trying to predict the jobs of the future.

David Peetz, Professor of Employment Relations at the Centre for Work, Organisation and Wellbeing at Griffith University says his research on the future of work shows how hard it is to get the forecasting right.

“This is especially the case in employment because, in a quickly changing world, technology is hard to predict and changing consumption patterns even harder,” he says.

Writing in The Conversation he says the type of skills that will likely be in demand appear to be those relating to creativity, problem-solving, collaboration, cooperation, resilience, communication, complex reasoning, social interaction and emotional intelligence.

“Some of these are what universities preferred to call “critical thinking” skills – the sorts developed by generalist degrees like arts and commerce.”

He said that choosing exactly the right field for a degree is less important, in terms of getting a job, than simply doing one.

“Reflecting the constant pressure of credentialism, employers will demand a more educated workforce (and continue to complain it is not “work ready”), regardless of universities’ or governments’ ability to anticipate the skill needs of the future,” he said.

Vocational pathways will have a bigger focus in a revamped NSW school curriculum, described as the biggest overhaul in 30 years.

“Unnecessary content will be cut, there will be a greater focus on literacy and numeracy, and TAFE and vocational training pathways will be modernised,” Premier Gladys Berejiklian said.

It follows a review by Australian Council for Educational Research Chief Executive Professor Geoff Masters. It will see a “decluttering” of the curriculum by reducing unnecessary subjects, a “back to basics” approach through a renewed focus on English, Maths and Science, and Year 11 and Year 12 prequalification for university and TAFE courses.

Further, the NSW government has announced that state-of-the art online VET will be available at every government high school by 2022.

TAFE NSW will develop at least 20 courses for Year 11 and 12 students into online courses to provide equal study options for senior secondary students.

“From 2022, students will be combining vocational skills with academic knowledge,” the Minister for Skills and Tertiary Education Geoff Lee said.

“Their mathematics will be paired with advanced manufacturing, their biology with healthcare or their economics with accounting.”

Apprentice satisfaction on the rise

The proportion of trade apprentices and trainees satisfied with their training has increased since 2008, up 6.4 percentage points in 2019 for those who completed training, according to a new report released today by the National Centre for Vocational Education Research (NCVER).

Apprentice and trainee experience and destinations 2008, 2010 and 2019 also shows that trade non-completers are more satisfied with their training since 2008, up 6.9 percentage points in 2019.

Simon Walker, Managing Director, NCVER, said the new report compares satisfaction and training outcomes for apprentices and trainees who completed, cancelled or withdrew from an apprenticeship or traineeship in 2008, 2010, 2019.

“It’s interesting to see that while employment outcomes for trade workers have remained steady since 2008, regardless of if they completed their training, the proportion of those satisfied with training has noticeably increased,” Mr Walker said.

TAFE's COVID experience to be shared with Indonesia

TDA, in partnership with the ILO and the Australian Embassy in Jakarta, has developed a series of webinars on the Design and Delivery of Online TVET.

It is intended to provide information that will help the Indonesian TVET sector successfully meet the challenges posed by the COVID-19 outbreak and contribute to economic recovery.

The webinar series will cover a wide range of topics, from the design of online TVET programs, utilising new technologies for TVET course delivery, pedagogical and soft skills for online teaching to assessment and certification.

The series will take place on a weekly basis up to August 19. For more information, visit the ILO webpage here.

TAFE Queensland presented a session entitled “Introduction to online TVET” last week. It can be viewed on the ILO Jakarta YouTube channel. 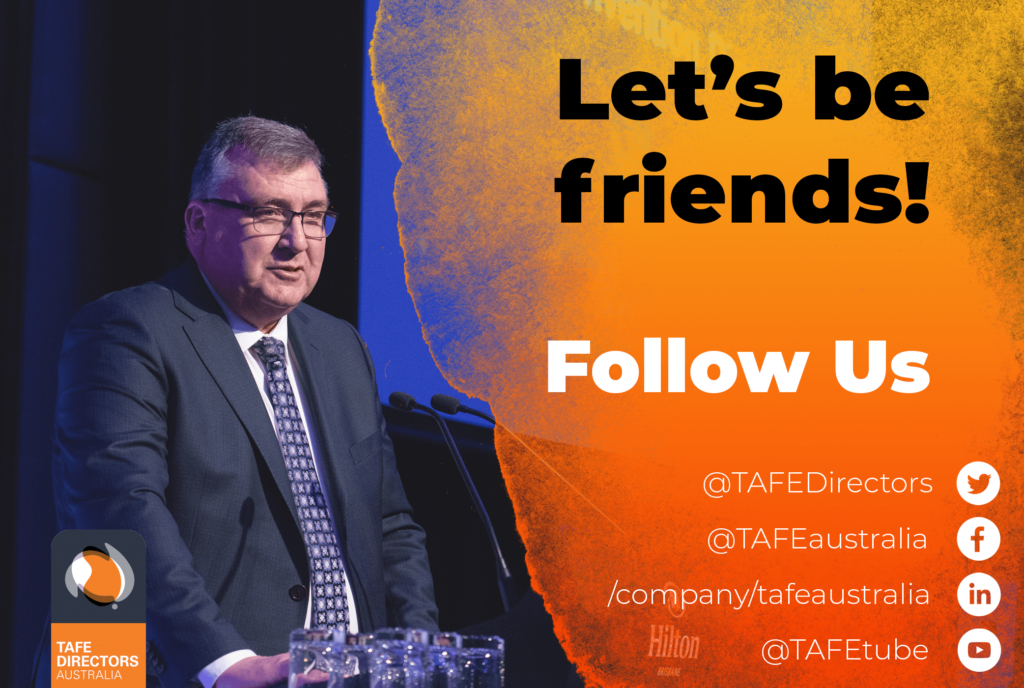 We have recently joined Facebook to widen our audience and reach and inspire more VET teachers, staff members, students and other VET stakeholders with the amazing stories of the #POWEROFTAFE.

TDA as the TAFE peak body brings together a national picture of the TAFE and VET world.

Help us to increase our following by liking our page here: https://www.facebook.com/TAFEaustralia and tag @TAFEaustralia in any posts that you would like us to promote about the work of your organisation, upcoming events, general news, VET policy, and anything VET-related.

To help understand the amendments, the Australian Skills Quality Authority (ASQA) has created a legislative changes webpage, divided into three sections that explain the changes.