Australians have been transfixed with the courage and fortitude of the returned service women and men participating in the Invictus Games in Sydney this past week.

Rebuilding ability that had been taken by a weapon of war and overcoming the mental demons that haunt the annuls of the mind were the heart of competition. Small steps of improvement were celebrated as much as the medals.

I was fortunate to be invited to an Invictus Games function at the Royal Flying Yacht Squadron hosted by the Australian Defence Force Academy of the University of NSW, titled The Power of Education.

Speakers told of education as the pathway of recovery for many injured service personnel, and – for the close to 5,500 members discharging from the Australian Defence Force each year – the source of confidence to compete for civilian jobs. Yet, they face prejudice and are victims of our stereotypes.

The technical skills acquired in the services are second to none. Leadership, teamwork and communication skills are acquired in a unique setting and are refined sometimes in the most harrowing of circumstances.

A simple suggestion was to give greater recognition of these capabilities in the reshaping of the Australian Qualifications Framework. This way employers can get a more balanced view of the claims of the presenting service personnel. As part of the Skilling Australians Fund, the federal government committed also to fund projects for transitioning retiring service personnel into work. There has been no announcement on that front, but I will follow it up.

Then, why is education so powerful? I’m drawn to the writings of Amartya Sen, the winner of the Nobel Prize in Economics, who writes on the notion of individual agency. He says, “With adequate social opportunities, individuals can effectively shape their own destiny and that of others.” 1  While his thesis concerns developmental economics, Sen sees education as a key plank in building agency.

High quality education and training in a democratic society should have no lesser an objective. We owe it to all students but even more to those who put themselves in harm’s way so we continue to have the freedom to offer such training.

Borrowing again from Invictus, William Ernest Henley’s close of the poem says it better than me:

It matters not how strait the gate,
How charged with punishments the scroll,
I am the master of my fate,
I am the captain of my soul.

Note: I was most proud to share that over recent years four retired Service leaders have been engaged as CEOs of our TAFEs.

Federal government officials have confirmed that the goal of creating 300,000 apprenticeships under the Skilling Australians Fund will not be reached.

In last week’s Senate estimates hearing, the Department of Education and Training said the decision of Victoria and Queensland not to sign the agreement meant that the target of 300,000 apprentice commencements over five years would not be met.

“We now need to take into account the fact that Victoria and Queensland did not sign up to the National Partnership Agreement, so that element of the national partnership numbers would not be part of the arrangement,” Acting Deputy Secretary, Skills and Training, Dr James Hart said.

It was seized on by the Shadow Minister for Skills, TAFE and Apprenticeships, Senator Doug Cameron.

“At least there’s a concession now that you won’t make the 300,000,” Senator Cameron said.

The Minister for Skills and Vocational Education Senator Michaelia Cash laid the blame on the two Labor states who “rejected the money”.

“It is the two Labor states of Queensland and Victoria that did not sign by 30th September and, as a result, when a state does not sign up, there will be a reduction, it is not a concession,” Senator Cash said.

Officials also indicated that the federal funding set aside for Victoria and Queensland would be returned to consolidated revenue. Craig Robertson, CEO of TAFE Directors Australia is most disappointed with this approach.

“The Commonwealth would prefer to play politics with Victoria and Queensland than find a way to allocate those funds to increase apprenticeships,” he said.

TAFEs are among the finalists for the Australian Training Awards, with the winners to be announced in Sydney on November 15.

The finalists which were announced yesterday are:

VET researchers provide a look into new fields of study

Leading VET researchers showcased some of the latest fields of academic inquiry at the AVETRA research forum in Canberra on Friday.

Gitta Siekmann from the National Centre for Vocational Education Research (NCVER) gave a glimpse into her latest research project which taps into new data sources to show how the type of training provider can affect student outcomes.

Gerald Burke provided his insights into the recent history of training market contestability at the state and federal level, together with the impacts of VET funding decline.

Alex Ferry, Paul Edwards and Michael Wyndham looked at the vexed issue of duplication in units of competency.

Elaine Butler put the case for a national equity policy as part of the VET agenda.

The issue of VET teacher quality and alternatives to the current approach were canvassed in presentations from Teressa Schmidt and Barry McKnight, while the learning environment was under the spotlight from Susanne Francisco and Liam Frost-Camilleri.

The apprentice sector was the focus of several presentations. Erica Smith canvassed her recent project which examined apprenticeships across the G20 countries as well as an upcoming study which will look at the role of intermediaries in the apprentice system.

Phil Toner discussed the opportunities and the limits in the emerging area of higher level apprenticeships, with a focus on advanced manufacturing, while Keiko Yasukawao looked at advanced apprenticeships through a partnership between TAFE and an SME.

A great example of the linkage between teaching and applied research was presented by the team from William Angliss Institute. 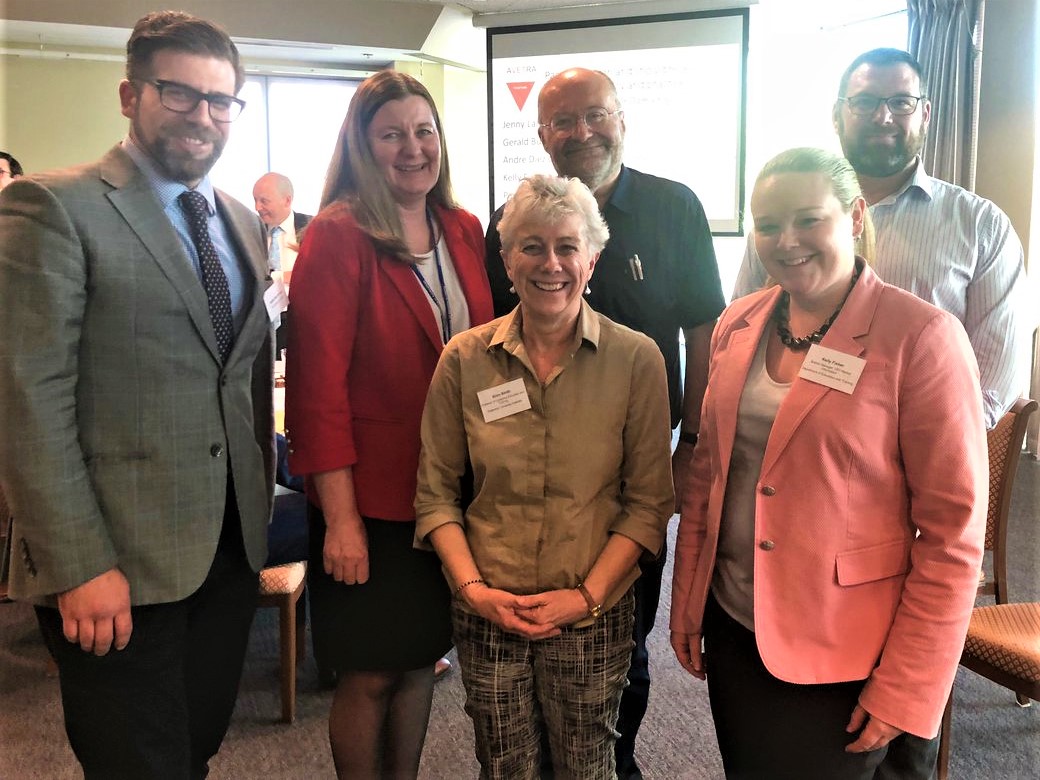 The Australian Industry and Skills Committee (AISC) has announced the 21 members who will make up the new Aged Services Industry Reference Committee (IRC).

The Aged Services IRC has been established to respond to the findings of the recently completed  Aged Care Workforce Strategy and to oversee the skilling requirements of the workforce.

More colleges having their applications knocked back, says ASQA

The Australian Skills Quality Authority (ASQA) has revealed that the rate of rejection of new entrants into the training market reached a high in the most recent financial year.

ASQA said the relatively high rate rejection rate demonstrates the value of ASQA’s work in increasing the scrutiny on applicants for initial registration.

The rate of non-compliance by training organisations also reached a high of 56.3% in 2017-18, something ASQA says is partly due to regulatory changes in 2016 that removed a rectification opportunity, and the maturing of ASQA’s risk intelligence which better targets poor quality providers.

The National Centre for Vocational Education Research (NCVER) has helped to unravel the world of VET with the latest addition to its VET Knowledge Bank which includes a series of landmark documents and a history with policies, publications, and a revealing timeline covering the myriad ministers and departments overseeing skills and training over the last 25 years. 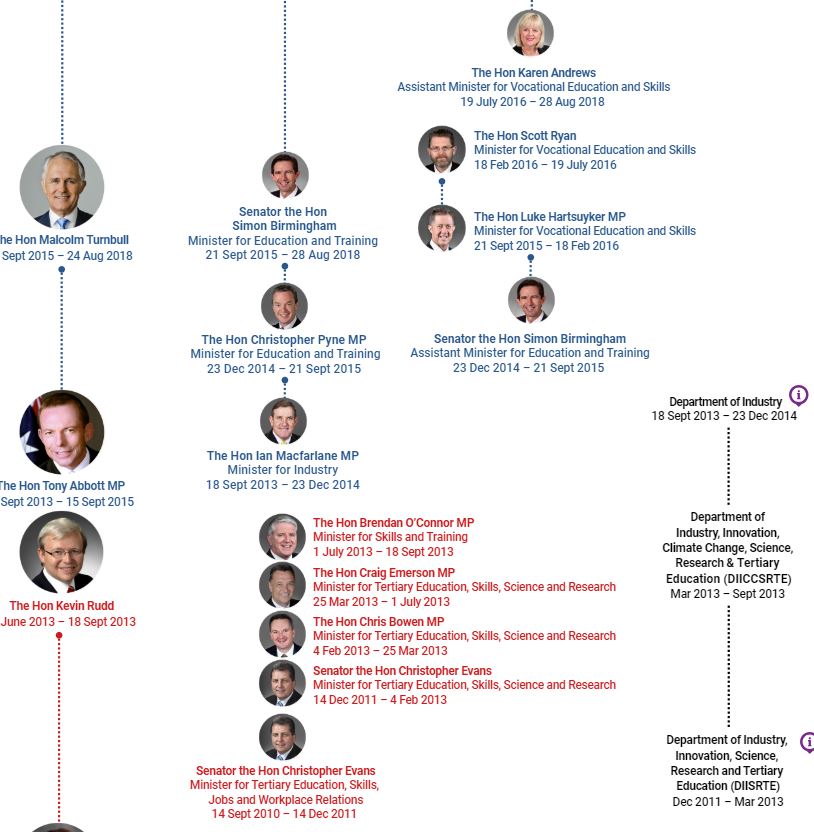 The Commonwealth Department of Education and Training is holding its 2018 Skills Forum in Sydney on Thursday 15 November from 11 am to midday.

The annual event is held on the day of the Australian Training Awards, and this year, will provide an update on the achievements of the VET Information Strategy – 12 months after its implementation to raise the status of VET.

Discussing the strategy will be some of the key partners – the National Rugby League, the Career Industry Council of Australia, Year 13, and Supporting and Linking Tradeswomen (SALT).

The forum will be held at the Theatre and Tasman Light Gallery at the Australian National Maritime Museum.

To attend, provide your details by email to: vetinfostrategy@education.gov.au by Friday 9 November.

The Australian Council of Deans of Education Vocational Education Group (ACDEVEG ) is holding its two-day annual conference on VET teaching and VET teacher education in Melbourne on 6 & 7 December.

With the title, ‘Building confidence in VET Practice’ it will feature an afternoon of practitioner-led workshops on Thursday, 6 December, followed by a research-based conference the following day.

There will also be eight research-based parallel papers, a panel of experts in VET teaching and VET teacher-education, and the presentation of ACDEVEG awards including the new VET teacher-educator awards in conjunction with PwC’s Skills for Australia.