Many eyebrows were raised around the sector last week when ASQA was announced as the approver of training products in the new environment of Industry Clusters. That is, from 1 January 2023 ASQA will decide whether training products are ready to enter the market. ASQA will replace the approval role currently held by the Australian Industry Skills Committee (AISC). The regulator approving the products that it will then regulate is an interesting decision.

What do we know? We know that the current AISC process has not been agile and has contributed to training products often taking too long to get into the market. We know that in the current process there does not always appear to be thought as to the downstream impact on training providers.

We understand that under the new model, Industry Clusters will have responsibility within their industry group for resolving the inevitable disagreements that arise between different parts of industry. This has been a role that has often been handed to the AISC currently.
We know that ASQA has been active in listening and trying to understand issues about training package implementation. However, ASQA has not had the authorising environment to make any significant impact on decisions that create implementation problems. We have reported on some of these matters in previous newsletters.

And we know that what is being proposed from 1 January 2023 will be that ASQA’s approval role does not equal the current role of the AISC. ASQA’s remit is much narrower. ASQA will be reviewing whether the Industry Clusters have developed training products that meet the training product guidelines. That is, ASQA has a checking function against the standards and policies prior to recommending to Skills Ministers the release of the training products. ASQA would not have a leadership role with industry like the AISC has currently.

In TDA’s submission in response to the Transition Advisory Group (TAG) proposal that has led to the Industry Clusters, TDA raised questions about who and what would be the role of the proposed independent approval body. This has now been answered.

One of the strengths that TDA sees in this new role for ASQA is that they will deepen their understanding of the training products prior to these products entering the market. Another strength in the regulator performing the checking function is that training products should be more consistent in how they are developed. As we know, discussions of implementation with training providers are part of the new model. Therefore, it is to be assumed that ASQA will be checking that co-design with RTOs has occurred prior to products being released.

At the end of the day there was little alternative other than ASQA for an independent approval body. If ASQA sticks to their brief of approving Industry Cluster training products against standards and policies, then the model is likely to be successful. In the spirit of collegiality and protection of our members’ ability to implement effectively, TDA will be keeping an eye on the regulator as they develop this new function (now that is a change of role!). 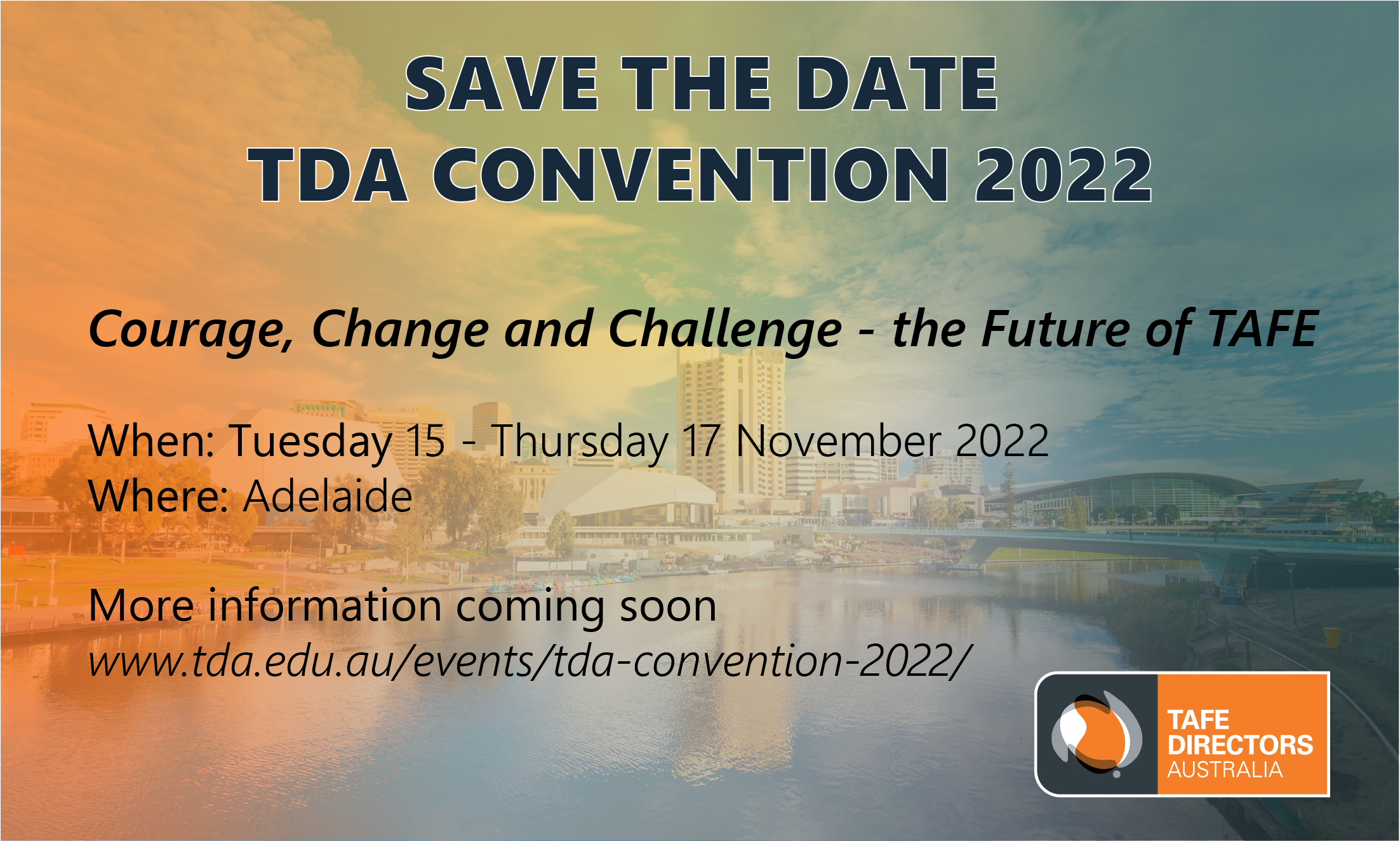 BAC was due to cease on 30 March 2022. Instead the scheme, which has seen thousands of apprentice enrolments, will be extended for three months to 30 June 2022, at the same rate of 50% of the apprentice’s wage.

The government says the extension will lead to an extra 35,000 apprentices and trainee enrolments, at a cost of $365 million.

The Completing Apprenticeship Commencements (CAC) wage subsidies of 10% in the second year and 5% in the third year will also be extended for apprentices and trainees signed up under BAC by 30 June 2022.

TAFE institutes are among 42 organisations that received a total of $10 million for projects to support women in the workforce in the latest National Careers Institute (NCI) Partnership Grants program.

RMIT received two separate grants worth $473,000 to support women in the areas of music, infrastructure, engineering and construction.

Central Queensland University receives $96,000 for its Reframing Our Future project.

The NCI said it received more than 100 applications for grants worth $25 million.

See all the recipients

The subsidy-fuelled surge in apprentice enrolments continued in the third quarter of last year, although at a more subdued rate.

Over the 12 months to the end of September 2021, the biggest increases in commencements were in Engineering, ICT and Science Technicians, up 429%, and Clerical and Administrative Workers, up 173%.

The federal government’s Boosting Apprenticeship Commencements 50% wage subsidy has sparked a rebound in enrolments since it commenced in October 2020.

In-training numbers for trades rose 21% over the 12 month, while non-trades soared by almost 60%.

Cancellations/withdrawals in the trades rose 39% over the year, while those in the non-trades were 69% higher.

Commonwealth, state and territory skills ministers have agreed to the central role for ASQA in the area of training product assurance, currently undertaken by the Australian Industry and Skills Committee. ASQA will initially take on the function until December 2024, after which a review will take place.

TAFETalks: Imagining an Integrated VET and HE Future, Wednesday 6 April 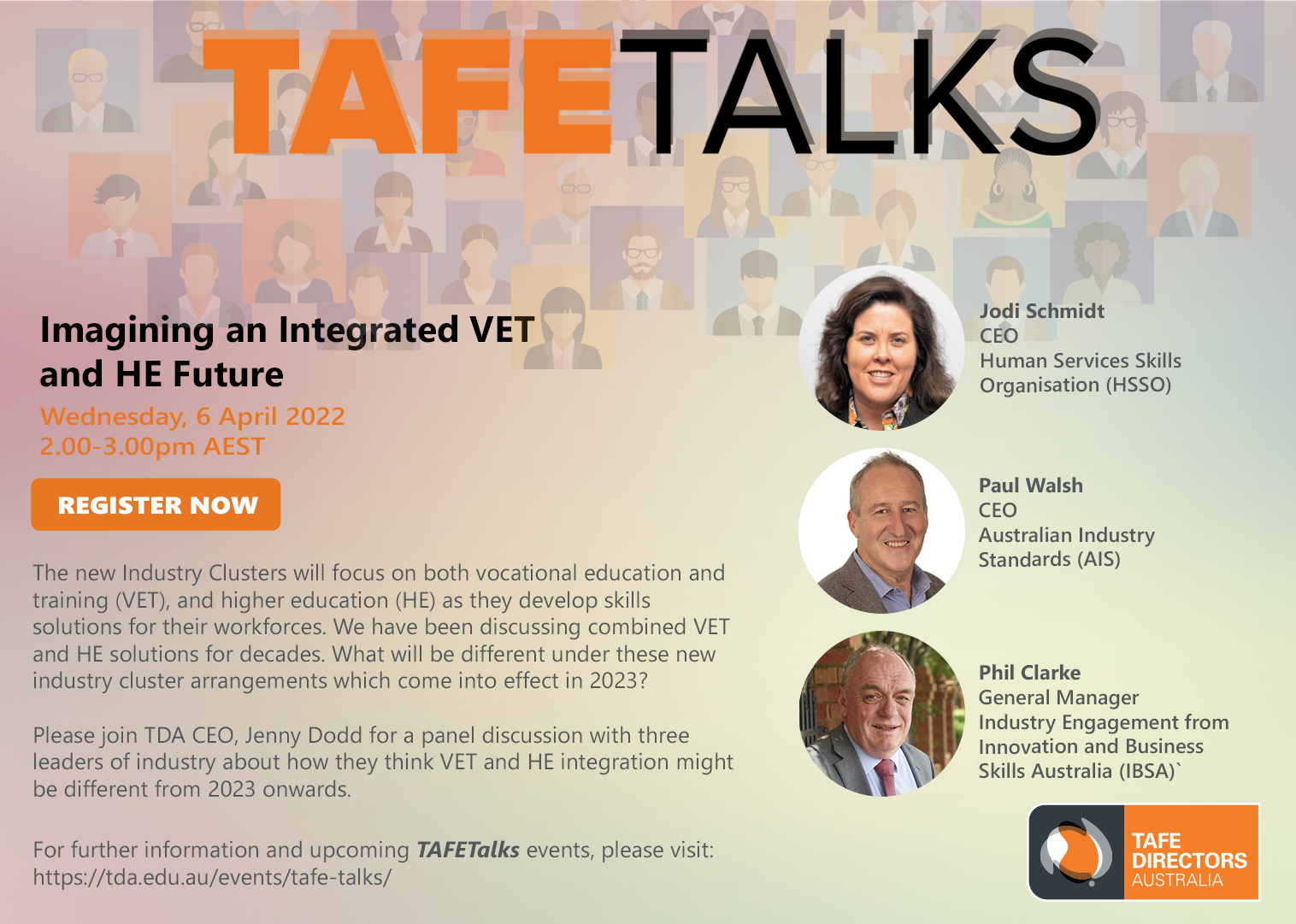 The new Industry Clusters will focus on both vocational education and training (VET), and higher education (HE) as they develop skills solutions for their workforces. We have been discussing combined VET and HE solutions for a long time. What will be different under these new industry cluster arrangements which come into effect in 2023?

Please join TDA CEO, Jenny Dodd for a panel discussion with three leaders of industry about how they think VET and HE integration might be different from 2023 onwards.

Australia and India edge towards recognition of qualifications

Australia and India will establish a taskforce to develop arrangements for qualifications recognition, including in the area of online and blended learning.

It aims to deliver outcomes within six months and will also address joint degrees and offshore campuses.

The goal of securing the recognition of Australian qualifications is a key long-term priority in the Australian Strategy for International Education 2021-2030.

The taskforce will consult with stakeholders to identify opportunities for the recognition of Australian and Indian higher education qualifications, and to make recommendations to improve arrangements based on best principles and practices in recognition. 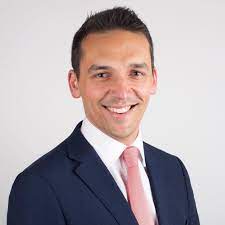 Mr Boyer grew up on his parents’ family farm in South West Victoria. His father was a teacher for four decades and his mother worked in the disability sector.

He studied law and arts at Monash University and practiced law briefly before starting work for a Labor MP. He was chief of staff to former education minister Jennifer Rankine and deputy chief of staff to premier Jay Weatherill.

He was elected in 2018 for the electorate of Wright in Adelaide’s north eastern suburbs and has served since 2020 in the shadow portfolios of education, skills and training, and veterans’ affairs.

The World Federation of Colleges and Polytechnics (WFCP) has announced the finalists for its Awards of Excellence that will be unveiled at the 2022 WFCP World Congress in Donostia-San Sebastián, the Basque Country (Spain) from June 15 – 17.

Box Hill Institute, TAFE Queensland and Central Queensland University/BHP are in the running for awards.

TAFE Queensland’s Mary Campbell is one of three finalists in the Lifetime Achievement Award.

Conference organisers have extended the early bird registration until March 31.

It’s the final day to have a say on issues surrounding the delivery of VET to secondary students in regional, rural and remote areas.

The Department of Education, Skills and Employment is currently undertaking a survey on some of the critical issues for the sector. The survey will close later today.

Have your say here

Much of the ambiguity surrounding microcredentials has started to be addressed through the release of Australia’s first National Microcredentials Framework.

It examines key issues such as a definition, learning outcomes, assessment, volume and depth of learning, currency and recognition.

“Microcredentials are unregulated, which differentiates them from much of the education system,” the framework says.

“This has led to significant variability in quality and transparency. Learners often compare microcredentials on the basis of incomplete information.”

Critically, it specifies that microcredentials require evidence that learning outcomes have been achieved.

“This verification builds trust and portability, providing education providers, learners and employers with confidence that a learner has achieved the stipulated knowledge, skills, or competencies.”

The federal government is providing financial assistance to people who relocate for short term agricultural work such as harvest work, under its AgMove initiative.

Harvest workers need to complete 40 hours of agricultural work over at least a two-week period to be able to claim up to $2,000 for Australians and $650 for eligible visa holders.