TDA congratulates the Hon. Brendan O’Connor MP and the Hon. Jason Clare MP who have been appointed to lead the skills and training, and education portfolios respectively.

In terms of TAFE’s business in international and higher education, these areas will remain with Minister Clare. For example, the finalisation of the review of the ESOS Act will be led by the Department of Education.

TAFE higher education courses meet a specific need in the market. They are always applied learning experiences and are generally delivered to smaller groups. Our courses have a strong focus on problem solving and project-based learning. With their industry alignment, TAFE academics pivot the degrees or associate degrees quickly to be responsive to local industry advisory groups.

TDA looks forward to working with the new government to demonstrate the power of TAFE in delivering great outcomes in both vocational and higher education.

Jason Clare who served as Labor spokesman during the election campaign has been appointed Minister for Education, replacing Tanya Plibersek who held the portfolio in Opposition and now moves to Environment and Water.

Senior Labor frontbencher Brendan O’Connor has been appointed Minister for Skills and Training.

The skills and training portfolio will be part of the new Department of Employment and Workplace Relations under Minister Tony Burke.

Both Mr Clare and Mr O’Connor are experienced former ministers in the Rudd and Gillard governments.

Alan Tudge who stood down from the Cabinet last December returns as Shadow Education Minister.

Sussan Ley, who was last week elevated to Deputy Leader of the Opposition, has been named Shadow Minister for Industry, Skills and Training.

TDA extends its congratulations to all the new ministers and shadow ministers.

Many in the VET sector will now be dealing with two separate departments under the latest Machinery of Government changes which effectively split responsibility for education and skills.

The Department of Education will be responsible for areas including school education, youth affairs and transitions, higher education, international education, research grants, and early childhood education.

Former senior public servant and Professor of Public Policy at the ANU, Andrew Podger said the new arrangements are “a considerable improvement on the structures the Morrison Government used, but they could have been much better.”

The new Administrative Arrangements Order takes effect on I July.

A watershed moment for the public service

A landmark change has come over the Commonwealth public service with the appointment of Professor Glyn Davis as the new Secretary of the Department of the Prime Minister and Cabinet.

He commences in the role today after serving as CEO of the Paul Ramsay Foundation, and in the wake of an eminent career in academia and government.

“Professor Davis will bring to the role of Secretary a deep understanding of public policy and will work with my Government in bringing about positive change for the Australian people,” Prime Minister Anthony Albanese said.

Professor Davis was Director-General of the Queensland Department of Premier and Cabinet, before serving as Vice-Chancellor at both Griffith University and the University of Melbourne.

But his credentials go further. He sat on Paul Keating’s committee charged with devising options for an Australian republic.

His first full time job was as a journalist with ABC radio Canberra, following in the footsteps of his father, Pedr, a noted motoring journalist, mother Dolores, a writer, and brother Tony who works at the Sydney Morning Herald.

He was educated at Marist Brothers’ College in the Sydney suburb of Kogarah that produced Labor luminaries Graham Richardson and Stephen Loosely.

Every boy’s dream was to play first grade rugby league for St George, he told The Age in an interview in 2005. “If you couldn’t do that, you wanted to become a NSW Labor senator, as a number of them did, he said. “If all that failed, then I guess you could go to university,” he joked.

Professor Davis’ focus on innovation and his background in higher education offer real opportunities for a sharper focus on the role of tertiary education in delivering the skilled labour force that Australia needs.

Also, his support for a more integrated VET and higher education system could add momentum to a much-needed re-shaping of the binary approach of the past.

TDA welcomes this appointment and extends its congratulations to Professor Davis.

TAFETalks: Register for a discussion, Wednesday 15 June, Self Assurance: what does it really mean? 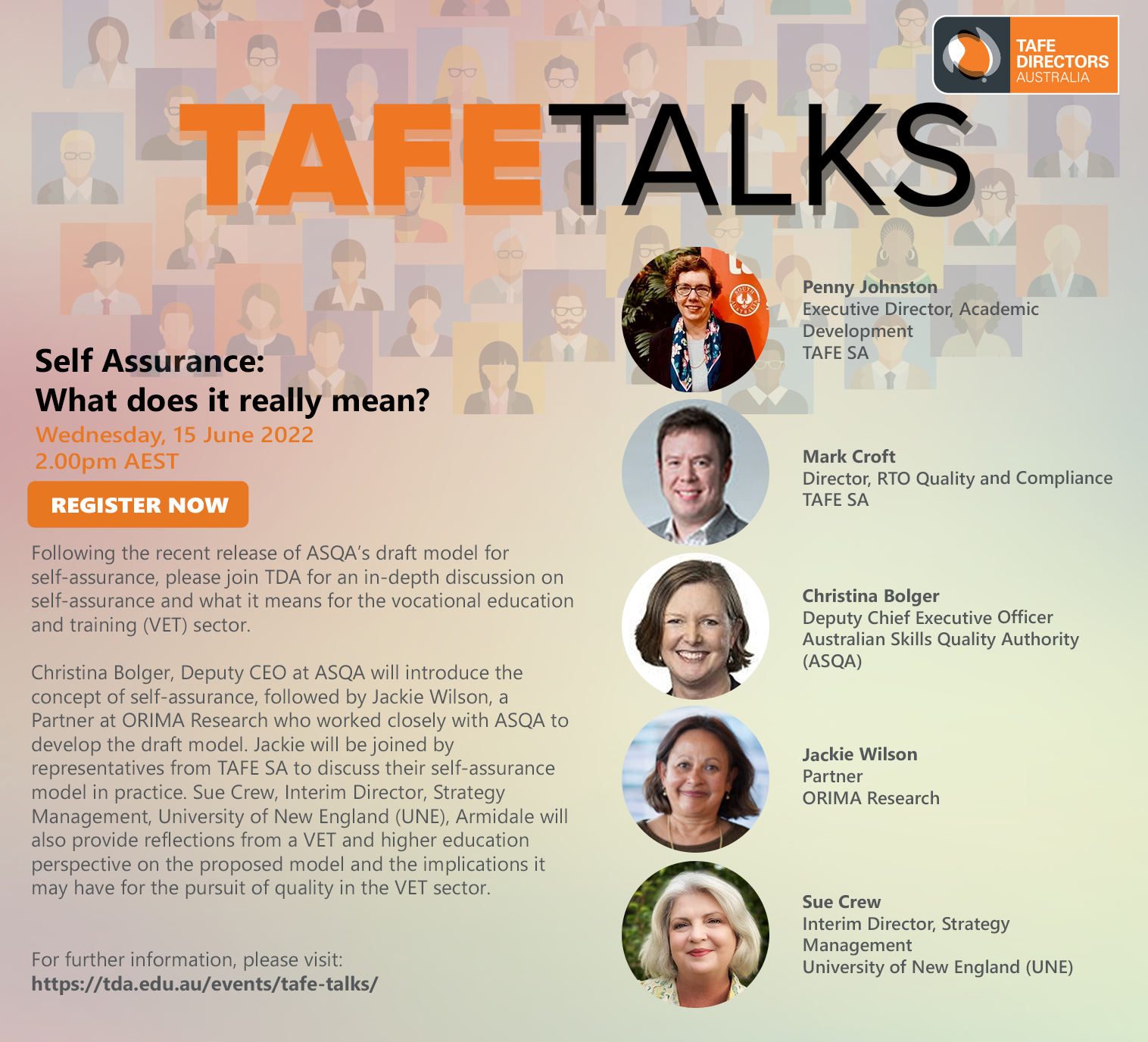 Following the recent release of ASQA’s draft model for self-assurance, please join TDA for an in-depth discussion on self-assurance and what it means for the vocational education and training (VET) sector.

Christina Bolger, Deputy CEO at ASQA will introduce the concept of self-assurance, followed by Jackie Wilson, a Partner at ORIMA Research who worked closely with ASQA to develop the draft model. Jackie will be joined by representatives from TAFE SA to discuss their self-assurance model in practice. Sue Crew, Interim Director, Strategy Management, University of New England (UNE), Armidale will also provide reflections from a VET and higher education perspective on the proposed model and the implications it may have for the pursuit of quality in the VET sector.

Guest speakers will include:

Registration:  To register for this event, please click here

AND for your diaries…

Description:
TDA is delighted to announce that we will be joined by Professor Sally Kift for a panel discussion on the scholarship of teaching and learning. Sally is a Principal Fellow of the Higher Education Academy (PFHEA), a Fellow of the Australian Academy of Law (FAAL) and President of the Australian Learning and Teaching Fellows (ALTF). Sally is a renowned higher education expert and academic and has published widely on transition pedagogy, legal education and student transition. Sally was a member of the Australian Qualifications Framework Review Panel that reported to Government in September 2019. Sally’s role will be to reflect on the discussions of our TDA members including:

The NSW government has announced an extra 70,000 fee-free training places as part of a renewed effort to boost the state’s skills-led recovery.

Treasurer Matt Kean said the state budget in just over a fortnight would include $82.7 million over four years to help accelerate the skills boom.

“This investment will deliver tens of thousands of new apprentices, trainees and full qualifications to help people get skilled for in demand jobs such as builders, hairdressers, carpenters, chefs, electricians and in the critical early childhood, aged care and disability care sectors,” Mr Kean said.

Almost a million people who completed training last year are about to be contacted as part of the National Student Outcomes Survey being undertaken by NCVER.

About 930,000 domestic students and 68,000 international students will be asked about post-training outcomes and satisfaction with training.

There will also be questions about the impact of COVID-19 on students’ training experiences, including the effects of online delivery, and the impact on apprentices and trainees.

RTOs with enough survey responses will receive a free report that compares the satisfaction and outcomes of their students with students nationally.

NCVER will be emailing RTOs to advise them about a promotional kit to help encourage student responses.

Results from the 2022 survey will be publicly available mid-December.

The South Australian state budget last week fleshed out the details of Labor’s plans for TAFE and skills that were central to its policy agenda at the March state election.

The Minister for Education, Training and Skills Blair Boyer said the government will build five government technical colleges, three in metropolitan Adelaide and two in regional South Australia that will connect to existing secondary schools and be associated with a TAFE campus.

The Minister for Education and Training Sue Ellery said Ms Payne’s extensive regional experience in the training sector will be invaluable in the role.

“Ms Payne has demonstrated strong commitment to working with regional stakeholders to ensure training meets the needs and expectations of students, industry and the community.

Ms Payne has more than 32 years of experience working in vocational education and training in the region, bringing extensive local and regional knowledge, and strong relationships with industry, community and stakeholders.

The college has recently seen a 23 per cent increase in course enrolments and a 26 per cent jump in apprentice and trainee commencements.

TDA extends its congratulations and best wishes to Jo on her appointment.

TDA extends its congratulations to Linda.

Two new resources have been developed to assist students in the VET and university sectors who are blind or have a vision impairment.

The e-Learning module and Guidelines have been developed by the National Disability Coordination Officer Program and the Australian Disability Clearinghouse on Education and Training (ADCET).

“The COVID-19 pandemic highlighted the need for accessible online learning so all students could continue with their studies,” ADCET Manager Darlene McLennan said.

“We need to do a lot more to make universities and VET inclusive of people who are blind or vision impaired. The new guidelines are a practical tool for teaching staff to make their online lectures and other learning resources accessible and inclusive of all students,” Ms McLennan said.

See the Online Access for Tertiary Students who are Blind or Vision Impaired Guidelines and complete the free e-Learning module to increase understanding of developing and facilitating teaching practice.

TAFE SA’s Teaching and Learning Team has been recognised with a national award for their work in making online learning more accessible and usable for students.

The team received an Accessibility in Action Award from ADCET for a person, team or project that “actively improves accessibility for students and staff”.

In response to the pandemic, TAFE SA’s Teaching and Learning Team responded with a range of measures to improve accessibility, including tools and resources for educators to enhance their online content.

Team member Marika Leopold said, “We fashioned a motto to support our approach – Fix, Flag, Future. Fix what you can now, flag what to fix soon, and identify what to address in the future.

“We’ve created a shared language across the organisation, emphasising accessibility as a critical element of inclusive education and a pillar of educational design.” 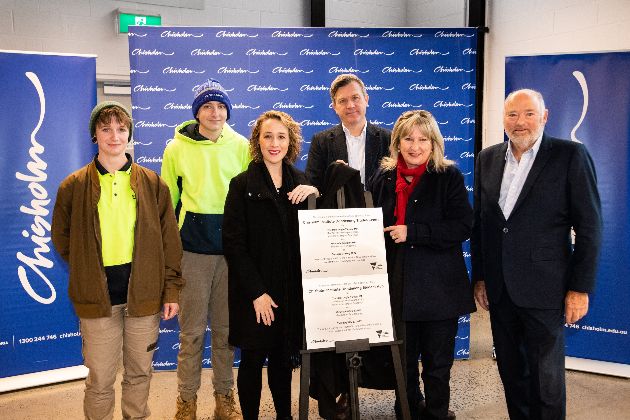 Five buildings erected in the 1980s have been transformed to create the $6 million trade centre for plumbing, carpentry and electrical training.

The development was opened by the Minister for Training and Skills and Higher Education Gayle Tierney and the Member for Dandenong Gabrielle Williams.

Applications open today for the Global Footprints Scholarships which provide an $8,000 grant to young Australians to travel abroad for work experience in areas of sustainability.

It gives young Australians with VET backgrounds, aged 18-23, the opportunity to travel the world, learn about sustainability and work in areas that shape a better future.

The scholarships are available for agriculture, horticulture and trades in the areas of manufacturing, construction, transport and logistics, and hospitality.

Next week’s TDA newsletter will be published on Tuesday 14 June owing to the Queen’s Birthday public holiday in many states and territories on the Monday.

Also, in next week’s newsletter, registrations will open for TDA Convention 2022 ‘Courage, Change and Challenge – the Future of TAFE’ on 15-17 November 2022 in Adelaide.

TAFETalks: Self Assurance: what does it really mean?
15 June 2022
Register here

TAFETalks: The Scholarship of Teaching and Learning
27 July 2022
Register here