Most of you will have now heard the news that TDA’s Chief Executive Officer Craig Robertson has stepped down from TDA.

After more than four years leading TDA, Craig has left TDA in order to take up the appointment of the inaugural Chief Executive Officer of the Victorian Skills Authority (VSA). Craig will take up his position with the VSA on 23 August.

For long time readers of the TDA newsletter and Craig’s column, you will know that he has a penchant for putting VET commentary to song. If you missed his Christmas Ode to Vocational Education and Training in Australia for 2019 to the tune of Jingle Bells, it has been preserved for posterity here – and it is sure to bring a smile to the face of even the most hardened VET warrior.

It seems fitting then, that we should bid Craig farewell in song. For The Sound of Music fans, the song ‘So Long, Farewell’ will be familiar to you, but if you haven’t seen or heard of it, you may wish to view it here first.

From all of the staff at TDA, this song is dedicated to Craig.

Regretfully they tell us
But firmly they compel us
To say goodbye to you.

So long, farewell, auf Wiedersehen, good night
We promise to keep up the thrilling fight

So long, farewell, au revoir, auf wiedersehen
We know that CBT made you insane

So long, farewell, auf Wiedersehen, goodbye
The Monday morning news will be so dry

So long, farewell, auf Wiedersehen, goodbye
With VET reform, we know it’s do or die

Jenny will fill the role until a permanent CEO is appointed. It follows the resignation of CEO Craig Robertson who finished on Friday and will take up the position of inaugural CEO of the Victorian Skills Authority. 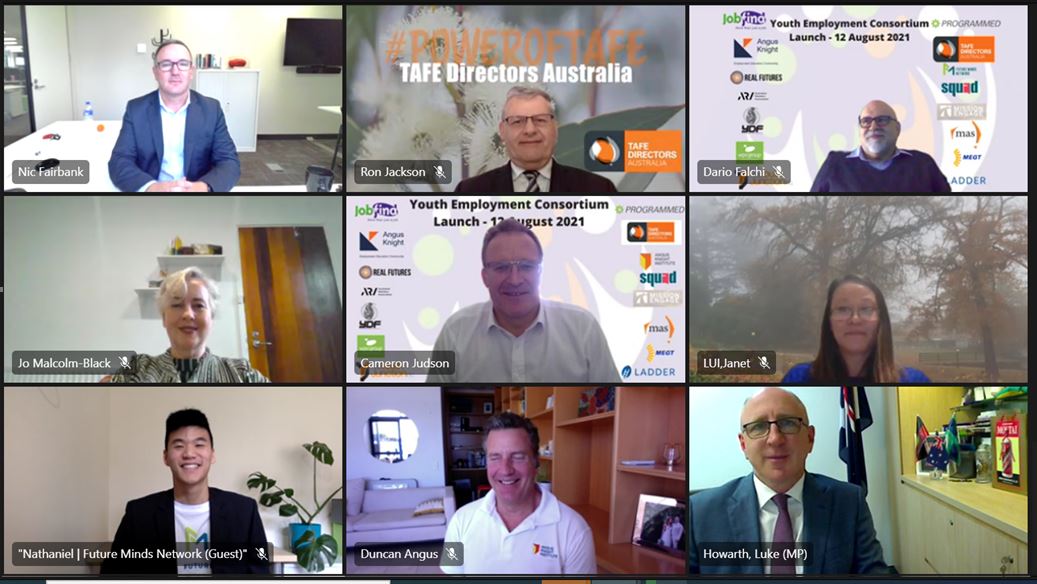 TDA is proud to be part of a new initiative, the Youth Employment Consortium, which has pledged to place 5,000 unemployed young people into jobs.

Jobfind, part of the Angus Knight Group, has been the force behind the creation of the consortium of employers, educators and not-for-profit organisations committed to tackling youth unemployment.

AngusKnight CEO Cameron Judson described youth unemployment as Australia’s most serious social and economic challenge, and said that under Jobfind CEO Karena Newland, the consortium was in a position to deliver “real hope, skills and employment outcomes for young people”.

Mr Howarth noted that “…young people have been hard hit by the pandemic, and as we emerge, though, I’m confident that the strength of our youth to fill their potential going forward and make a real contribution to the recovery. The time is ripe for that – there’s a real opportunity.”

The 2021 Young Australian of the Year Finalist and CEO of Future Minds Network, Nathaniel Diong is the consortium’s first youth ambassador. He highlighted the scale of the youth employment challenge, noting that 85 per cent of the jobs young people will work at in 2030 don’t even exist yet.

“Above all, we need to equip young people with the skills to adapt to uncertainty – and we can do that through entrepreneurship education,” he said.

More than 180,000 apprentices signed up under wage subsidy scheme

The number of apprentices and trainees signed up under the federal government’s Boosting Apprenticeship Commencements (BAC) wage subsidy program has reached more than 180,000.

In the Senate last week, Senator Michaelia Cash provided the latest enrolment numbers under the program, which provides a 50 per cent wage subsidy for employers who take on new apprentices or trainees.

Officials from the Department of Education, Skills and Employment told a Senate Estimates hearing in June that enrolments under the BAC program had reached 153,770 at the end of May.

The BAC program commenced last October and will run, uncapped, until March next year. Under changes announced earlier this year, employers who engage eligible apprentices and trainees will be paid the wage subsidy for a full 12 months from the time of sign-up. 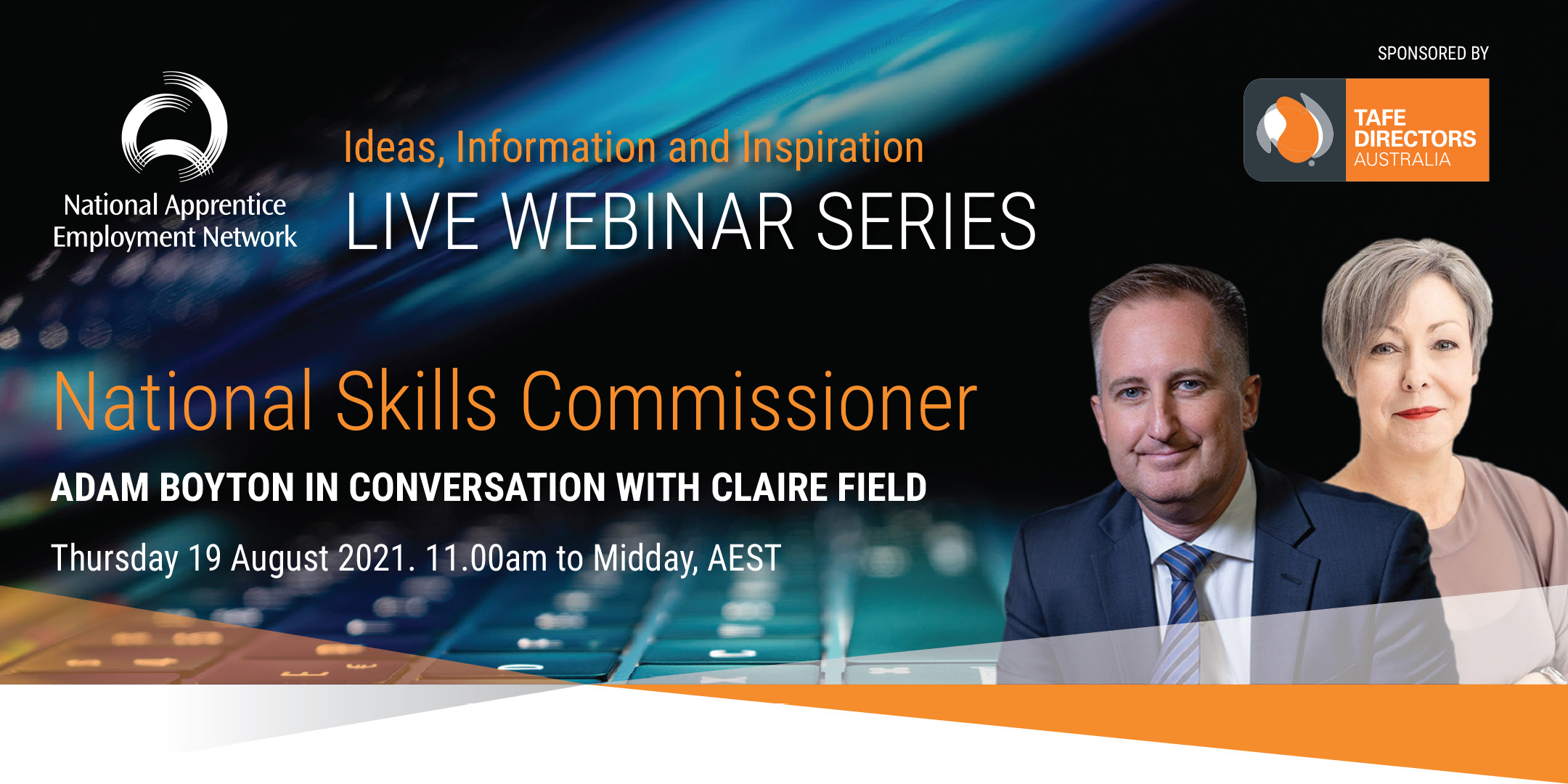 TDA is pleased to be sponsoring a live webinar this Thursday, hosted by the National Apprentice Employment Network (NAEN), featuring National Skills Commissioner Adam Boyton in discussion with Claire Field.

The webinar is part of NAEN’s ‘Ideas, Information and Inspiration’ series and will run 11 am to midday AEST, Thursday 19 August.

The National Skills Commission is leading a series of critical areas of work in the VET sector including the Skills Priority List, efficient prices for VET qualifications, the Australian Skills Classification, and undertaking a study of the care workforce labour market.

The Australian Industry and Skills Committee (AISC) has released its National Industry Insights Report – a collection of skills, training, employment and labour market information across the economy.

The report includes analysis by industry sector as well as a National Skills Overview which examines cross-industry insights.

One of the key findings is the strong industry demand for cross-sector skills such as adaptability, analytical, digital, and collaboration skills.

Chance to have a say on assessment practices in VET

The Ithaca Group, along with the VET Development Centre, is leading a series of conversations with VET practitioners to share current thinking on assessment validation, recognition of prior learning and other common assessment challenges.

The aim is to test research findings with practitioners and explore perspectives on what constitutes high quality assessment practice.

Insights from the process will inform work on quality reform by the Department of Education, Skills and Employment. This is particularly designed for VET coordinators, assessors and quality managers.

Participants with receive a certificate of participation for practitioner professional development. The sessions are:

The webinar focussed on the work of the Expert Panel that was established to provide advice on how Australia’s VET system can most effectively respond to digital change. A key feature was its recently released Digital Transformation Skills Strategy, ‘The Learning Country’.

Three members of the panel, Dr Claire Mason, Professor Aleksandar Subic and Mark McKenzie outlined the key issues and some of the critical proposals in the strategy.

A recording of the webinar is now available here on the panel’s website.  Alternatively, you can head straight to the highlight’s page and choose which question you’d like to hear answered by the panel members.