Keeping up with the population pressure – comment by CEO Craig Robertson

Keeping up with the population pressure - comment by CEO Craig Robertson

On Tuesday last week the resident population of Australia ticked over 25 million.

The ABS population clock shows the ins and outs of our growth, so to speak. Someone is born every 1 minute 42 seconds and someone dies every 3 minutes 16 seconds. A new resident arrives from overseas every 61 seconds and an Australian resident leaves to live overseas every 1 minute 51 seconds. Our growth is based on 1.9 births per death and 1.8 new arrivals over each departure.

The impact is in Sydney and Melbourne. You only need to visit their CBDs to see the huge infrastructure projects states have underway to ease congestion and house their citizens.

On Thursday last week the NCVER released the latest figures on funded enrolments in vocational education and training for the first quarter of 2018, reporting a decline of 3.7% compared with the same period in 2017. While there is caution from NCVER about data integrity, the message is still one of continuing decline in training.

How do we reconcile these trends? We can’t. Most iterations of VET funding policy in the past have recognised the failure of capital markets (banks will not – and should not – lend for education or training because of the fragile nature of the returns), so we can’t blame the banks. We all look to governments to create conditions conducive to economic growth, which includes training skilled workers to support economic outputs and improve our effectiveness.

Since Earl Page advocated for federal funds for roads in the bush, Menzies funded school science laboratories in part responding to the strike of Catholic schools in Goulburn in 1962, and Whitlam transformed the education landscape, the Commonwealth has made specific purpose payments to states and territories to show citizens it also cares for these issues.

For VET that’s the National Agreement on Skills and Workforce Development. First struck in its current form in 2012-13 it distributed $1.389bn to states and territories and grew to $1.495bn over the next five years to 2017-18, thanks to indexation. Over that period, however, the working age population grew by six percent. In effect, the effectiveness of the federal Government’s contribution to VET reduced by six per cent.

The Commonwealth makes other financial contributions, which I’ll talk about in future newsletters, but the funding theme is consistent – decline.

With well over half the projected new jobs in Australia needing VET qualified workers, the time for response is urgent.

In the meantime, TAFEs are getting on with the job, against the odds.

Many are training the skilled workers needed for Australia’s infrastructure response. Holmesglen Institute is training workers for the Melbourne Metro Tunnel Project and TAFE NSW has been the key training partner for Barangaroo on the Sydney foreshore.

Peter Costello famously implored us to have the third child as one for the country. Those children are now starting high school and in five years’ time will make decisions about post-school options.  The Commonwealth’s interest would have dropped a further six per cent by that time.

The federal government has injected an extra $128 million into its flagship Pacific region vocational training facility, to be re branded as the Australia Pacific Training Coalition.

Formerly known as the Australia-Pacific Technical College (APTC), the centre, which is managed by TAFE Queensland, has graduated some 12,000 students since its inception in 2007.

APTC  Stage 3 was launched in Apia, Samoa by the Minister for Foreign Affairs Julie Bishop with guests from the Samoan government, TAFE Queensland, the Australian High Commissions in Fiji, Solomon Islands and Papua New Guinea, Vanuatu University and the Department of Foreign Affairs and Trade 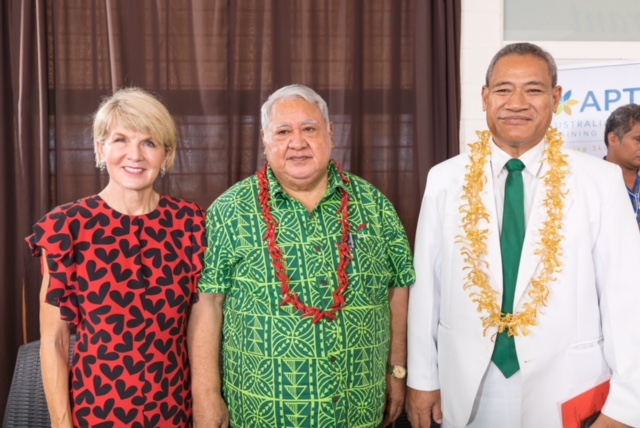 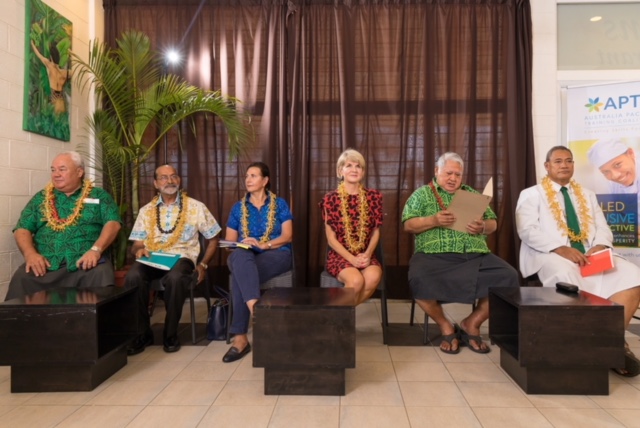 The number of students in government-funded VET dropped by 3.7% to 608,500 in the 2018 March quarter compared with the same period in the previous year – something the government will be hoping can be put down to “implementation issues” with the latest National Centre for Vocational Education Research (NCVER) series.

The CEO of the Australian Chamber of Commerce and Industry James Pearson said the figures highlighted significant concerns about the neglect of VET by governments at all levels.

“How much longer do we have to witness the decline in VET before governments act?” he asked.

In three months to March, compared with the previous corresponding period, the number of TAFE students fell by 7.2%, while those at private providers increased by 3.1%.

NCVER noted this was the first in a new series and some training authorities may not have reported, meaning the data should be treated with caution.

The number of students successfully completing units of study under the revamped VET student loan scheme has increased significantly, and is producing “great results”, according to the Assistant Minister for Vocational Education and Skills Karen Andrews.

The latest statistical report on the VET Student Loans (VSL) program shows a completion rate for units of study of 82.4% for 2017, up 17 percentage points on the former VET FEE‑HELP (VFH) scheme.

“This increase is even more significant when you take into account the fact that the 2017 VFH unit completion rate had improved 6.2 percentage points on the 2016 rate,” Ms Andrews said.

“The government designed the VET Student Loans program to exclude those providers who were trying to take advantage of students, and these results demonstrate the government is achieving that aim.”

Over the full year, 211 training providers were approved, with 42,220 students funder under the program.

Apprenticeship options not being explained to high school students

Many senior high school students are unclear about apprenticeships because schools place too much pressure on them to enter university, according to the post-school career advice platform, Year 13.

It’s report, ‘After the ATAR: Understanding How Gen Z Make Decisions about Their Future’, shows that many students are left in the dark because of a lack of information from schools about anything other than university options.

An article in The Australian says that this is likely to see many students make poor decisions about their post-school education.

“Of survey respondents who did not consider the apprenticeship option while in high school, 49 per cent said that, had they known more about this option, they would have considered an apprenticeship more seriously,” the article says.

Year 13 co-founder Will Stubley said the imbalance in understanding about post-school options caused students to rule out pathways that might be highly aligned to their interests and personality profile.

A chance to be 'immersed' in China's vocational training culture

It says that the “immersive experience” has been sanctioned by the Anhui education ministry and represents a rare opportunity for Australian VET leaders to take a “deep dive” into one of the engine rooms of the country’s training system.

It is designed to develop real learning for senior executives primarily engaged in areas of VET other than transnational sales and is limited to 15 people.