I said I was. My confidence is not borne from the Joyce Review or the Commonwealth’s reforms, COAG’s Roadmap, the AQF review, the review of higher education provider standards or the forthcoming prognostications of the Productivity Commission, although these all help.

Nor is it borne solely from the new lease of life in the federal bureaucracy toward VET, although that will now be tested. Federal responsibilities for VET will be merged into an expanded education, skills and employment portfolio, some six months after leaving the education portfolio following the federal election!

I’m confident because vocational education is right for the times.

This past week, much has been made of Australia’s performance in PISA, the OECD program for measuring educational effectiveness. Last year 14,273 15 year-olds representing 779 Australian schools were assessed in reading, maths and science. For the first time Australia is back to the OECD average. While that may be due to other countries leapfrogging us, there are two disturbing results.

Firstly, as the graphs below show, we are in decline in these important foundation skills. Secondly, we are not lifting the results of those from disadvantaged backgrounds. I heard one commentator say we have too many students in disadvantaged circumstances in disadvantaged schools. Our education driven egalitarian ideal seems a shattered dream.

Clearly, Australian schools have a challenge on their hands, but these results have a flow-on. The students of 2018 will be entering post-school life from the end of next year. In a world of work where basic skills set the foundation for the head and heart worker and entrepreneur (as presented by Deloitte during the year) a large proportion start at risk. Universities cannot be the sole solution. They now need to be confident of each student’s prospect for success if they want to protect performance levels which sets their growth funding.

A new intervention is required if Australia is to recover, and vocational education is the logical response. Past cohorts of PISA students have formed the pools for the Longitudinal Survey of Australian Youth (LSAY) administered by NCVER. A fantastic (although somewhat alarming) visual shows the movement of PISA students after school. Very few choose VET first off, clearly favouring university or work, or in a few cases, an apprenticeship.

Major structural reform of vocational education is needed, beyond that proposed by Joyce.

Time is short. Add the other news this week of poor economic growth, suppressed wages and failing productivity, and genuine (structural) reform is even more urgent.

The issue will compound. The population of 15 year-olds in 2018 was the lowest for many years and now there’s a bubble of about 30,000 extra school students per year moving through from late primary school, before we take account of new migrant families.

The matter is critical. Many countries in our region, China chief among them, are looking to vocational education to enliven their economic growth and to value-add to their economic outputs. We can’t afford to be left behind!

Good news at the end of the Parliamentary year. On the last day of sitting, new arrangements for Tuition Protection for VET Student Loan (VSL) and FEE-HELP were passed. The Government proposed that all providers of VSL and FEE-HELP needed to sign-up to the government operated Tuition Protection Scheme through a per-student base administration fee plus a risk-based premium. TAFEs were to be subject to the base administration fee only, however in amendments put to the Senate and agreed by the Government, TAFEs are excluded from the administration fee as well. The Senate accepted that the governments owning and governing TAFEs would always protect the interest of TAFE students in the highly unlikely event they were displaced and therefore fees to the TPS were not needed. We are grateful for the Government’s decision.

Next week is our last newsletter for the year and promises a Christmas Carol of some form!

PM's big public service shake-up could be just the start

Prime Minister Scott Morison’s major shake-up of the federal public service last week could be the start of a wider overhaul that will include government agencies and boards.

The Secretary of the Department of Employment, Skills, Small and Family Business Kerri Hartland was one of five departmental heads who will not continue.

The changes, to take effect February 1, were described by government sources in an article in the Weekend Australian as part of a move to “burst the bubble”.

“The next phase will target more than 180 agencies and boards,” the article said.

“Some agencies will resist, citing the need for special treatment, but they’ll more often than not find themselves in the same position as the goat which is tethered in the Tyrannosaurus Rex enclosure,” the source said.

TDA Chief Executive Craig Robertson welcomed the shift of VET back to the education portfolio, noting the importance of integration and pathways in promoting higher level skills.

“It’s unfortunate that the structural changes may take some effort away from VET reform but we think it’s worth the trade off,” he said.

“It’s interesting to reflect that VET has tended to do better when it’s part of an integrated portfolio, for instance the Dawkins reforms of the late 1980s and those under then deputy prime minister Julia Gillard.”

The Council for International Education has agreed to review its national strategy and has appointed its first direct representative from TAFE.

Janelle has done an outstanding job in building the international portfolio at TAFE Queensland and will no doubt be a terrific advocate on the Council for all TAFEs and the broader VET sector.

The meeting also agreed that with the National Strategy for International Education 2025 at a mid-point, it was time for a “refresh”.

“After years of consecutive growth, Australia’s international education sector faces new challenges, a changing geopolitical environment, increased competition from traditional and non-traditional players, and the importance of ensuring international education becomes a sustainable feature of Australian society and the economy,” the Communique said.

International education saw its fifth year of consecutive double digit growth in 2018–2019, contributing $37 billion to the economy and supporting 240,000 jobs.

There will be a series of consultations on the revised strategy during February and March.

“The strategy seeks to position Australia as a country of choice for the provision of quality VET and as a leader in the development of a globally skilled workforce,” the announcement said.

A working group from the sector will be established to work with expert members of the Council to roll out the strategy, starting next year.

William Angliss Institute has extended its ties with Vietnam, with the signing of a memorandum of understanding with Van Lang University, one of Vietnam’s first private universities.

It includes a pilot project to review Van Lang University’s existing Bachelor of Hospitality Management and Bachelor of Tourism and Travel Management to make them more relevant and practical to industry.

William Angliss CEO Nicholas Hunt said the institute has been delivering training in Vietnam since 2001, and its onshore Vietnamese students are its largest international cohort.

“We welcome the opportunity to further strengthen our ties to Vietnam and help deliver quality training for the country’s expanding tourism and hospitality industries via this MoU with Van Lang University.” 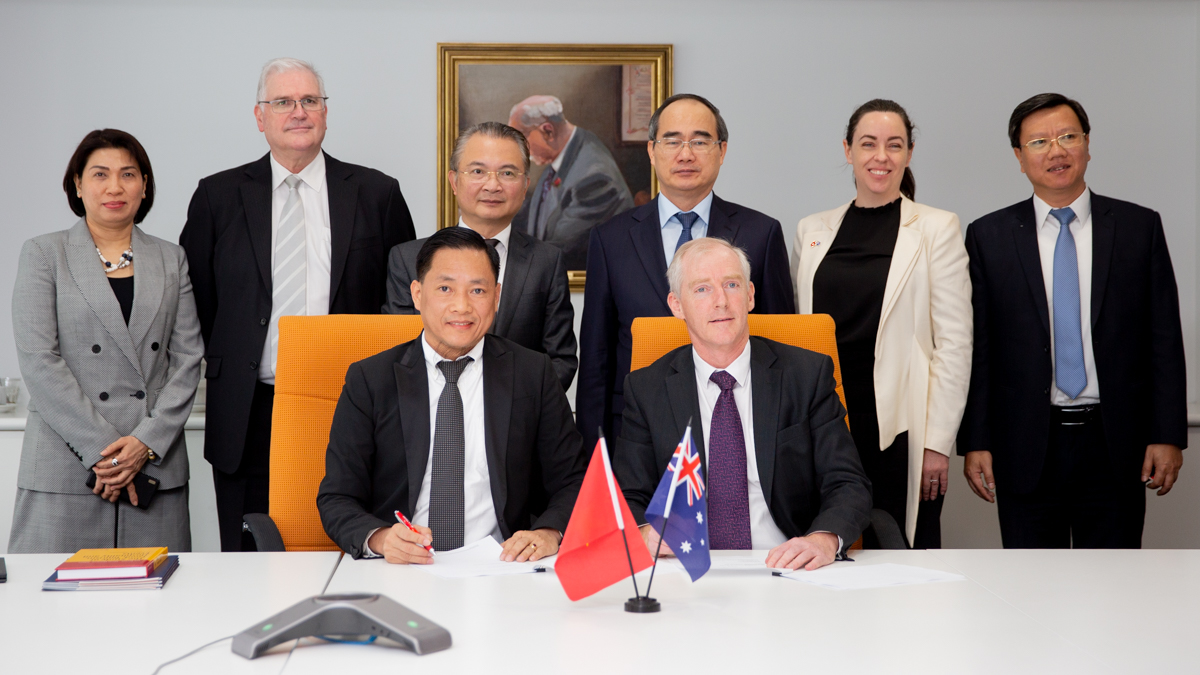 TDA joins roundtable to raise the alarm on student poverty

The roundtable at Parliament House Canberra examined support for an increase in the Youth Allowances to ensure that financial stress doesn’t jeopardise opportunities for students facing hardship.

TDA Chief Executive Craig Robertson said TDA was pleased to join with ACOSS and Go8 to “raise the alarm” at the poor living conditions students face, simply because of the low limits of the Youth Allowance, especially in the face of high rental costs.

“TDA will advocate for changes to income support to enable more people to access post school education and training, which ultimately lifts their life chances by which they can make returns to society,” he said.

Training providers have been set new higher compliance standards and face the possibility of adverse information about them being publicly released at any time, under laws introduced into federal parliament last week.

The National Vocational Education and Training Regulator Amendment Bill 2019 aims to improve the transparency of ASOA’s operations, while ensuring the regulator can make “appropriate, consistent and proportionate regulatory decisions.”

The measures are the first tranche of reforms to ASQA flowing from the 2018 Braithwaite Review and this year’s Joyce Review of VET.

The Minister for Skills and Tertiary Education Geoff Lee said the scholarships, worth $5,000 each year over three years, would help overcome financial challenges and enable recipients to complete apprenticeships.

“Some of those who will benefit from this financial support include regionally-based apprentices, students with a disability, Aboriginal apprentices and women in non-traditional trades.

“For some people, they are the sole financial supporters of their family and have difficulty buying tools for their trade while other people travel hundreds of kilometres just to attend their training.”

The scholarship program which honours the memory late Bert Evans boasts an 80 per cent completion rate.

Tickets are on sale for the Youth Futures Summit being held 20-21 April next year at the Melbourne Cricket Ground.

The summit will explore the problems and challenges young people face in education, employment, and transitions from education to employment.