Canberra, we have a problem! – comment by CEO Craig Robertson

Canberra, we have a problem! – comment by CEO Craig Robertson

Most of us were too caught up in COVID to celebrate the 50th Anniversary on April 17 of the safe return to earth of the damaged Apollo 13.

On the evening of April 13, with Apollo 13 shooting to the moon 200,000 miles from Earth a spark from a routine procedure ripped apart one oxygen tank and damaged another. As the oxygen fed the fuel cells, power was reduced as well.

‘Houston, we have a problem!’ is now modern parlance, even if it was poetic license in the film of the same name.

If the mission of the Productivity Commission in reviewing the National Agreement for Skills and Workforce Development (NASWD) was to explore new frontiers for vocational education and training in Australia, there are over 330 pages to wade through to see if it has succeeded.

While the VET sector does that, there is one graph in the report, drawn from the Reserve Bank, which shows the true nature of the problem. The wages in return from vocational education way under-perform the return from undergraduate and graduate studies. 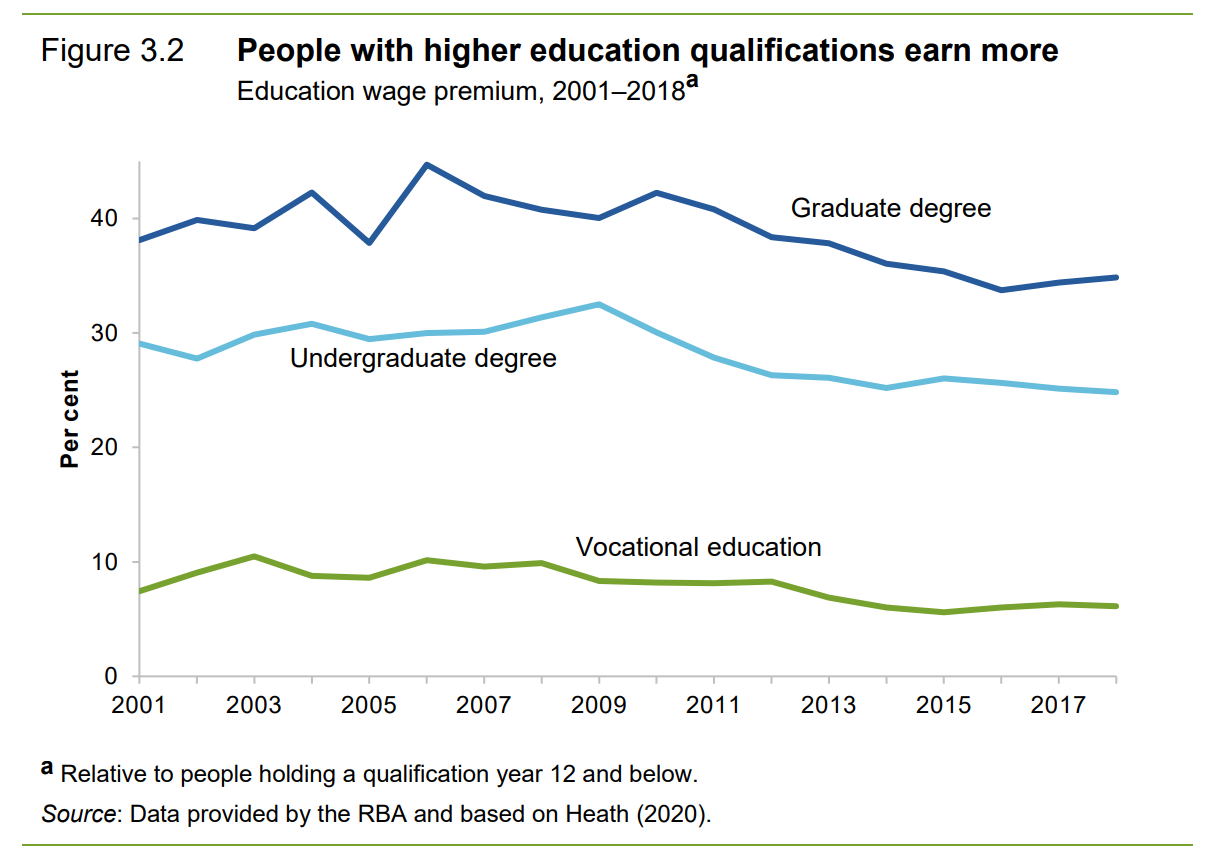 It is difficult to draw conclusions from a squiggly line, but the better years up to the GFC were probably due to skills shortage, until migration kicked in at a higher rate. For 2011 to 2013 the wages premium from the mining construction boom was probably flowing through, as well as overall wages from increased consumption resulting from the favourable terms of trade which followed. Since then it has been a decline.

The graph is disturbing in so many ways. Integration or cohesion across vocational and higher education has a 20 percentage point gap to overcome. We have a highly bifurcated tertiary system. AQF reform must surely be the first step to addressing the issue, but higher education and vocational education seem miles apart on starting the journey.

True reform would look at the circumstances in VET that has got it to this point.

Over the period of the x axis, Australian industry has run vocational education unimpeachably in the two areas that determine the y. Industry determines the content of a VET qualification and it is industry members – employers – who employ and pay VET graduates. The monopoly has resulted in an end point in 2018 on the graph of little more than a seven per cent wage premium, with most of that probably arising from other factors.

No doubt we could unpack the data and find a slightly different story, however, work by KPMG gives the same result. KPMG concludes – ‘the earnings premium from an average Vocational Education and Training (VET) qualification has not closed the gap with HE, and actually there is no significant improvement (on average) over finishing Year 12’[1].

Luck and a good dose of planned redundancies made it possible for Apollo 13 to return safely. The astronauts scuttled to the lunar landing module to save energy in the main space craft, and when it came time for re-entry they switched back power and themselves to the main craft, for a successful splashdown.

We don’t have planned redundancy in VET.  It’s one shot in the locker qualification content – what industry decides it needs for processes in a job, and nothing more. When the job changes along with the economy, what’s the back-up?

The Business Council’s Jennifer Westacott said last week that Australia needs to aim for wages growth. We all agree, but if that’s the case, basic re-wiring of the sector is needed. The current model doesn’t seemed to have worked for the last 18 years.

Much is being made of the National Skills Commission function. Dare I say, without higher education in its remit, let alone fundamental changes to vocational education, its mission is no more than a boat trip to New Zealand compared to the aspirations of Apollo 13.

NCVER should also be commissioned with an evaluation function. They could have been alerting the sector about its performance some time ago.

In the meantime, the PC may wish to contemplate where the benefits flowed from the last market reforms – introduced from 2012 through COAG agreement and the runaway VET FEE-HELP – clearly not to wages and possibly to some bottom lines.

Let’s aim for something higher Australia.

The Productivity Commission has made it clear that it believes the central tenet of the skills system – the National Agreement for Skills and Workforce Development (NASWD) – has failed and should be replaced.

The Commission’s interim report, released Friday, finds that the aim of promoting user choice and competition has not been met, and it calls for a better way to allocate the $6.1 billion that governments spend on VET.

“Governments should consider reforms to make the VET system a more efficient, competitive market, driven by the informed choices of students and employers, with the flexibility to deliver a broad suite of training options,” the Commission says.

Among its findings it proposes:

The Commission also bluntly tells the COAG Skills Council that its attempt at reform, contained in the recent draft VET Reform Roadmap, is headed in the wrong direction, particularly in regard to contestability and the creation of a competitive VET market.

“This highlights the danger that a new intergovernmental agreement may result in an ad hoc reform agenda,” the Commission says.

What the Productivity Commission says about TAFE

Describing them as the “goliaths of the VET system” the Commission says TAFEs receive payments from states and territories that “may be distorting competition” and violating competitive neutrality principles.

TAFE Directors Australia was critical of the Productivity Commission report for its failure to see the “abundant lessons” that the market did not have all the answers for the training system.

“We are waiting for the full report (in November) but we’re waiting to see what lessons the commission has drawn from the marketisation of training in some states and the debacle in student fees,” CEO Craig Robertson told the Financial Review.

VET expert Leesa Wheelahan from the University of Toronto expressed shock at the lack of regard for the recent experience of “privatisation, loan scandals, funding blow-outs and the decimation of TAFE”.

“We need to fund TAFE as a public institution that implements public policy objectives for the public good. Not private for profit dodgy providers interested in maximising profit at any cost,” she tweeted.

The Australian Chamber of Commerce and Industry welcomed the report but said it ignores the “elephant in the room”, namely the decline in overall VET funding.

“The report quite rightly draws attention to the need for the existing spend of $6 billion that Australian governments make in VET to be invested efficiently and effectively, but there appears to be a theme in the report that questions whether this investment might be less, rather than more,” ACCI CEO James Pearson said.

The Australian Education Union said the restoration of billions of dollars cut from TAFE funding must be central to the VET reform plan.

the Independent Tertiary Education Council Australia said the finding that skills targets will not be met is disappointing but not surprising, given the significant variation in policy priorities used to determine funding between each state and territory.

Professor Chapman AM was made an Officer in the Order of Australia (AO) for distinguished service to higher education, particularly in the field of economics and public policy, and to professional societies.

Also recognised was AiGroup CEO Innes Willox, with a Member of the Order of Australia (AM) for significant service to business, particularly to industry, and to the community.

TDA’s partner organisation in the Basque Country in Spain, TKNIKA, is leading the way to enhance advanced manufacturing and innovation across Europe.

Selected as the lead of several VET institutions in Europe and in conjunction with industry, the Centre of Excellence in Advanced Manufacturing will bring the skills and innovation dimension to developing manufacturing capability.

The initiative demonstrates the central role of vocational education to capacity building within industry. Perhaps there are lessons for Australia!

Read more and watch the video

The West Australian government has scrapped course fees for more than 3,000 displaced apprentices and trainees for six months.

Fees will be paid by the Department of Training and Workforce Development directly to training providers. Providers will be able to access the payments from July 1.

Those affected should contact the Apprenticeship Office Helpline on 13 19 54.

A new approach to VET excellence, where VET institutions drive skills adaptation in local regions, will feature in a free online conference next week, hosted by one of Europe’s leading VET think tanks.

The conference, “Centres of Vocational Excellence: Skills ecosystems for innovation, regional development, and social inclusion” will focus on the European approach to TVET excellence.

It is organised by TKNIKA, an advanced vocational training centre in Spain’s Basque Country.

It will showcase examples of five pilot projects approved under the first call for proposals for Centres of Vocational Excellence, and will provide a mixture of policy vision, strategy and practical examples to showcase the concept of excellence in VET in the European context.

Attendance is free but registration is required.

Webinar to explore the growth of TAFE bachelor degrees

A recent research report on the growth of TAFE undergraduate degrees will be the topic of a free webinar this Thursday, hosted by NCVER.