Education in Australia is awash with reviews. Political discourse would say it is governments at action stations. If there’s little coordination at the front line of action chances of success are limited, I would have thought, although progress on the odd battlefront isn’t something to be scoffed at here in Australia.

If there are all these battles, then what’s the war?

It’s the struggle many an advanced nation is facing – wage stagnation anchored to a long period of poor productivity growth. The sirens of alarm are numerous, from the Reserve Bank down.

How do these reviews hang together in the fight for the ongoing prosperity of this nation?

All worthy causes for battle but do they work together?

Joyce recommended forecasting of jobs, all jobs, coming together under the Skills Commissioner but this does not feature strongly in the discussion paper exploring the Skills Commission model. And whether that then leads to joined up funding policy between VET and higher education is less clear. Dan Tehan has been quoted as wanting a more seamless boundary between higher and vocational education, with ‘units of education that were interchangeable between the two sectors.’ The AQF is likely to signal alignment between sectors but whether it can unify is asking a lot of a non-legislated instrument with the power of a popgun. And the pathways review appears to be open to ‘recommendations to better support positive outcomes for young people’ while focusing on helping ‘students finding a route through increasingly complex learning pathways.’

In the chaos of Brexit, Theresa May managed to commission the Augar Report, an independent panel report to the Review of Post-18 Education and Funding in England, released in May this year. Faced with a range of issues not dissimilar to those facing us, a comprehensive review was formed, and a comprehensive report given.

Augar and his panel retreated to a first principles approach – the purpose of the post-school sector and its service to the economy and society of England. It was little wonder that they found:

According to authoritative academic research there has been no improvement in social mobility in Britain over half a century: increases in wealth and changes in the overall structure of the job market have had no impact on the relative chances of people born into less advantaged groups. Indeed, ‘rising upward and falling downward mobility in the mid-20th century are now being reversed.’

… on current trends and despite recent progress, it would take five generations for a low-income UK family to reach the average UK family income. This is slower than the OECD average and much slower than in Scandinavian countries with the highest income mobility rates.

….those born between 1945 and 1975 had much greater chances of social mobility than those born afterwards.

I suspect it is not much different here in Australia. The question is what’s guiding our reviews?

Robert McNamara, Secretary of Defense during the Kennedy and Johnson Presidencies was famed for his systems analysis and management through statistics control which had taken him to the top of the Ford Motor Company. These proved no match to the unconventional warfare across the Indochinese Peninsula of North and South Vietnam.

Conventional thinking may not work in Australian education either. Where is the bolder vision? The Mackenzie Research Institute is giving it a go. A discussion paper Fit for purpose? Reforming tertiary education in Australia[1] puts forward a bold plan. It warrants serious investigation.

Complacency is our enemy

What’s the benefit of an industry training model if common wisdom (and national data) tells us industry is stalled in a productivity funk? How useful is re-classifying qualifications across our sectors if there’s little will to bring regulation and funding reform with it to make the framework real? How useful are new categories of higher education providers if rusted regulation and funding limits change? What use are clearer pathways if they still lead to jobs with limited opportunities?

How worthy the battles if the war is being lost?

Augur is a model we could use for thinking about the big issues. Sadly, Brexit, or lack of it, may leave it gathering dust. We mustn’t either if we are going to achieve change of significance out of the reviews before us.

PS several weeks ago I mentioned TAFE Queensland was waiting approval by ASQA for seven years re-registration. News arrived this past week that it was given. Congratulations TAFE Queensland and to all the staff and leaders. TAFE as anchor institutions!

The new National Careers Ambassador Scott Cam says he’s focussed on taking the confusion out of the career development system. 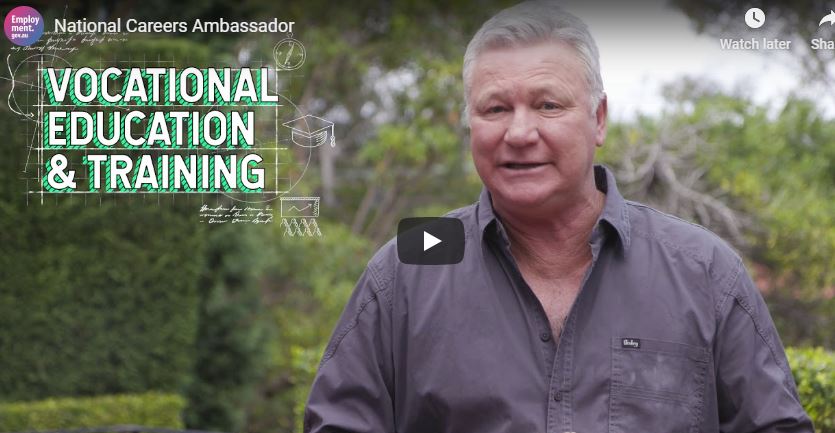 In a video message, the former apprentice and host of Channel Nine’s The Block, says he’ll be working with government, industry, education providers, career advisers, parents and employers to make the system “healthier, and more responsive to the needs of our workforce.”

Announcing the appointment, Prime Minister Scott Morrison said Scott Cam was proof that undertaking a trade can be a valuable, rewarding and successful career choice.

“For many years going to university has been the default expectation imposed on our young Australians, but it’s not the only path to rewarding and successful employment,” he said.

The National Careers Institute has established an e-Hub where it will receive feedback and undertake consultations.

The precinct has been designed to meet the changing training and education needs of the region, and will transform the delivery of TAFE courses in Australia.

Consisting of two new buildings, FLIP has the capacity to train nearly 4,000 students at one time.

One of the new buildings is dedicated to nursing and health, early childhood education, and hair, beauty and wellness. It includes model health wards and a fully-functional spa which replicate the modern workplace.

A second building recreates the real-world environment of technical trade sites for students enrolled in courses in building and construction, plumbing, electrical, engineering and electro technology.

“We now embark on a new stage of that journey as we ramp up our capability to deliver world-class training and education for students across Melbourne’s South-East, enabling us to meet the current and future needs of a rapidly changing economy,” Mr Varty said.

Stage 2 of the project will establish a modern, cutting edge, multi-level learning facility. 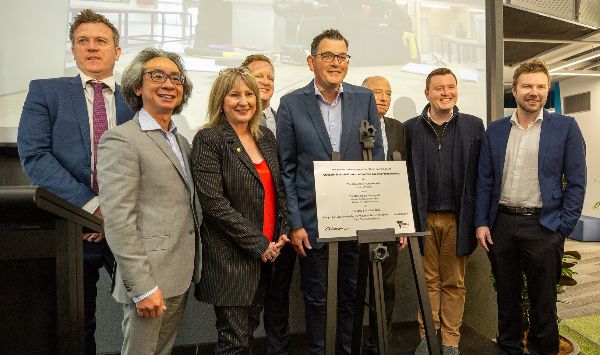 Group training organisations are achieving “substantially higher” completion rates of apprentices and trainees than direct employers in small and medium sized businesses, according to a new study by the National Centre for Vocational Education Research.

The CEO of the National Apprentice Employment Network (NAEN) Dianne Dayhew said it was encouraging to see the approach of group training validated by the research.

“The care and support that is provided to apprentices and trainees is a distinguishing feature that can make a real difference between successfully completing and dropping out,” she said.

Melbourne’s La Trobe University has received a key approval for its Bachelor of Technology Education, a specialised course for tradespeople and engineers with industry experience to upskill and become product design and technology teachers.

Course coordinator Dr Karen O’Reilly-Briggs, pictured, says it’s the only course of its type in Australia as it prepares candidates to teach in two curriculum areas, and across sectors – secondary and VET.

The course has just been approved as meeting the requirements of the 2018 TAFE Teacher Agreement. It offers two years advanced standing (of a four year Bachelor degree) in recognition of candidate’s trade and industry experience.

Candidates can enrol part-time or full-time and there is also mid-year entry. Candidates are required to complete a total of 80 days professional teaching experience.

Dr O’Reilly-Briggs, herself, worked for almost two decades as a qualified boilermaker before turning her hand to teaching at TAFE and then research.

She studied a PhD at La Trobe in the area of engineering trade vocational education and became a  lecturer and researcher, as well as overseeing  programs including the Bachelor of Technology Education.

The Chair of VTA Allison Jenvey commended Andrew on his commitment and achievement during his term leading the Victorian TAFE sector.

“In this period the profile, role, culture, systems and processes of VTA evolved rapidly, alongside similar evolutions of TAFEs themselves.

“We certainly wish him well in his future pursuits, and are very happy to retain him within the Victorian TAFE sector,” Ms Jenvey said.

Andrew will finish with VTA at the end of the year.

TDA extends its appreciation to Andrew for his contribution to the state’s TAFE sector and wishes him every success in his new role at Holmesglen.

The VET sector’s reliance on training packages is given critical attention in a new podcast from the National Centre for Vocational Education Research.

VET-in-schools programs work … at least for a while

A new study has found that VET-in-schools programs provide improved prospects of work and financial rewards, but some of the benefits are not long lasting.

Melbourne Institute researchers have analysed more than 40,000 students from three groups of 15 year-olds in the PISA (Programme for International Student Assessment) from 2003, 2006 and 2009 who were tracked annually in the Longitudinal Surveys of Australian Youth (LSAY).

It found that upper-secondary VET programs improved the chance of full-time employment with larger gains from programs that included workplace learning, most notably  apprenticeships and traineeships.

“The head-start in the labour market over the first seven years is estimated to provide upper-secondary VET participants with extra earnings that are equivalent to receiving a one-off payment at the time of leaving school of $26,408 for VET without workplace learning, $39,954 for VET with workplace learning, and $60,294 for apprenticeships/traineeships,” the study found.

“However, over time their head-start diminishes because nonparticipants find better jobs, either because they graduate from university studies or they change jobs.

“After seven years since leaving school, we observe no difference in the rates of full-time employment, job earning capacity, job satisfaction or rate at which a job is reported to be a career job,” it said.

The report recommends future work to better understand the outcomes from school-based VET over a working life as the job-specific nature of VET – in addition to the lower levels of attainment of certificate III qualifications and above – means that VET graduates may be more sensitive to changes in skill demands, which could be a disadvantage for them in their later career.

The Australian Apprenticeships & Traineeships Information Service (AATIS) is convening a series of information sessions around the country that will provide resources for students, job hunters, career changers, parents and other influencers.

The sessions in Adelaide, Geelong, Melbourne, Perth, Launceston, Hobart and Sydney will showcase the Australian Apprenticeships Pathways website, the My Gain YouTube channel, and other resources.

They are aimed at individuals and organisations that work with students and job hunters, such as career advisers, schools, training organisations, AASN providers, GTOs, and employment services providers.

Join Year13 and YouthSense for YES2020: Together Into The Future as they share their expertise and market-leading data into Australian youth.

This is a huge opportunity for those in the vocational sector to understand how young people make decisions about their future and leverage this for improved student engagement and communications strategies.

Hear from Year13 co-founder William Stubley as he releases their third annual report After The ATAR III. Also speaking will be award-winning former Curtin University CMO Ty Hayes. The event also promises interactive sessions where you can engage from the audience with the youth experts straight from your phone.

These insights will help you future-proof your organisation and position at the forefront of the youth market.

Early Bird special finishes this Friday, so visit the YES2020 website for more info or click here to buy your tickets now.