With national Parliament resuming in Canberra last week there has been an interesting set of events which point to important priorities for vocational education in Australia.

The Prime Minister started by highlighting the good news – and it is – that unemployment has dropped more than forecast earlier in 2020. Then on Wednesday, Philip Lowe, Governor of the Reserve Bank gave the broader context; “the unemployment rate is higher today than it has been for almost two decades and many people can’t get the hours of work they want.”

All this, and we are still unsure what the winding up of JobKeeper and returning JobSeeker to its pre-pandemic level around the end of March will mean for the economic outlook.

All this against a backdrop of low wages growth, as presented by Lowe last week. This is where vocational education comes in. Last week I talked about the tri-partite roots of vocational education in Australia as the vehicle for consensus (and arbitration) to bring Australian workers through industry restructuring following trade liberalisation. 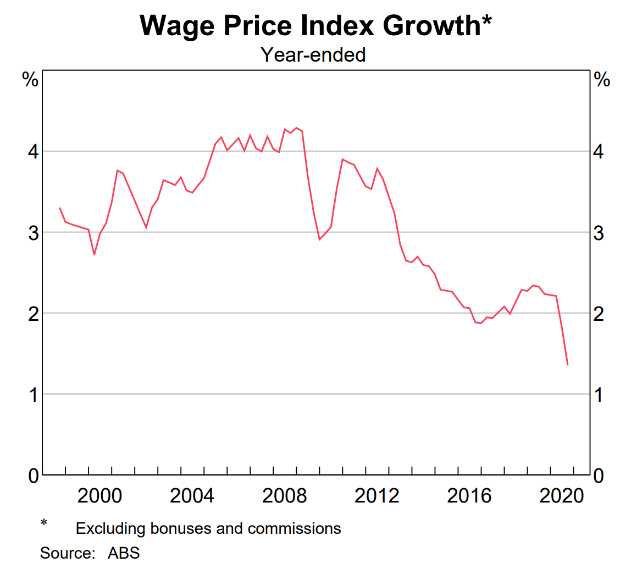 It is hard not to think we are in a similar position now.

After the rebound from the GFC, wages growth started its decline. The graph on wage premiums from tertiary education prepared by the Productivity Commission show the same inflection point but the stories probably differ for higher education and VET. For higher education, which typically serves occupations outside of structured wage setting (modern awards), the increased supply of graduates entering the labour market as a result of demand-driven funding has probably brought wages down. 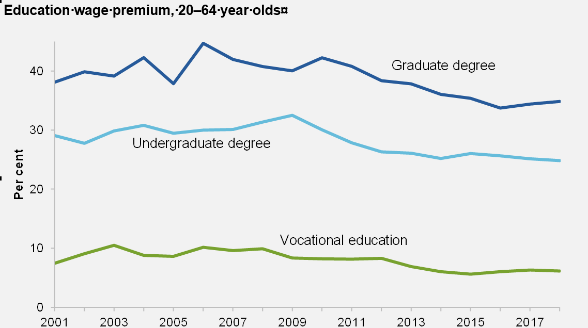 VET has played its own liberalisation story –  opening limited public funding to more suppliers for more courses in the belief of choice and the human capital philosophy that investing in skills improves the outlook for graduates. The graph shows the outlook is hardly anything to crow about.

What is more distressing is the 20-percentage point gap in the wage premium from an undergraduate degree compared to VET – unfathomable and inexcusable really.  After all, output from levels 1 to 6 of the AQF represent VET and it’s only one more level to the undergraduate degree at level 7.

To me this points to structural issues and they are not minor, nor inconsequential. Just on 50 per cent of the working age population are at or below the VET line!

Many of the reviews of VET proffer that the decline in activity is due to poor training, not enough competition, insufficient industry voice or loss of trust. Perhaps the cold simple fact is that the return from VET is small, and prospective students know it, or, in reality, people are too busy chasing a living.

The Productivity Commission’s mission is to call for efficient allocation of public resources and it has done the same with its review of the VET system. While it may be a legitimate concern on public administration grounds it comes in third or fourth order compared to wages growth and job security, particularly at this point in Australia’s history.

It is all too easy, and many would say wise, to keep the two issues – wages and vocational education – apart. Nevertheless, where the policy narrative links VET to jobs, enforced through qualifications, it is reasonable to ask whether VET has been successful on the wages outcomes for graduates.

The good news is VET qualification reform is one of the elements governments are exploring. Even though it is early days, the productivity and wages outcomes from vocational education programs need to be a design feature. On these grounds alone, the content of qualifications would change substantially.

Leeser’s point is valid. Many Australians don’t want to take up some of the jobs on offer and for others we don’t have enough skilled workers. Perhaps the Joint Committee should be asking what can be done first in Australia before we take the easy skilled migration path. The National Skills Commissioner should offer some interesting divination on this front.

The Victorian Government also released this past week a roadmap for its VET system. My quick reading shows it is focused on economic recovery through jobs and qualifications reform, even self-accreditation. It will be worth a close study.

The last word to spur this on is from Philip Lowe again in a 2018 speech, “flat real wages are diminishing our sense of shared prosperity. The lack of real wage growth is one of the reasons why some in our community question whether they are benefiting from our economic success.”

Let’s show them they are wrong.

Victoria’s TAFEs would maintain distinctive local identities, but share some core services and establish a quality benchmark as the anchor of the state’s VET system, under the reform plan laid out in the ‘Macklin Review’ of VET.

Through FutureSkills Victoria, the government would “support and promote a TAFE network that becomes the quality benchmark for the entire VET system,” the report says.

The Victorian TAFE Association welcomed the release of the report, noting that its findings underline the importance that TAFE plays in the VET sector in the state.

There has been a rush by employers to access the 50 per cent wage subsidy for employing new apprentices and trainees, with almost three-quarters of the available places filled after four months.

The Minister for Employment, Skills, Small and Family Business, Senator Cash said that 73,760 of the available 100,000 places for new apprentices and trainees have been filled under the Boosting Apprenticeship Commencements (BAC) wage subsidy.

“There are still nine months of the program to run. What we’ve seen to date is over 29,000 employers – and I’m very pleased to say this includes 21,000 small businesses – register over 73,760 new trainees or apprentices for the program,” Senator Cash said.

The program commenced in October and provides a 50 per cent wage subsidy up to $7,000 per quarter. It is due to run until the end of September, but at the current rate, the available places will be filled well before then.

New head of VET at CDU

Dr Shehabuddeen has an international track record in transforming industry engagement across both higher education and VET.

He completed his PhD and MPhil at the University of Cambridge and worked at the same institution as an Industrial Research Fellow. He has served as a Visiting Professor and ministerial advisor to the Government of Malaysia.

“VET is the bedrock of any industrialised society and key to employment outcomes and social mobility,” Dr Shehabuddeen said.

“We are living in a digitally immersive world, in the midst of the 4th Industrial Revolution where the emergence of VET-level digital or ‘Blue Tech’ skills will be vital in preparing students for the workforce,” he said.

Exciting employment opportunity in the Pacific

The Australia Pacific Training Coalition (APTC) is advertising for an Executive Director, responsible for supporting technical, vocational education and training reform in the Pacific region.

Based in Suva, Fiji, the successful applicant will lead a workforce of more than 200 staff who are located at APTC country offices in Fiji, Samoa, Solomon Islands, Vanuatu and Papua New Guinea and in-country representatives in Tonga, Kiribati, Nauru and Tuvalu.

The role is accountable for an annual expenditure budget of approximately $40 million.

See the latest issue of Dispatch, the journal of the World Federation of Colleges & Polytechnics (WFCP) to hear the latest news from around the globe.

WFCP Chair Craig Robertson reflects on the disruption of the past year. There is news of seven new new Affinity Groups that create an international community of practice in specialised areas.

There is also a series of topical webinars – the first later this month on the issue of resilience in the face of the pandemic.

The changing nature of employment, including the growing gig economy, poses risks to the future of apprenticeships, according to a new paper from the European Centre for the Development of Vocational Training (Cedefop) and the OECD.

The paper, ‘The next steps for apprenticeship’ was produced following a joint Cedefop-OECD symposium in Paris in October 2019 and contains a series of articles by international experts.

It says there is “a significant risk that apprenticeship will become, as it has been in some countries in the past, a mechanism solely for securing the labour market integration of lower skilled workers.”

“This concern is amplified for society by worry over the capacity of apprenticeships to be genuinely inclusive, offering a wide range of learners an attractive opportunity to secure an upper secondary or tertiary qualification,” it says.

A chapter by Erica Smith, Professor of Vocational Education and Training at Federation University looks at the role of intermediaries and also at new forms of work including ‘industry 4.0’, globalisation, economic structural adjustment, labour movements, and new forms of employment and self-employment such as the gig economy.

She acknowledges the desire to see the apprenticeship system adapt, but warns against “hasty developments which may later be regretted and difficult to undo.”

Professor Smith poses the question of whether “the gig economy should be legitimised by providing the respectability of apprenticeships”, and looks at new higher level apprenticeships, asking whether a system that has typically belonged in VET and mostly designed for school leavers could adversely impact youth employment.

The strong demand for TAFE courses around the country has been featured in the latest episode of ABC Radio National’s The Money.

Host Richard Aedy interviewed TDA CEO Craig Robertson about the impact of JobTrainer, the influx of mature age workers seeking to upskill, and growing areas of interest in areas such as cybersecurity, nursing and aged care.

Listen to the program

Three specialist Koorie staff members will be employed at every Victorian TAFE, under a $4.2 million program announced by the state government.

The Minister for Training and Skills Gayle Tierney said up to 18 Koorie Liaison Officers and 32 new Koorie Student Support Officers would help to grow Aboriginal student participation at TAFE.