know the feeling that something’s right but there’s a missing piece?

I recall the same feeling in defusing the Y2K Bomb.  For you young ones – if you are younger than 40 – it was the switch from 31 December 1999 to 1 January 2000. Us older generation was worried planes would fall from the sky and computers spin into endless loops because 00 follows 99 in the 2-digit year in computer code. Rest assured we were safe because we all had plans a mile thick replete with strategies and mitigations. (The Y2K coordinator at my work held a midnight barbeque on the roof of the building, ready to rappelle down the side if the lifts seized!).

The experience was the first time we realised our dependence on technology. We muddled through on that occasion but today the risks are far higher.

Those stakes have been described in full by the Digital Transformation Expert Panel in the report released a fortnight ago – The Learning Country – Digital Skills Transformation Strategy.

The recommendations are focused on current businesses and existing workers as businesses are best placed to benefit from digitally enabled transformation and it is existing workers most likely to be impacted but can generate the dividend for their employer and themselves if the upskilling is right.

As with all these things the important point is to look at the areas of failure that justify governments caring. After all, if there’s a 15 per cent productivity uplift available, why wouldn’t business hop on to it.

There is plenty of justification. Firstly, the Government has realised the lost opportunity to Australia if technology is not taken up. The Budget announced several strategies to build a digital economy by 2030 and, ironically, it relies on humans on several fronts.

Firstly, we need to grasp the opportunity. Head in the sand from businesses offers little apart from a mouth full of sand.

Thirdly, we need workers capable of leveraging the new technology and, as the report points, out jobs will be more human-centred where people come together with automation.

Fourthly, if business is more on-line and reliant on adept users, a broad capability is required to engage knowingly on-line.

The ICT Training Package has been renewed but is it an analogue approach to training (enforced by training package policy) in a digital world?

Higher order cognitive skills and capabilities are needed but I’m still searching for qualification reform or the AQF to authorise these into learning.

Governments are reviewing the National Foundation Skills Strategy which will include digital literacy and the extended JobTrainer includes 10,000 places for digital skills courses.

The piece that’s missing from my perspective is a clear answer on what are digital skills and how are they codified for teaching and learning? Globally, there appears to have been little serious effort to describe the best way of collating and teaching digital literacy and skills, especially for the regular worker. Industry can’t do it alone. After all they’ve had to commission this report.

If digital literacy is a foundation skill, then surely it’s just that, a foundation upon which many digital practices can be constructed. Our current training package templates forces foundation skills to be deconstructed to be demonstrated against elements of a task. My reading recovery days in primary school teaching taught me that this is probably the most disempowering of education approaches. I wait with interest to see the new foundation skills strategy.

I’m reminded of comments from the previous chief scientist – Professor Alan Finkel – for good (STEM) education, students need deep discipline knowledge… whatever they’re learning, that knowledge has to be deep. I’m still to see serious attempts by the Australian Industry Skills Committee, which curates knowledge into training packages, for a reasonable explanation of how discipline knowledge is dealt with in VET – even in the most recent ICT package.

I’m not sure either if the answer lies in learning to operate certain software or kit. Ask any programmer who backed C++ or Fortran for their career.

During the past week Microsoft announced it will no longer support Internet Explorer. It will go the way of other world barnstorming technology. Remember Yahoo or Facetime? At its peak, Yahoo was valued at $125 billion (US) and after refusing to buy Google for $3 billion in 2002 because it thought it was overvalued, it has vanished. Myspace was the front runner of social media but it ignored its competitor, Facebook, and sold for $35 million (US) in 2011.

I’m genuinely perplexed about the approach to teaching and learning for digital literacy and skills but I’m confident the Digital Skills Organisation will give it a red hot go.

All up though, let’s hope the Government picks up the recommendations in The Learning Country as that’s a valuable and needed first step. It’s the journey we need to focus on next.

Development of Australia's VET qualifications compares favourably to other approaches around the world, study finds

Australia’s process for developing VET qualifications – often seen as clunky and slow – compares to timeframes in other countries, although as the report states “Information on the length of time required for the qualification development process is not publicly available for most of the countries.”

The study by the NCVER – ‘Vocational qualification development: lessons from overseas’ says, “No comparable international process appears more efficient or effective than Australia’s”.

But it says elements of the process in some countries could be adapted to benefit Australian qualification development.

NCVER says the current qualification development process in Australia is contentious because it can take up to four-and-a-half years for a qualification to be developed, and another one to three years before it is delivered by a registered training organisation (RTO).

It also says Australia is the only country with detailed information available.

NCVER refutes the perception that educators and educational institutions have little involvement in developing vocational qualifications.

“It may well be that the perception of educators’ involvement in qualification development differs from the reality; that is to say, they are more involved than generally believed,” NCVER says.

Alternatively, the fact that education institutions overseas generally develop qualifications for accreditation would suggest they have far closer engagement and ownership of qualifications than in Australia, CEO of TDA, Craig Robertson commented in respect of the finding.

Engaging trades learners in a virtual class: experiences and lessons

The most recent edition of TDA’s webinar series focused on shared experiences and lessons in engaging trade learners in a virtual classroom.  Pitched at TAFE teachers and trainers, about 170 participants logged on for the hour and a half to hear from three excellent presenters:

Husnen discussed how to engage students through virtual learning based on electrotechnology; Shannon explained options for the use of virtual reality for online training; while Ronald reflected on what TAFEs’ response to COVID said about teaching trades online.

The chat box and online Q&A reflected the energetic and enthusiastic engagement of TAFE teachers and trainers on this area of interest and reflected the desire of TAFE staff to continue to learn and gain further skills and knowledge for virtual delivery, including where practical for trades learners.

In case you missed this webinar, or you would like to share it with colleagues, please find the recording here. 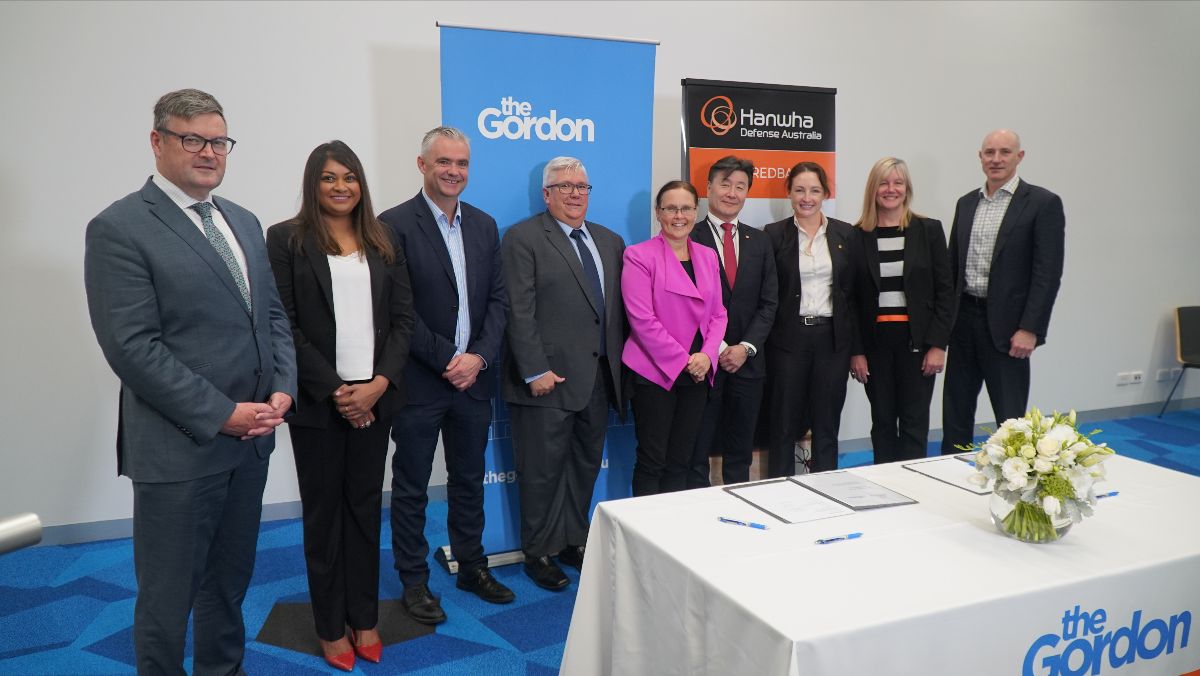 The Gordon Institute of TAFE has signed a Memorandum of Understanding with Hanwha Defense Australia as the two entities partner to deliver Hanwha’s Australian manufacturing workforce.

Hanwha has been selected as the sole tenderer to bid for LAND 8116, a $0.9 billion to $1.3 billion project which will see the Commonwealth acquire self-propelled artillery systems to be manufactured in the Greater Geelong area of Victoria.

In conjunction with Hanwha, The Gordon will undertake a thorough analysis of training needs to determine the precise learning and development requirements to build and sustain a skilled local workforce that can manufacture and maintain various capabilities for the ADF.

The Gordon’s CEO Joe Ormeno said the institute has the capabilities, expertise and experience to support Hanwha in its bid to secure the project.

“And with the support of our Skills and Jobs Centre, we have the means to engage a robust recruitment and training strategy that will ensure a workforce capable of meeting the expected demands,” he said.

The Managing Director of Hanwha Defense Australia Mr Richard Cho said a strategy for employing skilled individuals in a timely manner would be vital for developing an advanced defence manufacturing industry in Geelong.

“Partnering with an iconic local institution such as The Gordon will greatly help Hanwha’s integration into the local community.” Mr Cho said.

TAFE gets a big lift from Victoria's state budget

The key elements include:

After seven years in the education portfolio, Tasmania’s Deputy Premier Jeremy Rockliff has been handed a new portfolio in a reshuffle following the state election.

The longstanding minister will take on responsibility for Health, as well as a new portfolio of Community Services and Development.

The new Minister for Education and Minister for Skills, Training and Workforce Development is Sarah Courtney, pictured, who previously had the health portfolio.

The West Australian government has convened a skills summit to enable industry leaders to offer ideas on boosting the state’s skills and training system.

The summit on June 30 aims to assemble industry representatives from across a number of sectors including resources, defence, construction and healthcare industries.

Premier Mark McGowan and Education and Training Minister Sue Ellery have called the gathering “to hear from some of WA’s business leaders on what more can be done collaboratively, and more immediately, to address existing skills needs across sectors”.

The government also announced further detail on its pilot Construction Accelerated Apprenticeship Program which offers construction workers
without formal qualifications the opportunity to have their existing skills recognised, thus cutting the time required to get an apprenticeship.

WA TAFEs will assess the skills of applicants to confirm suitability for the program.

Two researchers at Box Hill Institute (BHI) have been awarded the inaugural Women in Adult and Vocational Education (WAVE)/Sue Salthouse research grant for research into gender and disability.

The $1000 grant was awarded to Annemaree Gibson and Annie Carney at the AVETRA 21 Virtual Conference in April.

The grant will support Annemaree and Annie with the completion of a paper for publication on a current program that helps build teacher capability to support learners of all abilities.

The awarding of this research grant acknowledges and continues the commitment of TAFEs across Australia to Practice-based Innovation and Applied Research.

Congratulations to Annemaree Gibson and Annie Carney. We look forward to the publication of your applied research.

Vacancy for lecturer at Federation Uni

Federation University has a vacancy for an additional Lecturer (level A/B) in VET teacher-education at its Mt Helen campus in Ballarat, to teach on the Associate Degree of VET.

The term is until the end of July 2022, but is likely to be extended.

Anyone wishing to discuss the vacancy can contact Professor Erica Smith on (03) 5327 9665 or e.smith@federation.edu.au

The State of Apprenticeship during the COVID-19 Pandemic: Reports from Seven Countries
26 May 2021
Virtual event
See the full program and register here