I regretted when I booked a seat in the top tier of the Ponsford Stand at the MCG to watch Collingwood play Hawthorn[1]. Specks and spots. Player and ball. I was pleasantly surprised, however, that the elevated view gave me a new appreciation for the quintessential Australian Rules Football.

In any contested possession of the football the Hawthorn player was always more precise in passing it on – by hand or foot. Under pressure, a Collingwood pass or kick was just off target which put the receiving player under more pressure and more often than not the ball spilled to the opposition. Skill with the ball – overhead, on the hand or the foot – made the difference.

Most apparent from the aerial review are the systems in play. A ground or TV view hides the constant positioning of players to be free to receive the ball and the response of the defensive players. I’m amazed by the analysis of some of the commentators comparing the systems each team puts in place.

Success overall, though depends on the fortitude and attitude of each player. The key ingredient for success these days is off the back of player intent – each working their part in the system and backing each other up.

I hope even football novices see the corollary to the nature of work.

In a recent speech I gave to a Minerals Council function I reflected on the impact of automation and digitalization on the nature and expectations of work. While it may not be apparent in our working situation, it is clear in mining as large scale automation allows for remote operations, for example. Work hierarchies and long held roles are changing – the flattening of work structures. Reliance on hierarchy for quality and process control is no longer a luxury.

Unfortunately, VET’s focus on teaching processes and assessing behaviours risks process workers without the capacity to adapt (unless they attend further training for the new process) and behaviours without the thinking. Assumptions in qualifications that worker quality is covered by close supervision doesn’t stack up with modern workplaces.

At this point I turn to the Australian Skills Classification (ASC) that has been released by the National Skills Commission as a beta product built from analysis of job openings data and descriptions of elements of occupations from the United States and other sources. It’s power, apart from Big Data, is it drills down to the skills in operation across the labour market. It’s not captured by the sometimes-imprecise definition of an occupation, but describes and codifies the skills at play across jobs no matter what occupation it is being used in. Call it a Skills First approach.

Regardless of the acknowledged shortfalls in the data, the ASC points to a new approach to defining skills, and it matters for individuals and the economy.

An individual armed with skills – which can be transported across various jobs occupations – is forearmed for success. Workers able to be deployed to new roles with new expectations bring productivity to businesses.

Workers with the transferable skills and understanding of their use in different contexts (such as systems in football) are a key feature in an advanced and sophisticated economy.

Football systems were put under pressure some years back by flooding – crowding opposition players into the forward line to stifle ball movement. The systems adapted but the same, and better, skills were required.

There’s concern that the ASC is missing elements but that will be resolved over time as can the nature of transferability. Many did not want the mobile phone when it was a brick and look where we are now.

The ASC is exciting as it allows for the VET sector to start a person on a proficiency journey aimed at improvement and excellence, rather than the offer of competent for an occupation.

Simplifying and codifying the skills and capabilities that matter may be the easy part. Developing the education intervention is exciting and more promising than relying upon elaborate and outmoded occupation breakdown structures as the basis of skilling. How satisfying for teacher and student to start someone on a journey of proficiency with a wider array of opportunity before them.

There are broader implications at stake. Just this past week the Productivity Commission released its insights on productivity and wages growth. The last decade has been the slowest since the 1960s and that workers are about $11,500 worse off than they would be if pre-2012 growth had persisted.

A new approach to skilling, offered by the ASC, reflective of skills required across the economy and not captured by occupation or special interests is true transformation that can bring deeper skills to employers more efficiently. This may be the source of productivity and innovation which has a higher chance of wages growth than our current strategies.

I will gladly return to the lofty levels of Ponsford Stand to view a game. I dare say, skills reform would benefit if analysed from a similar higher perspective.

[1] For international readers the Melbourne Cricket Ground is the largest sporting arena in Australia, seating over 100,000.

The NSW TAFE system is set to receive $19 million to improve digital technology at campuses as part of a $250 million boost for TAFE in tomorrow’s state budget.

In a pre-budget announcement on Saturday Treasurer Dominic Perrottet said the $19 million would be invested in information and communication technology and other assets at campuses across the state to help deal with “booming demand” brought on by the pandemic .

In addition, nearly $6 million will be provided for 16 undercover training facilities for trades across the state including at Broken Hill, Kingscliff, Moruya and Western Sydney.

“This investment in TAFE will help equip people with the skills they will need now and into the future,” Mr Perrottet said.

“The recently released NSW Productivity Commission White Paper highlighted the need to ensure our workforce has the skills needed to adapt to the challenges and opportunities that will emerge in a post-pandemic world.”

There will also be $11.4 million to continue or complete construction of Connected Learning Centres at Bateman’s Bay, Cobar, Jindabyne, Hay, Tomaree, Nambucca Heads and Byron Bay.

Mr Perrottet said TAFE NSW would benefit from a total investment of more than $2 billion in the 2021-2022 state budget to bolster skills training and deliver a strong workforce.

More than $2.1 billion in VET FEE-HELP student debts have now been wiped out, according to the latest quarterly report of the VET Student Loan Ombudsman.

The report shows that at the end of March, the ombudsman had recommended the re-credit of VET FEE-HELP debts for 10,400 complaints, worth $162.5 million.

This was in addition to more than $2 billion in debts that were directly re-credited in collaboration with the Department of Education, Skills and Employment.

There are still 1,485 VET FEE-HELP complaints waiting to be addressed. There were 679 complaints finalised during the quarter, 60% fewer than in the previous quarter, something the ombudsman puts down to the increasing complexity of the remaining caseload.

Even though the VFH scheme closed in 2016 and was replaced by VET Student Loans, there were a total of 634 new complaints in the March quarter relating to 90 providers (see table below). 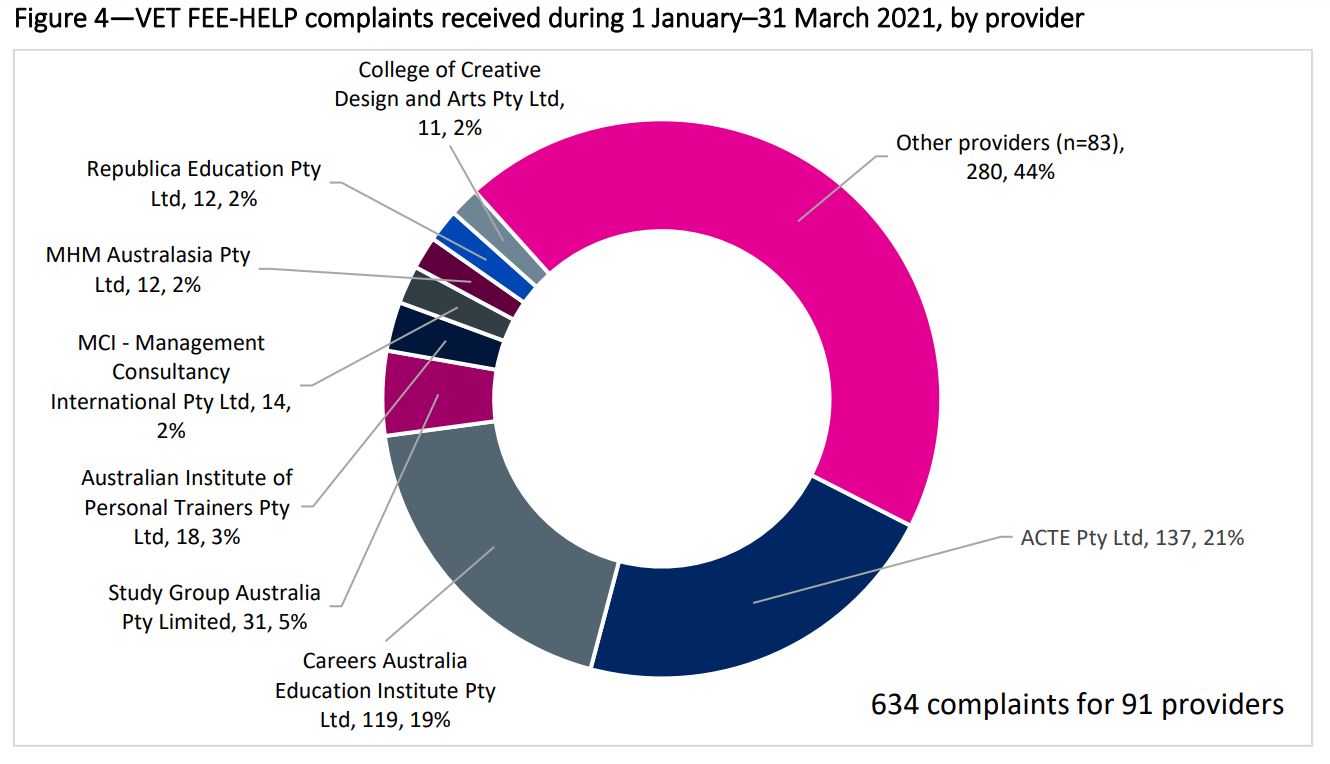 The federal government is inviting feedback on plans for further reform of its program of free English language tuition provided through the Adult Migrant English Program (AMEP).

The latest reforms to the AMEP are contained in a discussion paper, and revolve around shifting the focus from the current “input-based” model to one that targets learning outcomes.

“In input-based models, the onus is on clients to adapt to the program, which can result in disengagement, low retention and poorer outcomes, especially for those who need more flexible tuition times or require a more gradual pace of learning,” the discussion paper says.

In contrast, an outcomes-based model would see service providers paid in accordance with the progress of their students.

“This change is anticipated to lead to greater flexibility for students to learn outside of regular tuition hours, and to provide greater scope for providers to choose the style and frequency of delivery to suit different student cohorts,” the paper says.

The paper also discusses the planned shift to a national curriculum and the question of support for AMEP teachers as part of the transition.

The Victorian government has started the process of recruiting members for the new Victorian Skills Authority (VSA) Advisory Board, which will oversee skills and training in the state.

The Minister for Training and Skills Gayle Tierney is seeking applications from suitably qualified individuals for the chair and members of the board.

The VSA was recently announced by the government as part of its response to the Macklin Review of VET.

The selection criteria notes that applicants need to present a compelling case for their individual expertise and capacity to contribute, rather than representing an organisation or group.

It will see the TAFE deliver a Certificate III in Agricultural Mechanical Technology which will provide consistency of skills across AGCO dealerships.

The bespoke program reflects the fact that an “off-the-shelf” training course may not cater to the needs of the industry.

Bendigo TAFE Chief Executive Sally Curtain said the partnership is an exciting beginning, and shows the value of the TAFE’s longevity in the community.

The partnership will see students in regional Victoria accessing the latest in agricultural machinery. 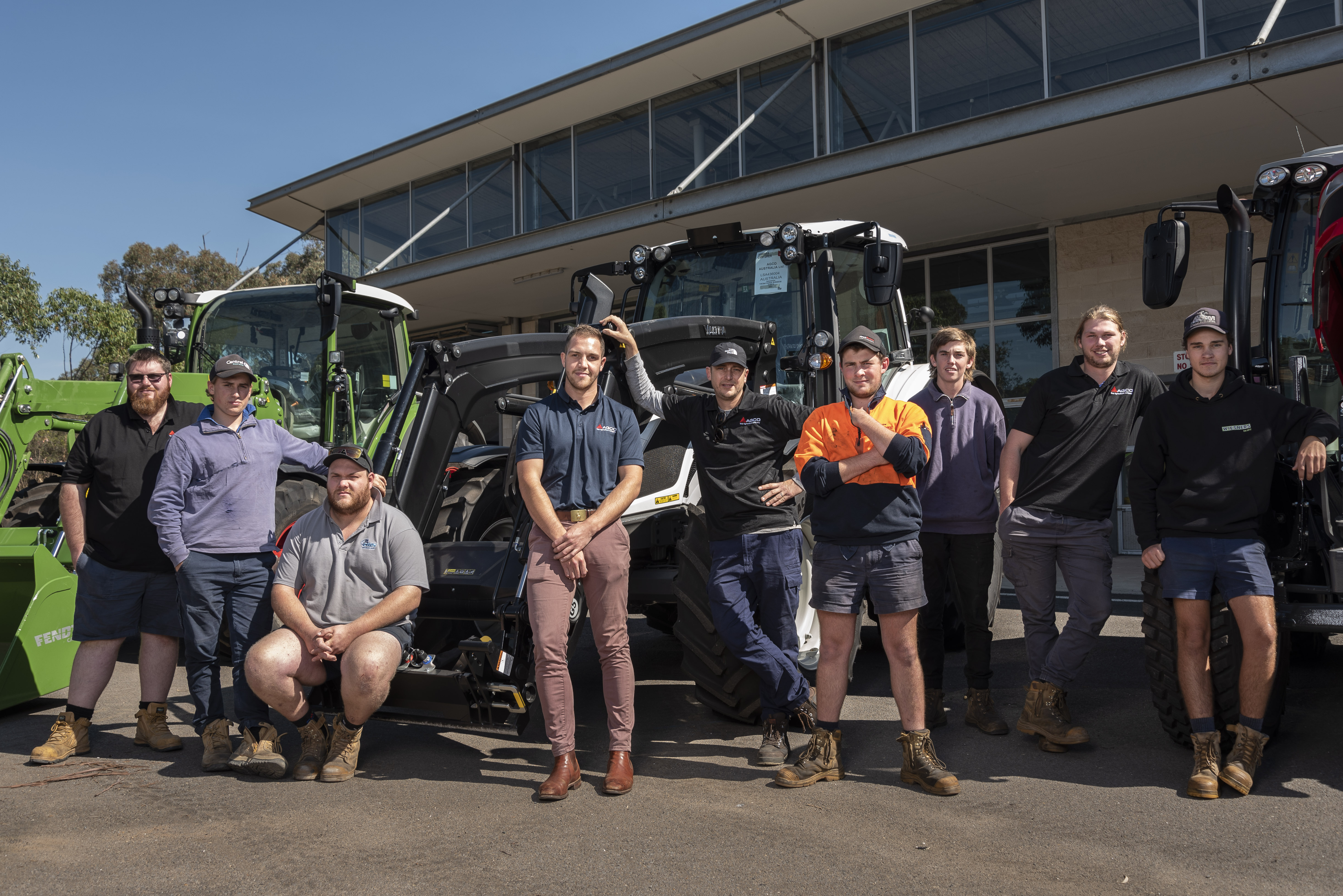 CQUniversity has been buoyed by the Queensland state budget which included funding of $8 million for the first stage of its Central Queensland TAFE Centre of Excellence in Rockhampton.

CQU Vice-Chancellor Nick Klomp, said this would mean building work on the $50 million centre could now get started.

“As the only university in Queensland to offer all levels of tertiary study from Certificate I to PhD, it makes sense for our VET training to be consolidated and co-located on our North Rockhampton campus,” he said.

“Not only is it essential to reduce the cost of operating two campuses in the one city, but it also provides an opportunity to upgrade outdate TAFE infrastructure and deliver a contemporary, state-of-the-art facility.”

The second stage of the project will need $42 million in funding and will see all of CQU’s TAFE and higher education facilities co-located on the Rockhampton North campus.

'History of VET' alive and well

The authors of a new study on the history of VET admit that they didn’t expect much of a response when they issued a call for papers.

“Historical approaches are not a major focus of contemporary VET research,” they concede.

They were surprised to receive an “impressive 30 potential contributions” covering the history of ideas about vocational education, concepts such as competences and skills, and studies on social inequality.

The latest Journal of Vocational Education & Training includes the article ‘Towards an international comparative history of vocational education and training’ and a series of contributions from around the globe.

Noting that “VET in a strict sense has been in existence since the beginning of humankind”, it traverses a series of social and cultural developments, including classical economist Adam Smith’s plea that apprenticeships be abolished, and the evolution of contemporary VET systems in Europe and Australia.

The Australian Industry and Skills Committee (AISC) is calling for nominations for two positions on the Education Industry Reference Committee.

The two positions will represent Registered Training Organisations (RTOs) and can be public, private, enterprise, community or school-based.

The Education IRC has responsibility for the TAE Training and Education Training Package. It is anticipated that the Education IRC will submit a Case for Change to the AISC to review the training package in August.