Self-determination with a heart – comment by CEO Craig Robertson

Self-determination with a heart – comment by CEO Craig Robertson

Just because an Aboriginal family is in straitened times, do not assume they do not harbour aspirations. This was the best advice I received from a senior public servant whom I respect immensely. He knew, as he had held a very senior role in the Northern Territory Government.

This week we mark NAIDOC and for our part we think through the role TAFEs play in the advancement of Aboriginal and Torres Strait Islanders.

We’ve had some weird policy in Indigenous training and employment policy in recent times. I well remember the requirement placed on the unemployed in remote communities. Each had to undertake formal VET training and access work at various points in order to retain income support payments. What work? What industry? Mutual obligation may work in the mainstream but you could not imagine the quizzical looks in the community when faced with this silly white fella business!

This push followed the lofty COAG targets and aspirations of 2008 to 2013. The era of joint action between the Commonwealth and states and territories shone the light on the issues and set targets for action. Still, it was what governments were going to do to Aboriginal and Torres Strait Islanders. Nevertheless, the Closing the Gap report that arose and the annual address of the Prime Minister to Parliament has kept our country focused.

The last report presented on 14 February 2019 shows gaps remain between Aboriginal and Torres Strait Islanders and the rest of Australia, alarmingly so. In good news, though, efforts are on track for two targets: that 95% of Indigenous four-year-old’s are enrolled in early childhood; and halving the gap in Year 12 attainment or equivalent by 2020.

Vocational education and training plays its part by offering Year 12 equivalent courses as part of the Year 12 Attainment target. Each state and territory also committed to targets for participation and completions for Indigenous Australians by 2016 through the National Partnership on VET Reform. The agreement’s mid-term review showed that the targets were met by the end of 2014. My search of the Skilling Australians Fund, the replacement agreement between governments, fails to find mention of Indigenous priorities.

In the most encouraging news for Closing the Gap, our Indigenous leaders have led a refresh of the targets. The spirit is self-determination built on a strengths-based approach. VET has its role to play in several of the targets, which are being led by the Commonwealth:

I’m interested in the self-determination element. There is no doubt that work is a key plank to success but are we sure the way we conceive of linear pathways to work through our concept of VET is the best? Specifically, are competencies aligned solely to the tasks of occupations that operate in our capital cities and rigidly enforced by providers in fear of unfavourable findings from the auditor, the best solution? This smacks of white fella business to me. The Joyce recommendations for Aboriginal and Torres Strait Islanders risks this approach, but makes useful recommendations, nevertheless.

As NAIDOC asks, and we reflect on progress of Aboriginal and Torres Strait Islanders, I sense there’s been progression in our policy approach. Modern efforts in Indigenous policy, including in VET, have been based on a welfare philosophy: ‘they can’t look after themselves, so we’ll need to do it for them’. The recent move to targets, in this case through Closing the Gap has us feeling good about what we want to achieve on behalf of Indigenous Australians (only having to beat ourselves when things don’t go to plan). Now there’s self-determination: let’s work in partnership. This probably has a greater chance of success because we are all working on shared commitments to meet aspirations.

One of the dangers in public policy is we don’t ditch our past practices. We just pile new approaches on top of the old and wonder why there is confusion and little progress. In this instance, I’m not sure that our Western neo-liberal social policy toolkit, best characterised by principal-agency theory (that has turned into control from the centre), is suited, but that’s up to the parties to determine.

While you’re in a reflecting mood, where do you place the overall VET system on this progression spectrum?  I’d love to hear your thoughts.

Read the rest of this newsletter to see just some of our members’ work in facilitating progress of Aboriginal and Torres Strait Islanders.

Also, take the time to watch the story of Cassie Puruntatameri in this video. Cassie spoke at the Congress of the World Federation of Colleges and Polytechnics last October about her journey from the Northern Territory to a job in the Department of Education and Training in Victoria, thanks to the AIG traineeship program. The journey was possible because of the belief of her supervisor and Cassie’s pluckiness. It will lift your spirits – I guarantee.

Self-determination with heart, is what I call it.

TDA is delighted to celebrate NAIDOC Week and its 2019 theme: ‘Voice. Treaty. Truth. Let’s work together.’

The program creates a more accessible pathway for Aboriginal people who wish to become police officers.

Trainees gain exposure to a range of unique policing activities to get a true taste of what it means to be part of the WA Police Force. They receive important job related training and attend formal class-based training provided at NMTAFE’s Joondalup campus.

There were 31 trainees enrolled across 2018 and 2019, and four recruits have begun their careers, after successfully graduating as police officers.

Aboriginal recruit Mark Tye was earning good money working FIFO but reached a point in his life where he wanted a change and a more stable job that would give him the opportunity to help people.

“I’d been out of school for a while so the Aboriginal Cadet Program helped me with basic literacy and numeracy skills for the Academy’s entrance exam,” said Mark.

“We also had good mentors and were well supported throughout our time at the Academy.” 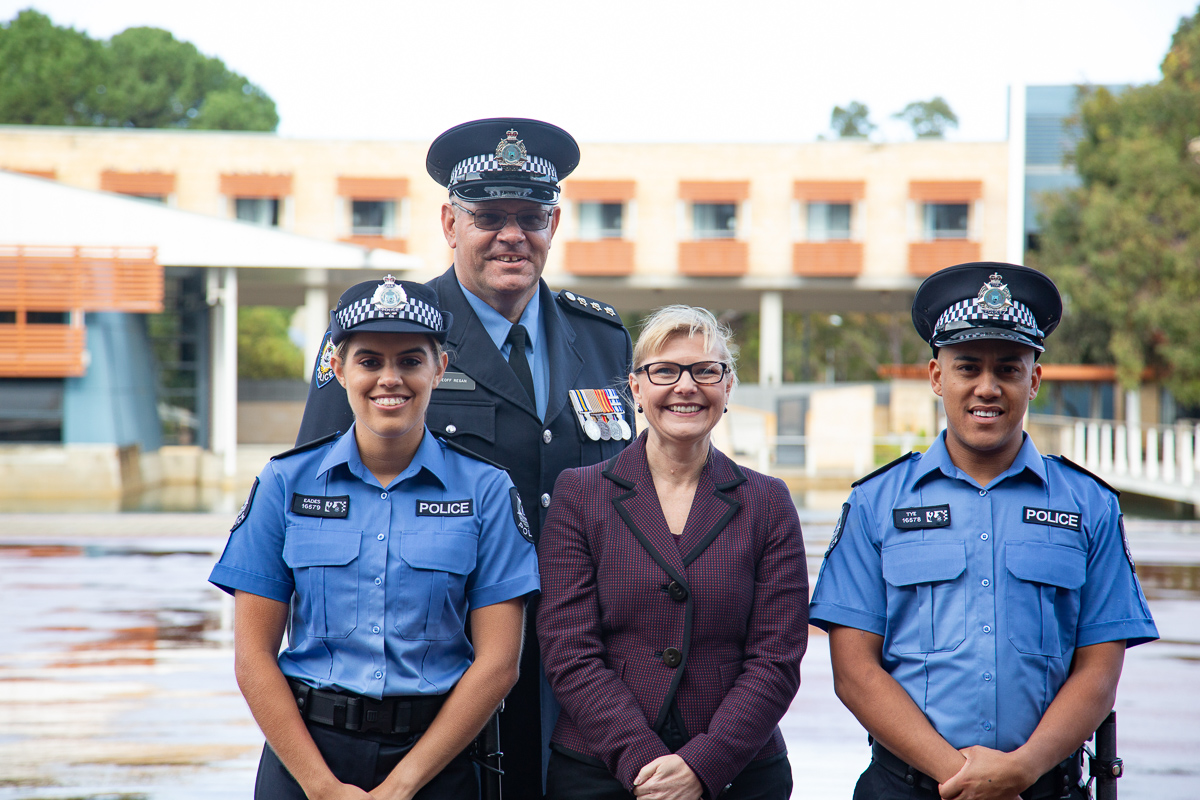 Charles Darwin University (CDU) has launched a report that highlights outstanding instances of vocational teaching and training in Indigenous communities.

They also demonstrate the complexity of delivering VET in these communities and the challenges regional and remote Indigenous students face when participating in VET.

The report, Ready for Work – Stories of Innovative Vocational Education and Training for Regional and Remote Indigenous Students at Charles Darwin University, was commissioned by CDU and written by TDA alumni, Melinda Waters. 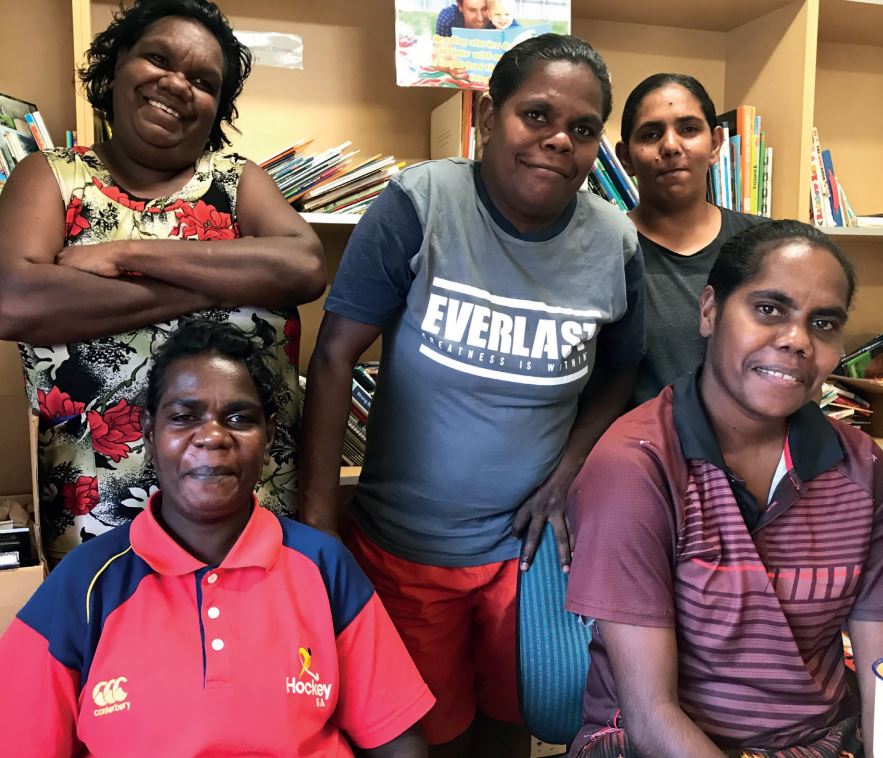 One of the case studies features CDU students (pictured) working at the Guluman Family Centre in Ngukurr. The 2018 class was made up of eight women aged between 18 and 36, most with young children and with year 10 to 12 levels of education.

They were part of more than 50 early childhood education and care students studying at the Katherine campus from communities in Timber Creek, Mataranka, Kalkaringi, Lajamanu, Wugularr and Barunga as well as Ngukurr and Katherine.

The 2018 Tasmanian Training Award winner Lydia Scotney is a proud Aboriginal woman forging a successful career in the health industry. 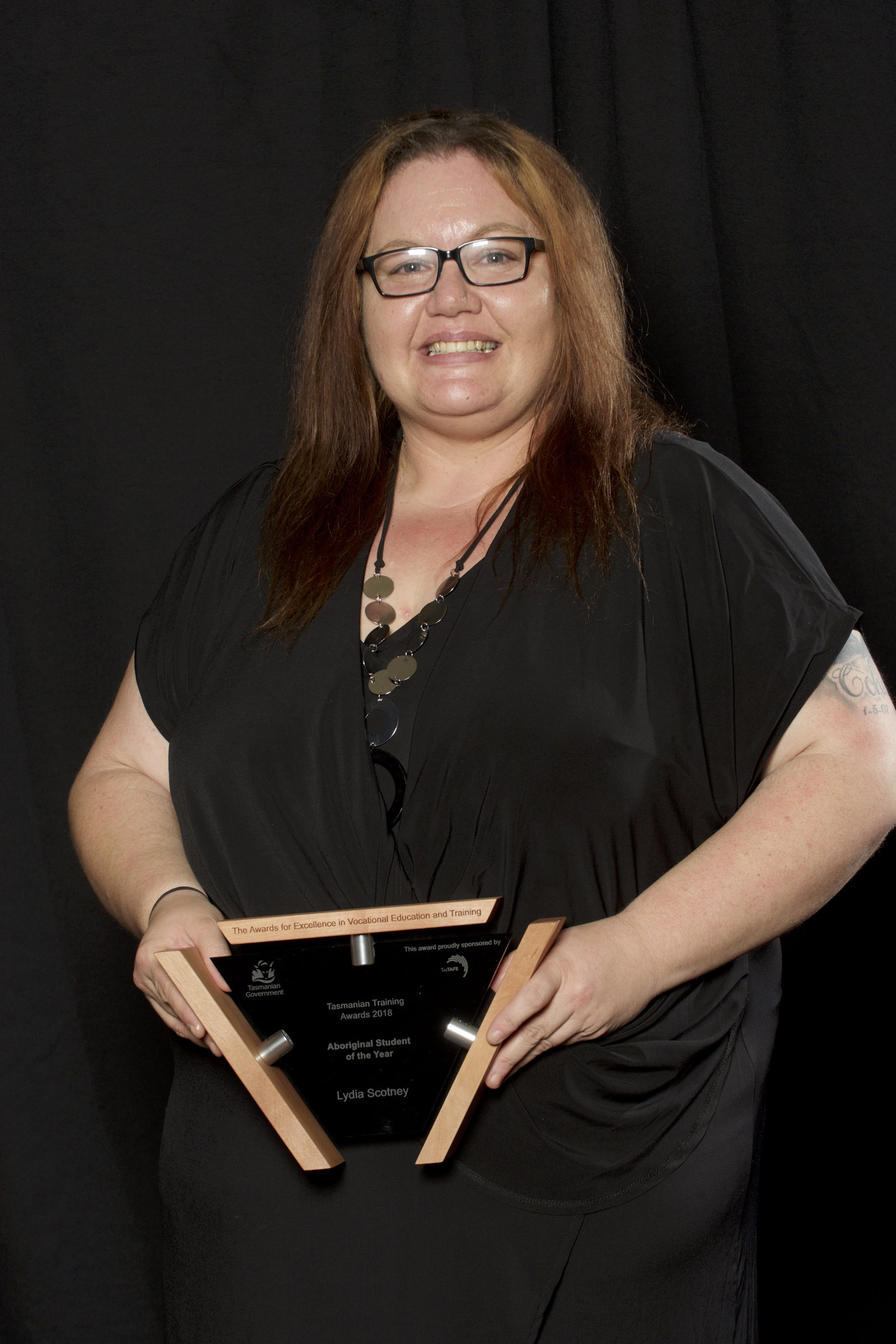 wanted to work with a variety of different people across a broad spectrum of the industry.

Lydia is currently working in the aged care sector, employed by OneCare as an enrolled nurse.

She continues to develop and consolidate her skills through TasTAFE courses for her Nursing Continuing Professional Development.

“Without services such as Aboriginal Training Programs at TasTAFE I believe that access to vocational education and training would be diminished because the cultural understanding  and support that they provide, to not only Aboriginal students, but to TasTAFE as a whole, helps break down the barriers,” Lydia said.

“I sometimes think that TasTAFE staff don’t realise just how much they have done for me as well as many other students.”

Woorabinda Pastoral Company trainees are enhancing their skills – and their community – thanks to a Certificate I in Conservation and Land Management at CQUniversity.

The group, which is undertaking the course as part of the Queensland Government’s Skilling Queenslanders for Work program, travel to the Rockhampton campus once a week to work with Horticulture teacher Kay Pearson. 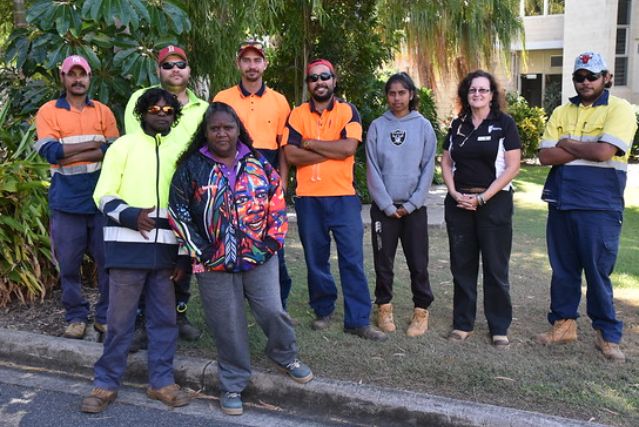 They learn how to recognise native plants using Western scientific knowledge, use and store chemicals safely, test soils and are trained in workplace health and safety practices, with the skills and knowledge being applied to a restoration project in Woorabinda.

The group has been gradually regenerating a local wetland. They plan on constructing a walkway over it and installing tables, chairs and commemorative plaques. The natural area holds cultural significance for the community as one of the original camp sites.

“We’ve been working on the Taroom-Woorabinda Memorial Walkway,” one of the participants, Shawn Holz said.

“It’s where fifty-two tribes used to live here around the lagoon.”

Teacher Kay Pearson said although the students were in the early stages of the course, they were enthusiastic. She travels out to Woorabinda once a month as part of the course to record progress of the project.

“I am very much going to enjoy the challenge of teaching them and their practical project is fantastic. The end result will certainly benefit their community,” Kay said

The exhibition supported Aboriginal and Torres Strait Islander students who are currently studying across creative portfolios and also showcased work from past students who maintain strong relationships with the Koolark team. 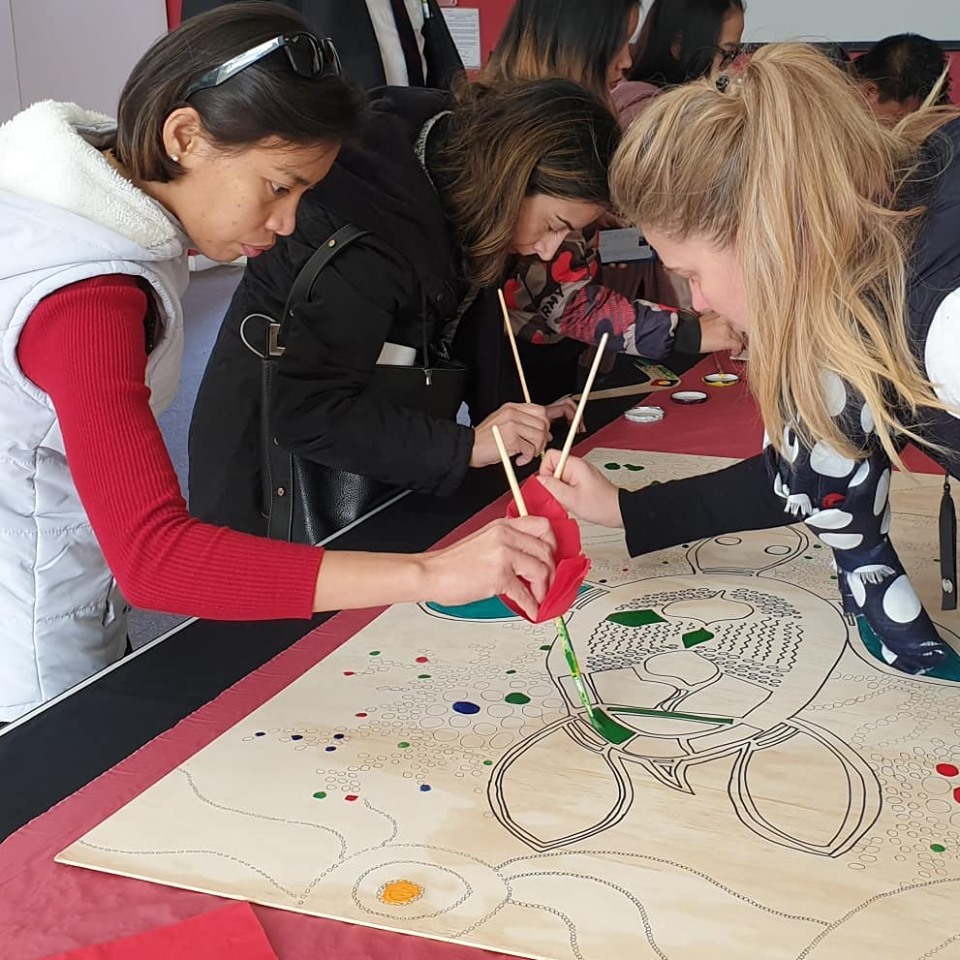 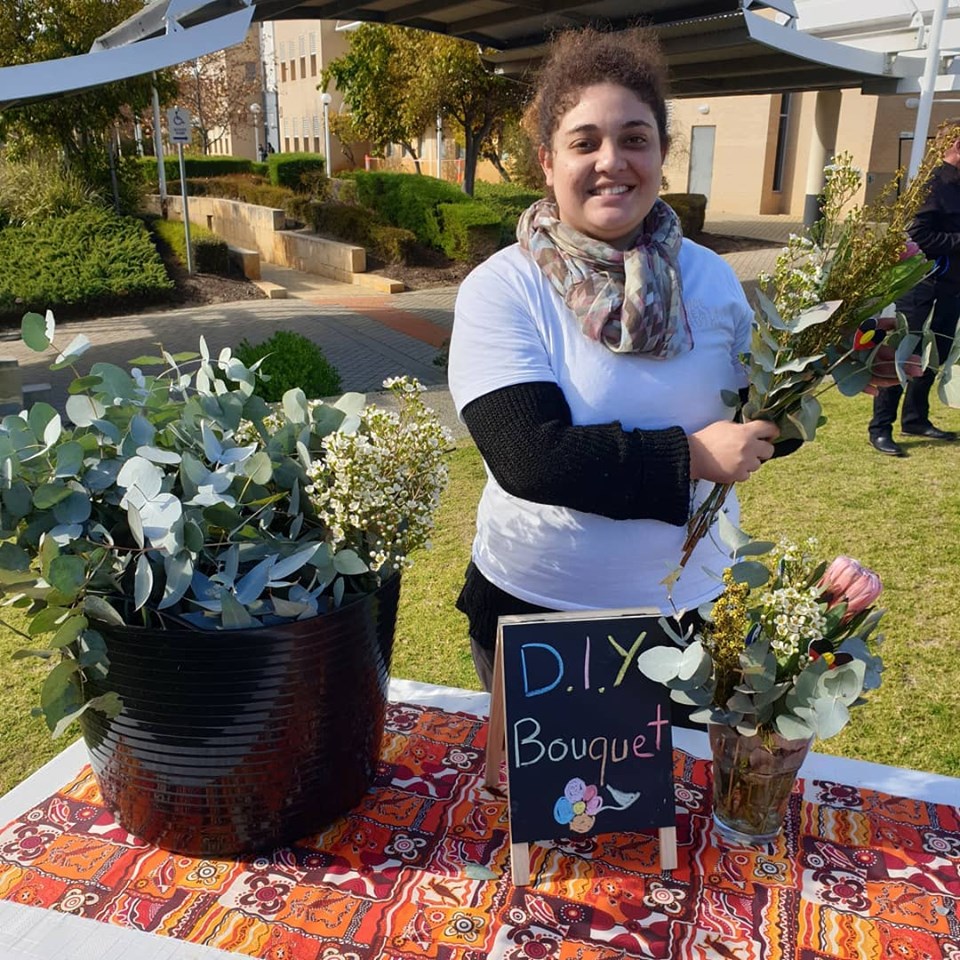 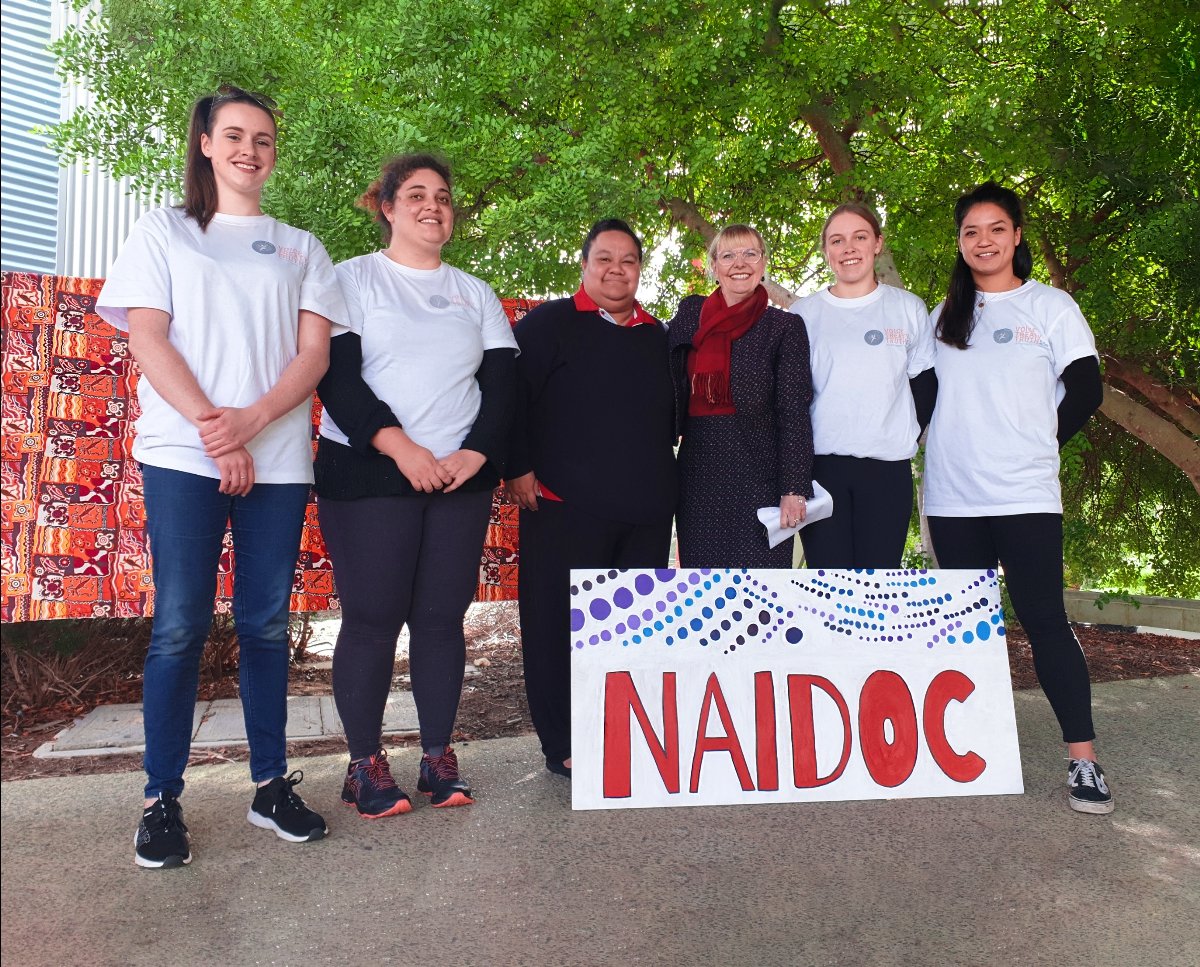 TAFE institutes are reminded of an important online survey they have been requested to undertake as part of an official evaluation of the VET Student Loans program.

The Department of Education and Training (DET) commissioned KPMG to undertake this evaluation. Feedback from TAFEs will help inform this analysis. The primary audience for the evaluation is the Australian Government, to inform potential changes to the program in the future.

DET has identified key representatives from each RTO and an initial email with an individualised link to the survey has been sent.

The survey will be open  for a further week and can be completed in approximately 10-15 minutes. Responses will be de-identified and kept confidential in all project reporting.

If you have any difficulty finding the original email from KPMG or have any questions, please contact Zain Sandila at KPMG: zsandila@kpmg.com.au