When it comes to the good news in tomorrow’s national Budget we’ll be thanking iron ore once again for helping reduce our national government debt. This financial year the federal coffers are expected to be $20 billion richer than expected and debt will be forecast to come down quicker thanks to China’s ongoing demand for steel and faltering supply from competitor nations.

This miracle for the nation points the way for the resuscitation of our other miracle industry – international education. This week submissions close for responses to the proposed 10-year Australian Strategy for International Education 2021-2030.

International education is a classic trade struggle just like iron ore, except it’s for a service, there are lots of competitor nations and consumers can easily switch their preferences. International students can swap countries at little cost.

There are huge ancillary benefits attracting students to Australia. A world-leading public health response to COVID, superior health system, public safety, sun, sea and snow across the seasons and a relaxed lifestyle. Generous work conditions and high relative wages also help students sustain themselves while they are here.

A key question is whether these can stand-up while our borders remain closed for good public health reasons and we wait for immunity. Because much of the rest of the world is also supplying international education, even more than the Western economies which have been the traditional suppliers of international education.

It is within this competitive milieu that we need to contemplate the 10-year strategy. Apart from the ancillary and wage benefits, surely the product – the qualification – is key to continued success.

Iron ore production has not stood still. It has been transformed through automation, so much so that Australian mining is regarded as world leading. The same needs to be true for our qualifications, especially for the VET sector.

When opposition leader John Hewson proposed under Fightback to reduce trade tariffs, I recall him saying some manufacturers welcomed the chance to compete on the world stage while others still wanted protection. Business and leadership courses hardly buttress us against competitor countries.

There are integrity concerns as well. How can it be that the same VET qualification can be delivered in a short space of time to domestic students but is delivered full-time and over an extended period for international students that even differences in learning attributes cannot explain away? And how does a competency behaviourist approach which too often falls short on underpinning logic and knowledge serve international students?

Despite the challenges looking ahead, this week we feature on our website the positive stories international education delivers.

Closed borders and the 10 years gives us time to look afresh at the product. In a decade iron ore is likely to still fuel infrastructure across the globe, but even that is finite. If China, just as one example, is powering its economy through steel and infrastructure then it’s likely doing the same with soft infrastructure, such as its own education and training. Even informal on-line learning is filling the void. We need to think about the education edge from Australia.

There is time, but there must be major reform. Quality providers such as TAFEs need to be trusted to represent the best of the Australian education approach and know-how and be allowed to create products and services to keep ahead of the pack.

The reputation of Australia’s VET system is finite but there is still time to think anew about the competitive role it can play in international education.

Tomorrow’s federal Budget is expected to see an expansion of the JobTrainer program for another 12 months, with free or low-cost courses for tens of thousands of people.

ABC TV News reported last night that the government will extend the program, which was due to end in September, with a focus on areas such as aged care, IT and childcare.

The $1 billion JobTrainer program commenced last October and aims to fund around 300,000 training places for people aged 17-24 or those out of work.

The training places are being rolled out in cooperation with the states and territories, so any extension of the program will need to be negotiated with premiers and chief ministers.

The ABC report included a wide-ranging interview with Treasurer Josh Frydenberg. The report also speculated about a possible extension of the Boosting Apprenticeship Commencements (BAC) program which provides a 50 per cent wage subsidy to employers of apprentices and trainees for the first 12 months.

The first instalment of the program commenced last October and was capped at 100,000 places and expected to run for 12 months, but was fully taken up in just five months.

The government has since extended BAC to September this year but with no cap on the number of eligible apprentices and trainees.

See the ABC report: JobTrainer program to be extended under $1b budget plan to reskill workforce, slash unemployment

The federal government has announced greater work flexibility for international students by removing caps on hours for those working in tourism and hospitality.

The Minister for Immigration, Citizenship, Migrant Services and Multicultural Affairs Alex Hawke said on Saturday that the 40 hour fortnightly limit previously applied during study periods will be removed.

In addition, temporary visa holders will be able to access the 408 COVID-19 Pandemic Event Visa for a period of 12 months if they work in tourism and hospitality.

This adds tourism and hospitality to the critical sectors of agriculture, food processing, health care, aged care, disability care and child care for eligibility for this visa subclass.

“I am continuing to take feedback and advice from a range of sectors and will make further announcements on temporary visa flexibility measures and priority skills in the near future,” Mr Hawke said.

TDA has welcomed the strong focus on TAFE in an announcement by the Victorian government on skills funding in the lead up to the state budget.

The VSA will coordinate teaching and training across the VET sector and prepare the Victorian Skills Plan to identify skills priorities.

TDA CEO Craig Robertson said the VSA model is an exciting development that brings together skills deepening with industry development strategies for Victoria which is a central design feature in the Macklin report.

A new Office of TAFE Coordination and Delivery will be established in the Department of Education to enhance collaboration across the TAFE network. 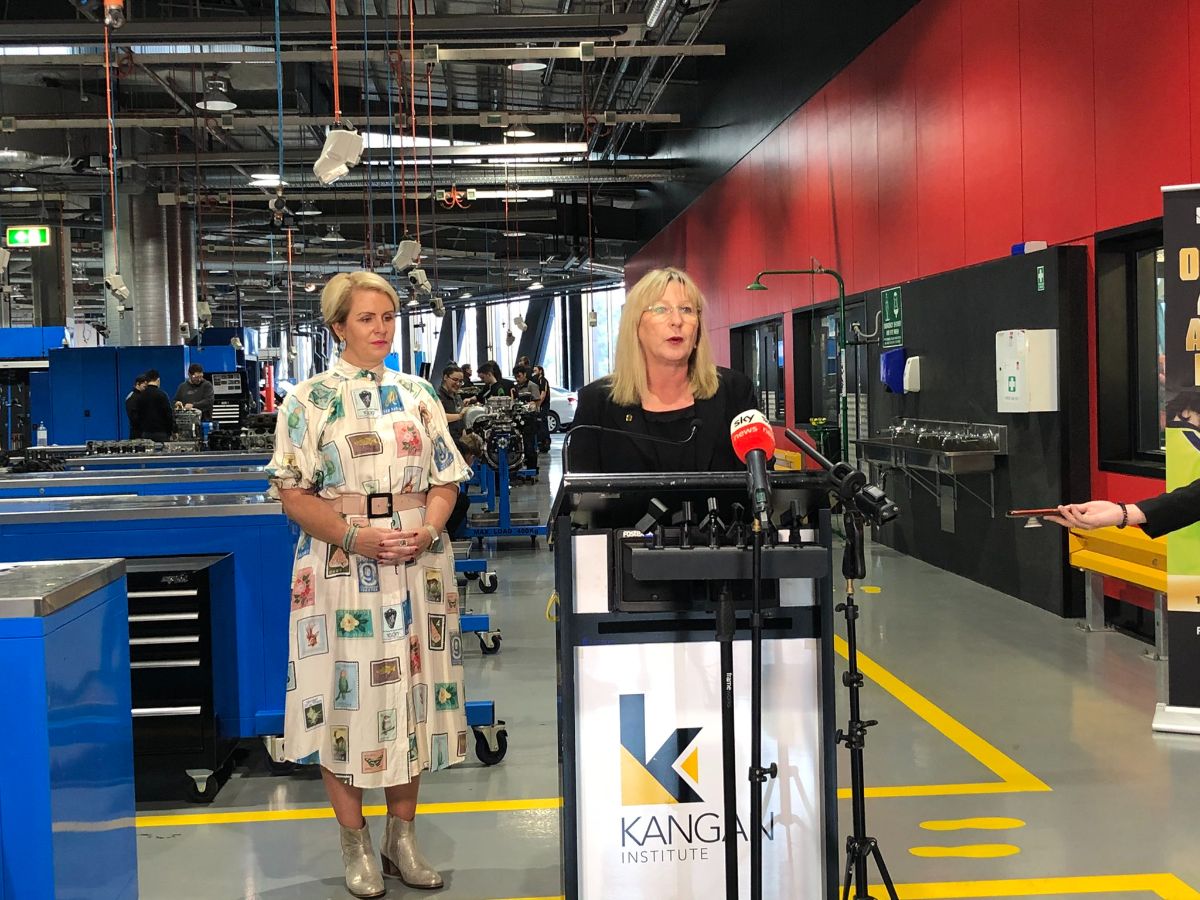 Experts to discuss how COVID has impacted apprenticeships

The impact of COVID-19 on apprenticeships in seven countries including Australia will be the subject of a free virtual event later this month.

The Urban Institute and the International Network for Innovative Apprenticeship (INAP) will host the ninth annual forum on apprenticeships on Wednesday 26 May at 10 pm AEST.

Among the international speakers is Professor Erica Smith of Federation University who will discuss the impact of COVID and recent trends in Australian apprenticeships.

The state-of-the-art Hospitality and Tourism Training Centre will be used to deliver training in commercial cookery, tourism, event management, as well as hair and beauty.

The centre will be a one-stop shop for simulated training at the Mandurah campus, with construction to include two training kitchens, a production kitchen and a restaurant, as well as a new hair salon and dedicated training spaces for beauty therapy and massage.

The project is part of the WA Recovery Plan, with $167.4 million invested in essential infrastructure upgrades across the state’s five TAFE colleges.

Tenders are now open and construction is expected to begin in July.

The extraordinary benefits of free community college education in the United States have been recounted in an evocative column in The Washington Post.

Associate Opinions Editor Jen Balderama writes openly about the emotional pain she was suffering as a result of a thwarted career as a ballet dancer, before having her life turned around on enrolling in the community college system – a close equivalent to TAFE in Australia.

At 18 years of age, she says the experience saved her life, sitting alongside “students of diverse origin and motive, young, old, ambitious, ambivalent, razor-focused, confused. Few of us had much money. All of us were searching.”

It was, she said, “a safe, stable haven, just as it is for many students who might otherwise endlessly drift.”

“People who had terrible high-school grades and are trying to get back on track. Who can’t afford tuition at four-year institutions. Who need the counseling, career guidance and additional support services the colleges offer to homeless and other at-risk students, to veterans, to foster youth.”

See ‘Community college saved my life. Thank you, Joe Biden, for trying to make it free.’ in The Washington Post.

(Also, take a look at the reader response, with more than 800 comments!)

The Australian Industry and Skills Committee has issued updated information on the delivery of first aid training in light of latest developments with COVID-19.

The AISC’s Emergency Response Sub-Committee has provided the new information for RTOs following the previous advice on 15 April.

RTOs delivering cardiopulmonary resuscitation within the First Aid units must ensure a risk assessment is completed before delivery and comply with State and Territory Health requirements and any local restrictions.

In local areas where community transmission of COVID-19 has been reported, or where an area has been declared a hot spot, RTOs are able to make “reasonable adjustment” during CPR assessment.

Two openings for vocational managers in the Pacific

Applications close this Thursday (13 May) for two Vocational Training Managers (VTM) located in Fiji and Samoa with the Australia Pacific Training Coalition (APTC).

The VTMs will manage the delivery of Australian qualifications and skill sets in each country, ensuring high quality delivery and regulatory compliance.

The State of Apprenticeship during the COVID-19 Pandemic: Reports from Seven Countries
26 May 2021
Virtual event
See the full program and register here