Last week, the Jobs and Skills Australia Bill was the first legislation before the 47th Parliament. This highlights the importance the Albanese Government is placing on how we better align the demands of the emerging labour market with “current, emerging and future skills and training needs and priorities.”

One of the key messages that TAFE Directors Australia and its members make to Jobs and Skills Australia is when a future skill need is identified, TAFEs must be able to respond quickly. We must also be able to customise training products with a local solution.

States and Territories are best placed to know what levers they need to pull to deliver outcomes for their economies. TAFEs are State and Territory owned. Therefore, TAFEs are part of the local solutions for delivering the skills and training needs for emerging and future skills.

TAFEs, regardless of their organisational construct, are local. They work with local employers, and they develop local intelligence about what employers need. They look for solutions for the employer who has a future skill need now. That local intelligence and responsiveness must be enabled.

Our current national training system has not prioritised future skills nor local solutions. It has not fostered speed to market. Current demand for skills is created by retrospective reviews. That has been the dominant mechanism for determining training investment. That will change with Jobs and Skills Australia as the qualitative intelligence gathered through partnerships delivers new priorities.

TDA and its members welcome the establishment of Jobs and Skills Australia. We see this as a vital body to support where training investment must occur. We look forward to being part of the local solutions that are needed to meet “the current, emerging and future skills and training needs and priorities.”

The Albanese government’s new agency, Jobs and Skills Australia (JSA), will commence promptly under an interim director before decisions are made about its permanent structure and functions.

Introducing the legislation for JSA, the Minister for Skills and Training Brendan O’Connor said the independent body will work closely with state and territory governments, industry, employers, trade unions and training providers.

JSA will play an active role in workforce planning, including undertaking capacity studies for new and emerging industries, effectively replacing the National Skills Commission which will be wound up.

“JSA will build on the work started by the National Skills Commission, but with a much broader remit to address issues in the skills and training sector, while forging closer partnerships with key stakeholders,” Mr O’Connor said.

The government will appoint an interim director to get the agency up and running and plans to engage in wider consultation, including as part of the Jobs and Skills Summit in September, to determine its functions, structure and governance.

“Establishing an interim Jobs and Skills Australia Director will enable its critical work to commence quickly, while extensive consultation on the ongoing functions and structure of JSA occurs,” Mr O’Connor said.

In a statement, the National Skills Commission said’ “We will continue to provide updates on the implementation and consultation period of Jobs and Skills Australia and look forward to working with you and your networks to ensure we deliver the best advice to inform Australia’s skills system.”

The Minister for Skills and Training Brendan O’Connor has shed light on Prime Minister Albanese’s personal commitment to revitalise TAFE and make it the centrepiece of an ambitious skills agenda.

“TAFE has been under-resourced, has been unrecognised and, in many cases, has been neglected by the previous government,” Mr O’Connor told parliament last week as he introduced legislation to create Jobs and Skills Australia.

“I just remind people of this – the first visit in Victoria made by Prime Minister Albanese after the election was to a TAFE college. That says everything about the priorities of the Prime Minister and this government about addressing these skill shortages in this country, and we need to do a lot more.

“The OECD says we have the second-highest labour shortage in the developed world, so this is a job that needs to be tackled immediately,” he said.

For anyone who would like to present at the TDA Convention 2022, the deadline for submissions has been extended until 9am on Monday 8 August.

This is an opportunity for TDA member staff and key stakeholders of TAFE including community, university, industry and government partners to share their stories and experiences of courage, change and challenge. Please click here for more information and to download the presentation guidelines.

Don’t miss out on an opportunity to collectively shape the future of TAFE and the tertiary education sector in Australia – submit your presentation now!

Registrations
Delegates at the TDA Convention 2022 will be informed and inspired by courageous stories and innovative practices. Presentations will highlight the power of collaboration with colleagues, community and industry. The TDA Convention will bring together different perspectives including from students, staff, employers, industry, community and government.

For further information on registration packages and inclusions, and to register for the event, please click here.

TDA looks forward to welcoming its members, partners and supporters to Adelaide in November 2022 to be part of the conversation on Courage, Change and Challenge: The Future of TAFE.

Townsville’s bid to become a renewable hydrogen powerhouse has been strengthened with the signing of a Memorandum of Understanding (MoU) between TAFE Queensland and Ark Energy Corporation.

The partnership will see TAFE Queensland deliver training for Ark Energy’s workforce and its affiliated companies, including Sun Metals and Townsville Logistics.

The training will focus on the safe production, handling and use of hydrogen across various applications in the energy transition and in particular in ultra-heavy transport to reduce CO2 emissions.

Ark Energy is one of the first movers in hydrogen industry, and the training is part of a broader objective that aims for Queensland to reach 50% renewable energy by 2030. 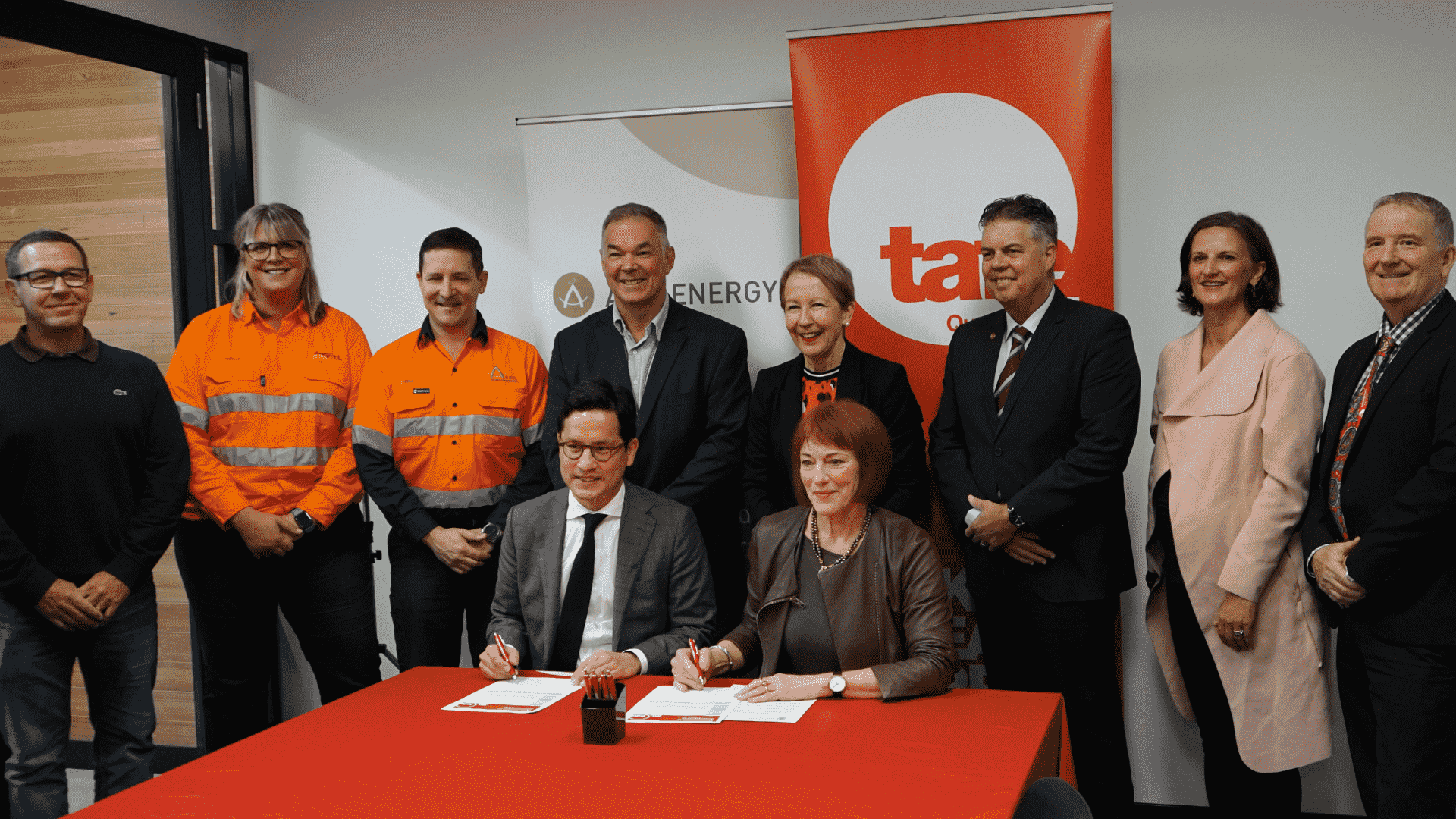 The final chapter in the decade-long VET FEE-HELP saga is approaching, as students who were affected by unscrupulous training providers have less than six months to seek redress.

The Commonwealth VET Ombudsman’s latest report shows a 39% fall in complaints in the six months to March, in line with the gradual decline since the start of the redress measures in 2019.

The Ombudsman finalised 595 complaints in the six months, a 12.5% decrease compared to the 680 complaints finalised in the same period last year.

The student redress measures will end on December 31, giving anyone affected less than six months to lodge a complaint with the Ombudsman’s office.

The Ombudsman says the current caseload includes a high proportion of complaints (39%) about providers who are still operating, which means they are more complex and take longer to finalise.

Don’t miss the next TAFETalks on the topic: General capabilities (employability skills) – current developments, their importance for industry, and future possibilities.

The Australasian Vocational Education and Training Research Association (AVETRA) is calling for proposals from people who wish to run an OctoberVET event in 2022.

OctoberVET is a season of presentations, discussions and workshops coordinated by AVETRA. The goal is to showcase, disseminate and debate vocational, adult and technical education research.

For more information and to register your OctoberVET event, see here.

Commonwealth, state and territory education ministers will meet in Canberra next week with a focus on tackling an acute teacher shortage.

The first half of the meeting on August 12 will be a Teacher Workforce Roundtable which will include principals, teachers and education experts, with ideas generated being fed into the Jobs and Skills Summit in September.

The Minister for Education Jason Clare said there is an urgent need to fix the teacher shortage right around the country.

“Not enough young people are becoming teachers when they leave school and lots of teachers are leaving the profession burnt out,” Mr Clare said.

An issues paper will be published shortly to form the basis of the discussion.