On Saturday 5 February in the Australian Financial Review both the Prime Minister, Scott Morrison and the Leader of the Opposition, Anthony Albanese mentioned the importance of skills development. Mr Albanese singled out skills and training in his list of priorities (‘Race for a return to normal’) and Mr Morrison stated, ‘the skills and training needs of the workforce was at the top of his economic agenda’ (‘Growth to roar past pre-virus forecasts’).

TAFEs are responding to these priorities of both the Government and the Opposition now! Key to that response is the development of micro-credentials.

It is not possible to have a conversation with TDA members without micro-credentials being mentioned. For this newsletter, we’ll focus on three of our TDA members: TAFE NSW, TAFE Queensland and TAFE SA.

Like their TAFE colleagues on the Eastern seaboard, TAFE SA has worked alongside industry to develop bite size courses that are designed specifically to meet emerging trends.

Micro-credentials are rapidly becoming one of the solutions for speed to market to meet industry needs. Sometimes TAFEs have developed micro-credentials because current training packages have not caught up with industry demand.

Hear more about TAFE Queensland’s and TAFE NSW’s micro-credentials next week, on Wednesday 16 February, in our next TAFETalks. This topic is so important we have extended the time from one hour to one and half hours – be part of the conversation and register below.

The National Skills Commission (NSC) has finalised data collection for the first-ever national survey of registered training organisations (RTOs) about the cost of delivering VET qualifications.

Data was provided by 81 RTOs – a mix of TAFEs, private and community providers – that participated in a survey which began in November 2020 and was completed last December.

The NSC says that only RTOs that met a defined quality benchmark based on their student outcomes and regulatory history were included.

The NSC consulted with the states and territories, TDA and other stakeholders on the survey and its efficient pricing methodology.

The information provided included both qualification-specific costs and other costs such as central and capital costs.

RTOs were also asked to provide information about specific groups of students and any costs related to them.

Draft prices for 50 high volume qualifications, and updates and estimates for additional qualifications were provided to the states and territories during 2021.

The NSC is currently seeking feedback from state and territory governments on the findings.

Any questions about the NSC’s efficient pricing work can be sent to the NSC at EfficientPricing@SkillsCommission.gov.au.

The federal government’s JobTrainer program has reached a milestone of more than 300,000 enrolments.

The $2 billion scheme sees the Commonwealth partner with states and territories to fund free or low fee training for job seekers and school leavers in skills need areas.

The program has been funded to support a total of 463,000 enrolments.

Almost a third of all employers are expecting to increase the amount of training they provide to staff over the next 12 months, according to new research by the National Centre for Vocational Education Research (NCVER).

The report, ‘Upskilling and reskilling: the impact of the COVID-19 pandemic on employers and their training choices’ shows how Australian employers have been affected by the pandemic and their current and future training requirements.

Developing digital skills is a key training need highlighted by the research. The increase in social restrictions, online shopping and more staff working from home have forced businesses to digitise their operations, with around a third adopting new technology.

Other key training areas identified were on how to operate safely in the COVID-19 environment, health and safety, and infection control.

It shows that firms are looking for training to support the planned expansion of their businesses, to upskill current employees, and to adapt to changes in the workplace brought by COVID-19.

NCVER says that the priorities for the VET sector will be on training that enables employers to operate in a COVID-19 safe way, supports adoption and use of new digital technologies, and allows the optimum delivery of blended training (online and face-to-face).

VET-in-schools to be scrutinised by ASQA

The quality of VET-in-schools will be the focus of a six-month program by the Australian Skills Quality Authority (ASQA) to address non-compliance and identify areas for improvement.

The action follows the release by ASQA of the VET delivered to secondary school students scoping study last October.

ASQA will undertake a monitoring program in three phases from February to July. It will focus on specific training products with the potential for greatest risk.

ASQA will invite a select group of training providers to share information on VET-in-schools delivery.

There will also be a stocktake of current education and guidance materials. 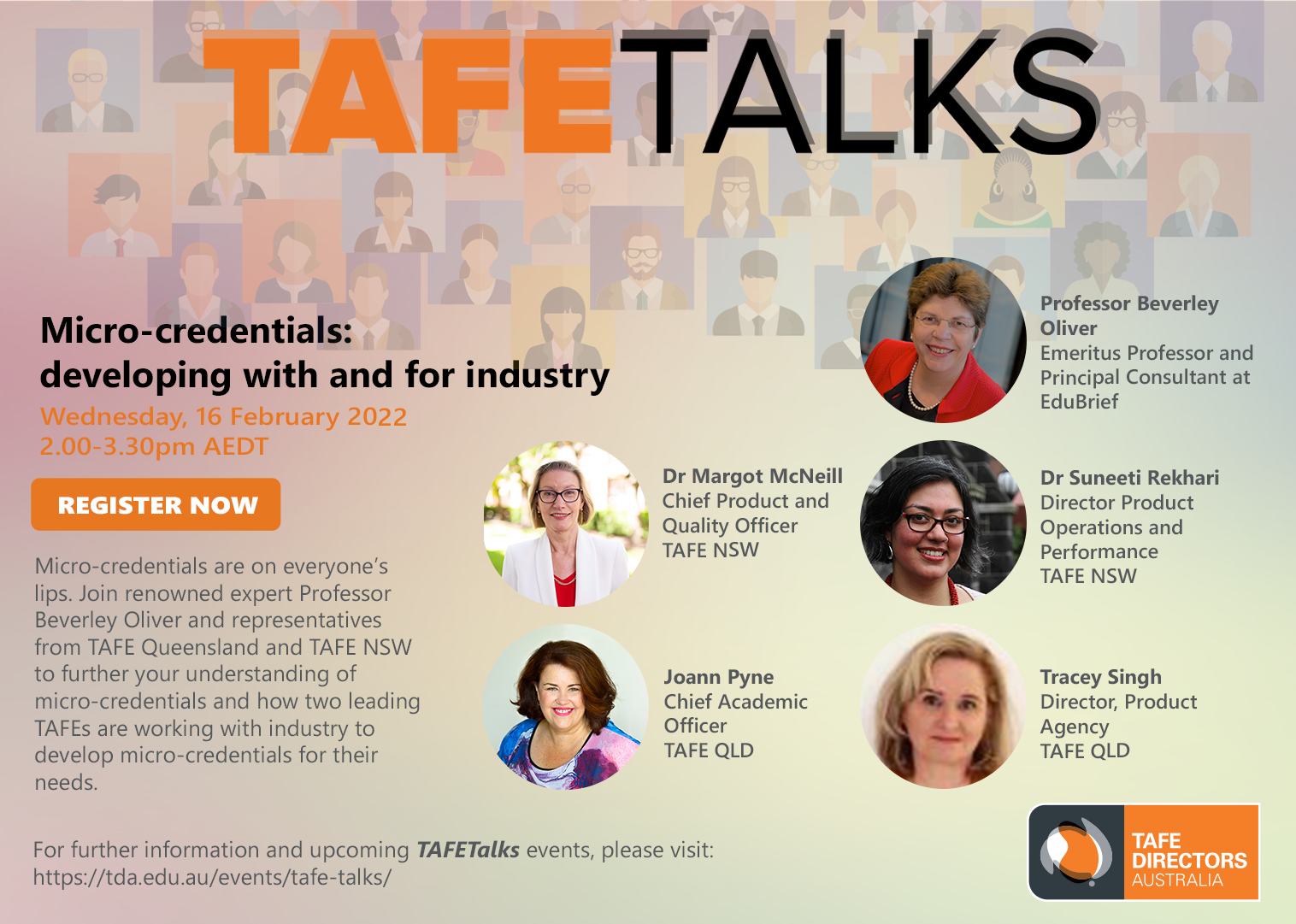 Registration for these events is free! If you cannot attend the event live, please register and we will send you the link to the recording.

TAFETalks: Micro-credentials: developing with and for industry

Description: Micro-credentials are on everyone’s lips. Join renowned expert Beverley Oliver and representatives from TAFE Queensland and TAFE NSW to further your understanding of micro-credentials and how two leading TAFEs are working with industry to develop micro-credentials for their needs.
Register now as places are filling up fast!

AND for your diary…

TAFETalks: The future of international education in Australia: what opportunities for TAFEs?

Description: Please join Janelle Chapman for a conversation on the future of international education in Australia and opportunities for TAFEs. Janelle is the Executive Director at the Australia Pacific Training Coalition, VET Expert member on the Council for International Education and President of the International Education Association of Australia. Janelle will be joined by representatives from the Department of Education, Skills and Employment (DESE), Austrade and the TAFE sector.

Registration:  To register for this event, please click here

Businesses that are interested in recruiting and retaining women returning to work after a career break are being invited to participate in the federal government’s Career Revive program.

The Department of Education, Skills and Employment is seeking interest from medium and large businesses interested in taking part and receiving assistance from consultants KPMG.

KPMG will work with businesses to review the physical workplace, processes, policies and culture, and develop a tailored plan. Up to 30 businesses will be selected to commence the program, starting in July.

Submissions are invited for the VET Journal Article of the Year, named in honour of Professor Berwyn Clayton.

Berwyn was a longstanding and distinguished VET researcher but also, over many years, the joint editor of the International Journal of Training Research (ITJR).

The aim of the award is to recognise excellent scholarship in VET research, and to help to promote VET research in general and the work of AVETRA in supporting this.

The award will be made at the AVETRA conference on April 28-29 for papers published the previous year. The winner is awarded a certificate and a plaque.

Further details are in this flyer or here.

ILO survey to gauge impact of COVID on work

The International Labour Organization (ILO) has launched a rapid survey on the impacts of COVID-19 on work and aspirations, and is inviting responses.

The ILO says the survey will help to expand its knowledge on the effects of the COVID-19 pandemic on education, employment and aspirations in countries across all regions.

ASQA set to test its model of training provider 'self'-assurance'

The Australian Skills Quality Authority (ASQA) has started a process of consultation with training providers on a model of self-assurance.

The model will support providers to monitor, evaluate and improve their own performance against national standards.

ASQA says the first round of consultations will see the development of a draft model for self-assurance based on insights from a range of provider types and delivery contexts.

The process has seen training providers participating in a series of focus groups and interviews.

The next round, to take place in April and May, will include focus groups, interviews and a survey, designed to test and refine the model.

Providers can register their interest in participating in the next round of consultation.

TAFETalks: The future of international education in Australia: what opportunities for TAFEs?
16 March 2022
Register