There’s been encouraging news for vocational education this past fortnight or so. On separate occasions the Prime Minister and Minister for Skills, Senator Michaelia Cash have said:

“We believe that learning through a vocational education is just as valuable as a university degree, so we want to transform the way we deliver skills, support employers and fund training.”

Word for word – a unity ticket. A good one.

It’s unusual in political discourse but in this case, I suspect it’s by design.

Both sides of politics have similar aspirations for the sector. In February 2018 in announcing a review of post-school education if Labor were elected, Tanya Plibersek said: “Labor wants prospective students to see TAFE and uni as equally attractive study options.”

I suspect both sides of politics are reflecting the growing sentiment in the community. Whenever I mention this issue with friends and acquaintances, they are quick to say we have the balance wrong between university and TAFEs. Before universities withdraw their support for a strong TAFE, let me add, the centrality of education and training in the economic fabric of a country and its chances globally, warrants new investment in TAFE, not transfer from universities.

I’m focused on the phrase “just as valuable”. Value holds different meanings for each of us. Just because I value my tweed jacket doesn’t mean my wife does, nor that I place the same value as she would on yet another pair of shoes!

In VET the term is loaded. The sector is structured, the rhetoric is straightforward and it’s shouted loud and clear – vocational education and training is about getting a job, or a better one!

Then, what is the data telling us about the chance of success of that message. The chart below shows trends in VET students by age group. It seems young people are not responding to the VET message. 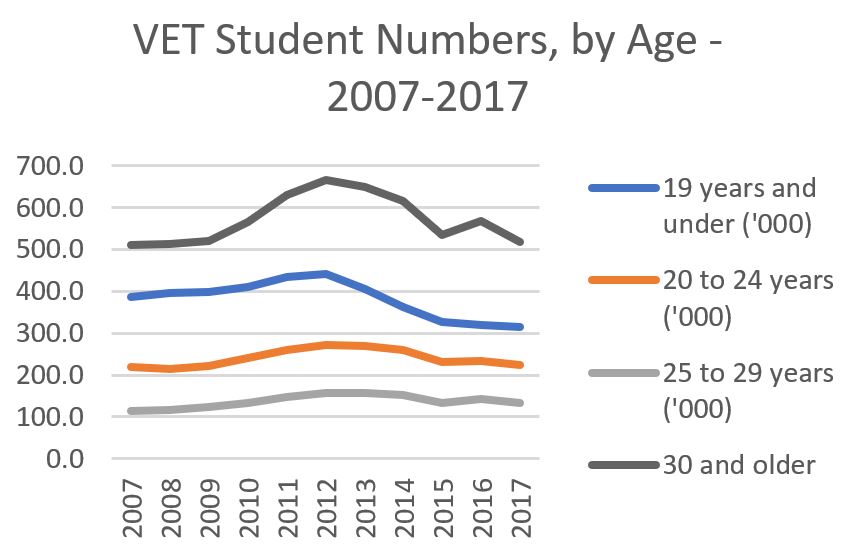 Do job outcomes for those who choose the VET option stack up? Last November KPMG released research by NATSEM on the wage and earnings return from VET and higher education compared to completing Year 12[1]. VET does not fare well as the chart for males shows. For females the wage return is better from completing Year 12 than VET. 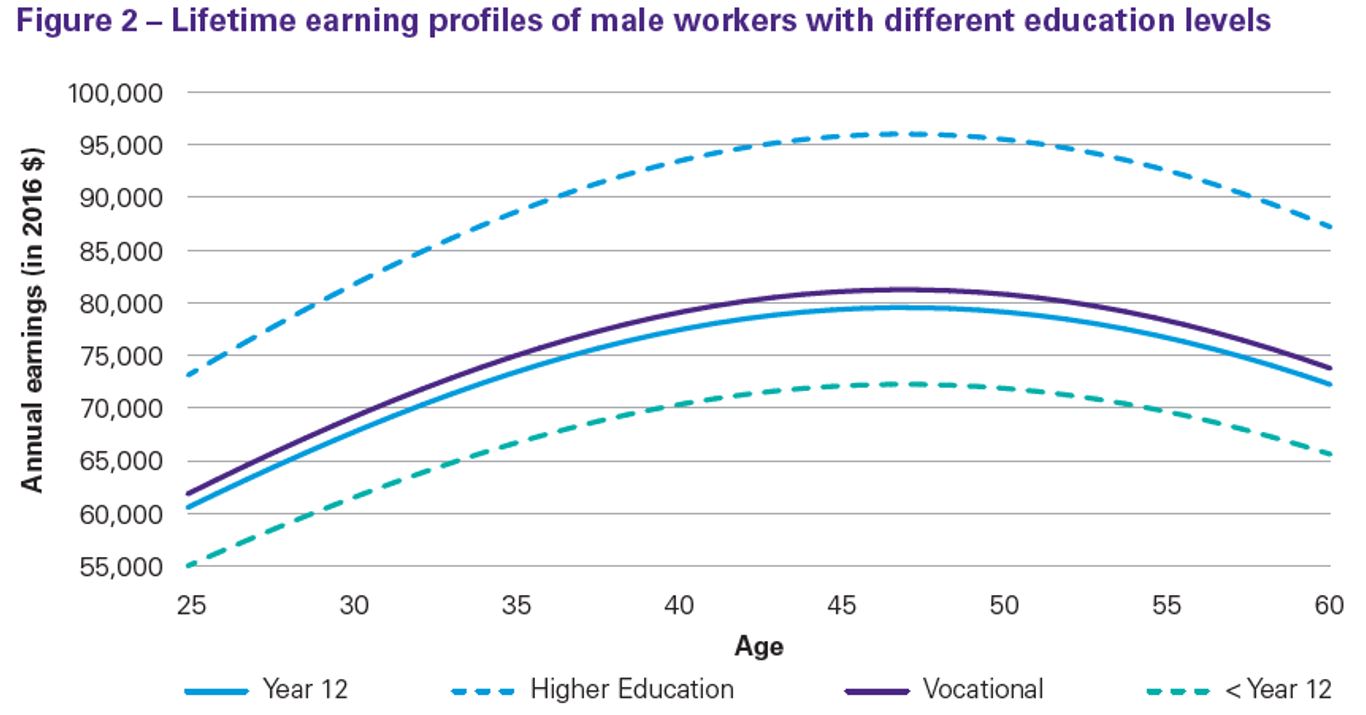 The report acknowledges that enrolments in catch-up VET courses dampens the returns. That’s a point worth contemplating. If that training is catch-up as it is supposed to be (Certificate II is equivalent to Year 12 as the policy goes) then those students should have earnings equivalent to Year 12. Then, for the remainder, about 70 per cent by my calculations, completing Certificate III or higher, you would contemplate higher outcomes. This makes the overall result for the sector more disappointing.

Some will say that the VET outcome measures collated by NCVER tell us students are satisfied with the training. That may be the case, but it’s difficult to draw conclusions from such subjective feedback. Their feedback about their jobs is more objective though. The same student survey tells us that of the 62 per cent of the students in employment at the start of their training, just over one-fifth reported getting a job at a higher skill level! Of those without work when they started, one-in-two got a job! For the 74 per cent of students who cite a job benefit from training, remember one of the three responses which give rise to this measure is simply a positive response to “received a job-related benefit.” I’m not sure these figures stack up for a sector selling jobs.

KPMG’s report cites Dame Alison Wolf, someone of enormous value to TVET across the globe, as saying: “Teenagers are entirely rational in their quest for academic qualifications … these seem to pay much better on average than vocational ones, as well as opening-up far more alternatives in a mobile changing economy.”

I recall friends from KPMG almost apologising for publishing the report. There’s little they could do. The question is what governments can do.

What can we draw from the Government’s statements? The aim is to be applauded but the path will not be easy. One thing that will help is Minister Cash’s commitment to a co-design process for implementation of the 2019 Budget measures such as the Skills Commission and Skills Organisations.

I say, give TAFEs a chance to stretch the value proposition. After all, they know a thing or two about skills for their communities and the aspiration of the students they serve.

Private training colleges will have access to TAFE campuses and will share resources and coordinate on course offerings under an MOU between TAFE SA and the Independent Tertiary Education Council Australia (ITECA-SA), signed last week.

The Minister for Education John Gardner said the agreement will see the organisations working together through joint policy priorities, professional development initiatives, closer liaison regarding the scope of delivery offered by providers, and access for independent providers to publicly owned resources.

TAFE SA Chief Executive David Coltman said the closer relationship between the sectors would ensure that local education and training needs are being met.

“TAFE SA will contribute by providing access to our campuses for other training providers and businesses, sharing professional development opportunities and making sure that the right training for future needs of industry is being provided,” he said.

ITECA’s South Australian Executive Officer Dr Joy de Leo said the state would obtain greater value from the increased use of taxpayer-funded facilities with benefits going ultimately to those in receipt of training.

The overwhelming student response to Victoria’s free TAFE initiative demonstrates the pent up demand for new skills after years of upheaval in the sector, TAFE Directors Australia says.

TDA CEO Craig Robertson said the despite some initial teething problems, the free TAFE roll-out showed that Victorians value a VET pathway and that many had been held back by upfront costs or concern about the state of the training sector.

“The undoubted success of Free TAFE in Victoria reveals more about the aspirations of Victorians for career change and new work opportunities than initial teething problems reported in The Age,” Mr Robertson said.

“Free TAFE has been the right strategy to bring people back into vocational education because it removed financial barriers and ensured options were available across the state.

“All of the sector is rebuilding, especially after the disaster of VET FEE-HELP which saw many sudden closures of private providers, leaving students stranded and TAFEs picking up the pieces.

“But it would be naive to think that upheaval hasn’t impacted TAFEs. They are also rebuilding and some teething problems in the face of such demand is understandable,” Mr Robertson said.

Dozens of training colleges have had their registrations cancelled by the Australian Skills Quality Authority (ASQA), in one of the regulator’s largest single crackdowns.

Some of the cancellations appear due to relatively minor oversights.

ASQA says the cancellations were the result of providers not operating consistently with the requirements of the VET Quality Framework, or with data provision requirements, including failing to complete and lodge annual declarations by the due date.

Training providers subject to an adverse regulatory decision have the right to have the decision reviewed, and a provider may, in certain circumstances, apply to have ASQA reconsider its decision.

The federal government will embark on a “co-design” approach with key stakeholders in developing the new National Skills Commission that will oversee the country’s VET sector.

The Minister for Employment, Skills, Small and Family Business Senator Michaelia Cash told the NCVER ‘No Frills’ conference last Thursday that the government’s skills policy agenda would “promote a national approach to skills development and enhance the role of industry in designing training packages.”

“We will establish a new National Skills Commission – to provide leadership on workforce needs and VET funding,” Senator Cash said.

“A national co-design process will determine the functions, remit and governance of the new Commission.

“The Australian Government is committed to a VET system that puts industry at its heart,” she said.

Minister Cash said departmental projections show that seven out of the ten fastest growing occupations have a VET qualification pathway.

See the Minister’s address to NCVER.

The conference will look at the future of VET and apprenticeships with speakers including the Assistant Minister for Vocational Education, Training and Apprenticeships, Steve Irons; the Shadow Minister for Education and Training, Tanya Plibersek; and the architect of the Commonwealth VET review, Steven Joyce.

The event will hear from John Tucker and Erik Salonen from TAFE Queensland SkillsTech, and will see a panel discussion with representatives from TAFE, private RTOs, Training Services NSW and Tradeswomen Australia on the future of apprenticeships, facilitated by Australian Industry Group’s Megan Lily.

The conference dinner, sponsored by TAFE Queensland, will feature TAFE hospitality and service students, and hear from WorldSkills Australia ‘Skillaroo’ Anthony Cobb ahead of the WorldSkills international competition in Kazan, Russia next month.

The South Australian government has decided against closing the TAFE campus in the Adelaide suburb of Urrbrae, but TAFE’s presence will be scaled back in several locations.

Education Minister John Gardner said TAFE SA will maintain its presence at the Urrbrae campus and continue the delivery of horticulture training, after meeting its savings targets and by  providing underutilised space to the Urrbrae Agricultural High School, which is co-located at the site.

However, the minister confirmed TAFE’s Port Adelaide campus will close in January.

TAFE SA will maintain a presence at Roxby Downs, Wudinna and Coober Pedy campuses but in a scaled back form.

Mr Gardner said the government was focused on supporting TAFE to become more competitive as a training provider.

“This announcement allows TAFE to continue to deliver specialist courses on sites where they can be best delivered, while reducing and consolidating underutilised spaces,” he said.