I’ve never done very well at those colour eyesight tests where you need to discern a number from among the dots.

You search for a glimmer of shape for the brain to fill out the rest. Our capacity to discern both fine and major patterns will be the key for tertiary education as Australia contemplates shifts in the shape of the labour market from the coronavirus.

The wicked problem is discerning the interventions to get the best possible outcome for as many as possible. Does policy encourage gambling on short-term training for the hope of a job that may not be there, or is it incentives to invest time in vocational education for jobs that hold better long-term prospects? The gamble may be worth it for many people who just want to get back into work because they have family responsibilities. The cost of living often crowds out the deeper vocational education pathway.

This has caused me to look back on some seminal work from a three-year program of research coordinated through NCVER – ‘Vocations: the link between post compulsory education and the labour market’.

The report maps in very colourful fashion the education and job pathways for broad occupations. I encourage you to look it up. Colour blindness aside, just the charts extracted here tell quite a story. Each horizontal line represents the trajectory of one individual across nine years, colour-coded to reflect different states of study, labour force status and occupation.

You can understand the policy focus on retaining apprentices as they stick with their occupation at a reasonable rate. For labourers, the colours say they mainly stay in low semi-skilled jobs.

The experience in the health and care workforce is more stable. Despite interludes, mainly due to child caring responsibility, the nurse and the carer tend to return to the field.

The darkest and most sombre of the charts tracks the journey of those not in the labour force. Those in this group operate at the edge between work and welfare. 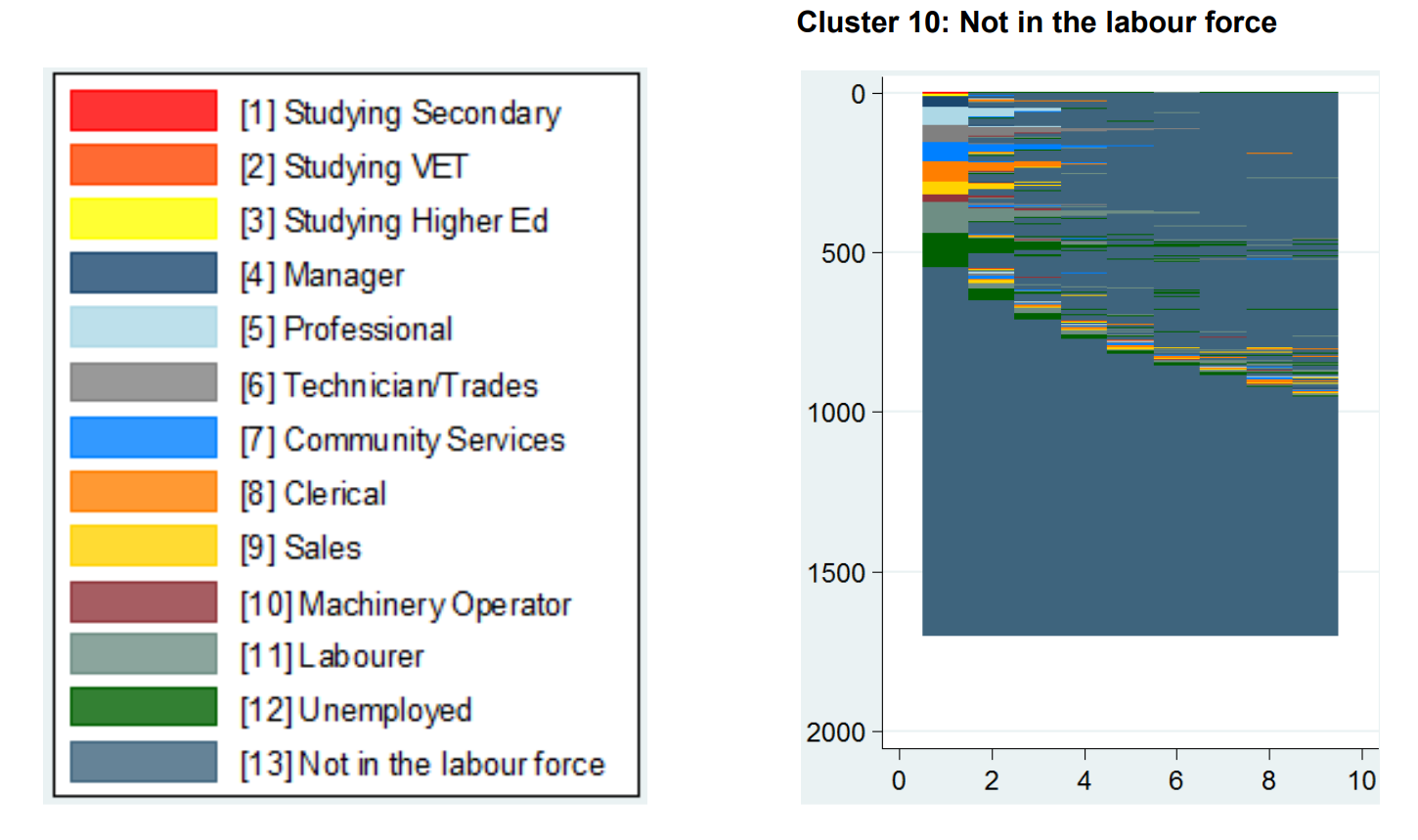 The map for all the subjects in these charts is from 2001-09, so I can’t say how much they represent the circumstances immediately pre-COVID. I bet though not much has changed.

Much is asked of vocational education and it has much to give but we need to ask why many are stuck in a low-skill, low-pay bubble, despite spells in the training system.

For those trapped in the bubble, its lack of time or resources that prevent them from engaging, let alone the lack of confidence to embark on some form of learning. They need COVID-19 policy focus to restore decent work as a human right in this country.

I’d hope that the National Careers Institute is powered to get the message to these people to embark on the skills journey. I pray there is generous student income support put in place so women and men with family responsibilities know they can take time out to prepare for a new career.

There are heaps of other messages in these charts. You couldn’t go wrong in displaying them as a handy concordance of the challenge many in society face and for inspiration to bring newfound colour to pathways of many Australians.

Skills reform is one of six areas that Prime Minister Scott Morrison has elevated through the creation of dedicated National Cabinet sub-committees.

Following a meeting of National Cabinet on Friday, Mr Morrison announced the new sub-committees to “drive a national jobs agenda”.

The six priority areas are rural and regional, skills, infrastructure and transport, population and migration, energy, and health.

“The leaders that sit around the National Cabinet table are very keen to set very clear expectations and tasking to those National Cabinet subcommittees to ensure they progress a very rapid jobs agenda,” Mr Morrison said.

The sub-committees are designed to replace the work of the work of COAG councils and will include leaders from the Commonwealth states and territories.

Even before the COVID pandemic hit Australia, the number of commencing apprentices and trainees was on a downward path.

One of the trends in commencements over the 12-month period was a sharp increase in diplomas and advanced diplomas (up 22%), as well as in the area of engineering, ICT and science technicians (up 11.5%).

One of the biggest falls was for construction trades workers (down 11.7%).

A review of senior secondary school pathways into work, further education and training has made 20 recommendations that aim to improve students’ experience beyond school.

Findings of the review, headed by Professor Peter Shergold, were presented to the COAG Education Council on Friday but won’t be handed to ministers until later this month.

The Education Council Communique said the review had identified 30 findings regarding current arrangements and made 20 recommendations “that take a new approach to senior secondary education.”

The review was asked to examine areas including certification and university entrance requirements, barriers to equitable access of pathways, and best-practice for students transitioning from senior secondary school to work, training or further study.

A background paper released by the review identified a number of problems with how VET options are presented, delivered and assessed in secondary schools.

“Inconsistent approaches towards quality assurance may have the potential to damage public confidence in VET delivered to secondary students,” it said.

The value of student debts cancelled as a result of the private college VET FEE-HELP scandal has grown to more than $1.2 billion, according to figures in the latest quarterly report of the Commonwealth VET Ombudsman.

From January to March this year, the VET Ombudsman received a further 1,045 VFH complaints, 29% less than in the previous quarter. A total of 3,290 complaints were finalised in the quarter, while 4,400 remain outstanding.

Under the government’s redress measures, the VET Ombudsman has recommended re-crediting total VFH debts worth $94.2 million to 5,838 students as a result of the policy that saw many vulnerable students signed up by colleges and left with often worthless qualifications.

However, the VET Ombudsman also works with the Department of Education, Skills and Employment on separate Secretary Initiated Actions (SIAs) which, it says, “have resulted in the removal of VET FEE-HELP debts of over $1.2 billion in tuition fees.”

Students only have until the end of December to lodge new complaints regarding VFH debts, however determination of existing complaints will continue.

“We continue to inform complainants that due to the complexity of issues presented in complaints and the large volume of complaints on hand, it may take up to 12 months for our Office to assess whether we will make a recommendation to remove their debt,” the Ombudsman says.

Australia will see a new National Evidence Institute – a body that will uncover what works best in the classroom – launched before the end of the year.

The idea for the institute was a key recommendation of Gonski review of the education system. 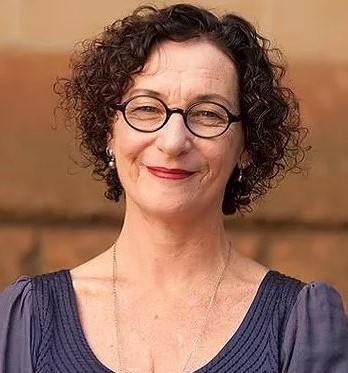 The COAG Education Council agreed on Friday to invest $50 million over four years to establish the institute, to be headed by Dr Jenny Donovan, pictured.

The institute will work with teachers and researchers to:

Dr Donovan is currently the Managing Director of the Online Formative Assessment Initiative under the National Schools Reform Agreement. She was previously Executive Director of the Centre for Education Statistics and Evaluation in the NSW Department of Education.

Dr Donovan will commence on July 1 and will consult with stakeholders and develop the initial research agenda.

A new approach to VET excellence, where VET institutions drive skills adaptation in local regions, will feature in a free online conference tomorrow, hosted by one of Europe’s leading VET think tanks.

The conference, “Centres of Vocational Excellence: Skills ecosystems for innovation, regional development, and social inclusion” will focus on the European approach to TVET excellence.

It is organised by TKNIKA, an advanced vocational training centre in Spain’s Basque Country.

It will showcase examples of five pilot projects approved under the first call for proposals for Centres of Vocational Excellence, and will provide a mixture of policy vision, strategy and practical examples to showcase the concept of excellence in VET in the European context.

Attendance is free but registration is required.