From the Chesapeake to the Yarra – comment by CEO Craig Robertson

From the Chesapeake to the Yarra – comment by CEO Craig Robertson

The proposed US infrastructure plan of President Biden is eye-watering. A massive US$2 trillion – that’s 2,000 billion – and comes on top of the America Rescue Package of US$1.9 trillion.

For policy diehards it is inspiring – in one part folding education and training into the mainstay of economic strength and as a vehicle of recovery for a faltering economy. And, in other part, recognition that wages and opportunity can’t be sidelined in the recovery.

I’m no political economist but it is no coincidence that Washington DC, on the upper bounds of the Potomac River leading up from Chesapeake Bay, may be the birthplace of a new form of economic development. English colonisation of North America – around Chesapeake Bay – tells a story about the birth of individual opportunity.

Daron Acemoglu and James A Robinson in their seminal work Why Nations Fail – The Origins of Power, Prosperity and Poverty offer a quick lesson on English settlement in North America – around the Chesapeake. Seeking to exploit the local tribes for gold and silver like the Spaniards had succeeded in South America, the settlers were confronted by a resolute alliance of (American) Indians. Failing in their attempt to ‘extract’ wealth, the settlers were required to toil by hand for survival, with the harsh winter of 1609-10 almost ending the endeavour with 440 of the 500 settlers starving to death.

Starting over, King Charles I gifted land to Lord Baltimore to establish the province of Maryland (adjacent to Washington DC). Baltimore also planned an extracting regime of another form, on his own settler community! Strict society hierarchy with landholding gifted to proprietors along with the wealth and power that followed. The underclass demanded their own land and with the New World offering so many other options for earning a living outside of servitude to the landholders there was little option other than opening land to all. Economic freedom was soon followed by political rights at least for all free males (not women or African Americans at that stage).

This form of democracy created inclusive economic instruments and opportunity for all, which may have faltered had it not been for this one pocket of resistance from the local tribes around the Chesapeake.

Much has changed since those days, including the belief of the 1980s, thanks to Thatcher and Reagan, that government should get out of the way in favour of private effort. The American Jobs Plan – the actual title of the package – is a new way of opening-up opportunity. As with Roosevelt’s New Deal that got people back into work following the Great Depression, post COVID calls for Government intervention and spending to spread wealth through opportunity.

The philosophy aligns with the approach recommended by Jenny Macklin in her report to the Victorian Government – Future Skills for Victoria[2]. Macklin says: “skills deepening that is coordinated with industry policy not only meets new skills needs, it also helps to capture those industry opportunities in the first place.”

As if heralding Biden’s model, Macklin describes it as an active skills policy, ‘change will only occur… when these new industry opportunities are integrated with skills policy to produce structural reform to accelerate economic, industry and jobs growth’.

Critics are questioning whether the resulting debt burden makes the investment risky. The US golden era post World War II was laid by the New Deal. Americans who were afforded opportunity contributed to a great wave of economic growth. Americans may be thinking the same is needed again – 70 per cent of American adults support the $1.9 trillion rescue package[3]. And an active, skilled and well-remunerated workforce of 160 million who pay taxes would appear a reliable strategy to pay down debt.

Australia has more room for such investment according to John Edwards, former member of the Reserve Bank Board and member of the then Australian Workforce Productivity Agency. IMF figures show deficits in the US and Canada as one-fifth of GDP compared to just one-tenth in Australia, and the cost of servicing Australia’s debt, even accounting for the large expenditures like Job Keeper, is less than pre-COVID levels because of extraordinarily low interest rates[4].

It might be some distance between the Potomac and the Yarra but the thinking comes together. New investment in skills as soft infrastructure offers opportunity for all. In our case, inspired by Biden and outlined by Macklin.

The Australian Skills Quality Authority (ASQA) has outlined a fresh approach to dealing with training providers, based on a “positive risk culture” that will see a greater array of options for dealing with non-compliance.

The new approach is contained in the first version of ASQA’s ‘Regulatory Risk Framework’ which comes after extensive consultation with stakeholders, and is based on what it describes as “mutual respect and learning”.

“We accept that, despite best efforts and robust risk management practices, things will go wrong,” the paper says.

“We are committed to a positive risk culture based on the premise that we will review the reasons for failure, and use our learnings to further strengthen our systems, processes and controls, reducing the likelihood of reoccurrence.

“Achieving this positive risk culture will rely on the individual and collective contribution of everyone working in ASQA, as well as relationships with stakeholders that are based on mutual respect and learning,” it says.

The review  sets out a graduated series of actions for dealing with non-compliance, noting that in many cases these will be “relatively minor and easily fixed”.

ASQA’s approach is laid out in a “regulatory pyramid” where low level risk may involve education and a voluntary response from a training provider, escalating to enforcement in cases of sustained and more serious breaches. 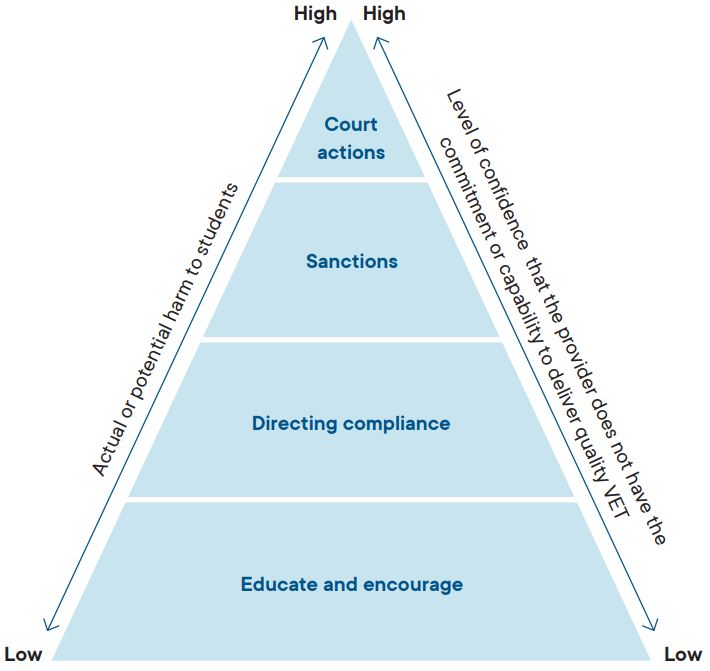 National Skills Commissioner Adam Boyton will discuss some of the key issues currently in VET this Thursday in the first of TDA’s new podcast series, TAFETalks.

Mr Boyton will be in conversation with TDA CEO Craig Robertson on the year ahead in VET, and the critical work being undertaken by the NSC on labour market and workforce analysis, and VET pricing and performance.

The event is free but registration is essential.

Longstanding VET sector leader Janelle Chapman has been appointed Executive Director of the Australian Pacific Training Coalition, which provides Technical and Vocational Education and Training across the Pacific region.

Having taken up the position on an interim basis earlier this year, Janelle is currently leading the APTC change process required to respond to the devastating impact of COVID-19 in the region.

APTC was established in 2007 as the Australia-Pacific Technical College, and is managed by TAFE Queensland on behalf of the Australian Department of Foreign Affairs and Trade (DFAT).

“It is important to note that whilst Janelle had not initially intended to apply for this role, her welcome in Fiji, and the international experience and opportunities she brings to APTC inspired her to take on this next professional milestone,” Ms Campbell said.

Janelle said one of her key roles will be to deepen relationships with key stakeholders in partnership with DFAT, including with Pacific Governments, donors, industry groups and national TVET institutions.

“I’m excited by what can be achieved through the APTC,” Ms Chapman said.

“Skills development in the Pacific gives people opportunities for fulfilling careers that also supports the growth of local industries.”

All sides commit to TasTAFE funding as state election looms

Tasmania’s Labor Opposition has matched the government’s commitment for increased spending on TAFE, in the countdown to the state election on May 1.

She also committed to free courses in areas of skill shortages including construction, tourism, nursing and aged care.

The state government had earlier pledged an extra $98.5 million for TasTAFE to fund 100 extra teachers, new infrastructure and increased access for rural and regional students.

The Gordon is one of the first Victorian education institutes to host an event at the newly established Victorian government Study Melbourne Hub in Shanghai.

The inaugural hub is part of the government’s $33 million international education recovery plan, which includes a global network of hubs in strategic international markets.

The initiative supports international students studying remotely overseas to come together and access support and information on the professional and lifestyle benefits of studying with a Victorian education provider in addition to providing a shared space for networking events.

Joe Ormeno, CEO of The Gordon said that in the face of the challenges posed by the pandemic, the flow of talents and resources between countries and regions is becoming increasingly important.

“The Gordon embraces this trend and remains committed to academic exchanges and cultivating talent with a global vision.”

“Today’s roundtable is the first official provider engagement activity and I wish to acknowledge all parties who contributed to this effort, in particular the leadership provided by The Gordon and Chongqing Education Association for International Exchanges,” he said.

The Gordon’s relationship with the Chongqing Education Association for International Exchanges has seen the institute providing education and training to more than 80 participants in China. 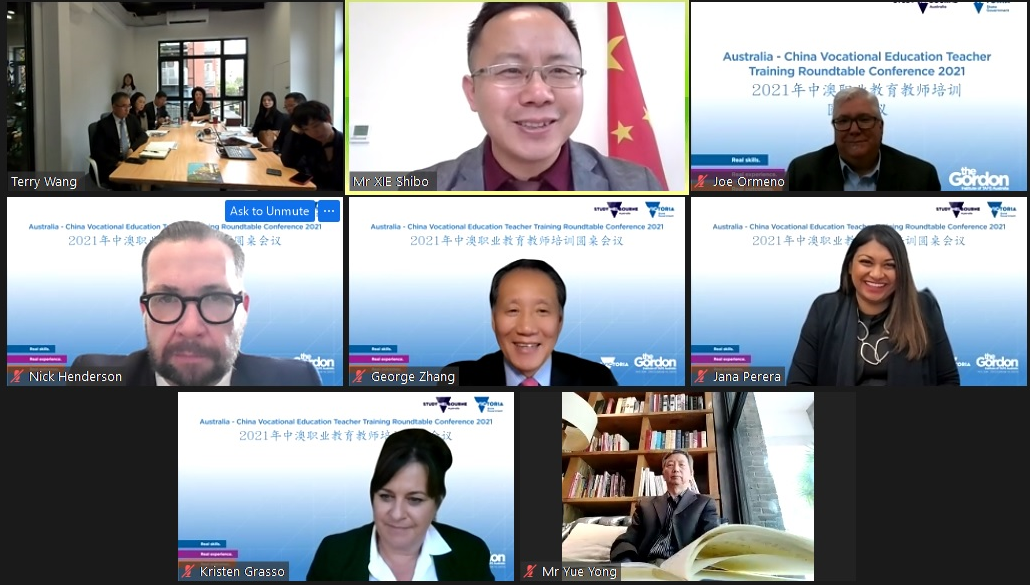 At its meeting last December, the AISC decided to delete a number of training products from the register. It also agreed to a process for reinstating units and qualifications where there was a strong rationale for doing so.

“Since this meeting, the AISC has received representations from industry in relation to a number of products that either have enrolments, or which are anticipated to have utility over the short to medium term,” the AISC says on its website.

The AISC says it reviewed the advice from Industry Reference Committees at its February meeting and found that there was justification for reinstating a small proportion of training products previously removed.

The new centre is a key part of a $42 million upgrade of TAFE campuses on the Gold Coast.

Touring the facility, Ms Palaszczuk said the global pandemic had highlighted the importance of investing in health and health professionals, while giving frontline health workers the skills and training needed.

“The Southport campus is TAFE Queensland’s largest facility on the Gold Coast and enrolments have been climbing in recent years as the region grows,” Ms Palaszczuk said

She said that nursing and allied health enrolments have grown at the campus by 40 per cent over the last financial year with more than 3,680 students enrolling in courses.

The new facilities include a modern simulated ward, lab environments and refurbished classrooms that enable the delivery of training using the latest technologies, including the use of mixed reality Halolens technology.

The Victorian government is inviting applications for board positions on the state’s TAFE Institutes.

The Department of Education and Training is running advertisements seeking people for the part-time roles, with skills in particular areas, including corporate governance and leadership, higher education and vocational training, financial management, and strategic thinking and innovation.

Expressions of interest close May 3.