From broadcast to me-cast, lessons for micro-credentials – comment by CEO Craig Robertson

From broadcast to me-cast, lessons for micro-credentials – comment by CEO Craig Robertson

Most of us have seen the transformation of the media in our lifetimes. From broadsheet and broadcasting, to narrowcasting and podcasting and now, me-casting.

It tells a tale that resonates with micro-credentials.

There’s been little policy action since. What do we mean by micro-credentials? In large part they are part of, or a segment of a formal qualification. But they can go beyond that in the real world. Industry associations are developing badged courses and global platforms are offering bite-sized learning opportunities, often with the teaser that the learning can be made official if the participant presents for assessment to a registered education body.

The review of the AQF defined micro-credentials as: a certification of assessed learning that is additional, alternative, complementary to or a component part of a formal qualification.

The AQF expert panel came down on the side of formal learning, recommending that valid micro-credentials need to be formally recognised. That means learning outcomes must meet the expectations of accreditation, similar to regular qualifications, and that brings in government-backing in all three education sectors: schooling, vocational education and higher education.

But to contemplate the broader trends at play let’s unpack media transformation. Only The Australian survives as a printed broadsheet. Its pedigree is it contains serious stories built on deep analysis and the best of investigative journalism. Broadcasting is more familiar through our free-to-air channels. Families sit down and watch one-off events as they are beamed to every TV in the country, but at the choosing of the broadcaster.

Pay TV is the best-known form of narrowcasting – consumers subscribe to the type of shows they want to watch. Podcasting and free-view TV are on-demand. Consumers are in control, subscribing to what they want to consume at their timing.

Me-casting is the ultimate in consumer driven communication. Known more through FaceBook, Instagram and Tik-Tok, users create the content – good, bad or offensive – and cast it to their subscribers.

Three trends are apparent. Entertainment is far more accessible; the consumer is now in control and in the case of me-casting, there is virtually no quality control.

There are deeper trends which should take the attention of educators when these trends are applied to micro-credentials: de-institutionalisation and democratisation.

Formal credentials import institutional rigour. How the content of a qualification is authorised, what organisation can deliver it and how it is delivered and assessed, are important assurances from government for the consumer. Many things frustrate educators about qualifications, but in the end they carry a seal of authenticity backed by governments. Non-formal micro-credentials have freedom in design and can ignore these requirements. Admittedly, they can be mirrored because governments are not the sole purveyors of good education design and the boundaries of formal learning such as validity of content, calibre of the pedagogy and rigour of assessment can be pushed.

The consequence of this de-institutionalisation, however, is buyer beware! Until governments seek to regulate non-formal micro-credentials the protection offered through formal learning is not there.

Democracy gives a free voice to the citizen. It sounds a good thing in the context of the complex geopolitical situation in the world. Surely the Arab Spring, which saw citizens drawn by social media to protest oppression, is a good thing. I couldn’t disagree. When it comes to me-casting, however, the democratic consequence is that any truth will do, especially if it titillates and sensationalises. There is plenty of evidence for this even to the extent of QAnon in the United States which claims the US Government is run by criminals.

Credentials, by their very nature, can’t afford this laisse faire relationship with truth and knowledge. Scientific knowledge and rigorous social science have been built up over the centuries and openly tested since the enlightenment, and when knowledge was made available to the masses when the printing press was invented. Good education curates knowledge into forms and processes so it can be learnt. Credentials, including in their micro form, must uphold this attribute. The AQF review got it right by insisting on formal assurance processes for micro-credentials.

Nevertheless, micro-credentials hold the promise of accessible on-demand learning. This does not exclude global platforms or industry badges from playing a key role in the learning eco-system, except that their limitations need to be made known to consumers. On the other hand, they can also seek to be recognised by the mainstream education systems, but they need to accept the regulation that goes with it.

Much is also said about stackable credentials – the sense that bite sized learning satisfies the appetite for capability and success in life. The attributes of a qualification represent a holistic dealing with a field of learning and that process of learning builds capabilities that prepare the student for the experience of work, and life. A qualification provides a solid base to then venture into micro‑ credentials – then stack away.
The National Skills Commission has indicated that over 93 per cent of new jobs will require education beyond school. A full qualification pays dividends.

Australia has failed on three of four key VET reform goals which were put in place a decade ago and designed to deliver a more productive and skilled workforce.

The Productivity Commission’s 2021 Performance Reporting Dashboard shows that progress on critical areas of skills reform agreed to by the Commonwealth, states and territories has not been met and, in one case, has gone backwards. 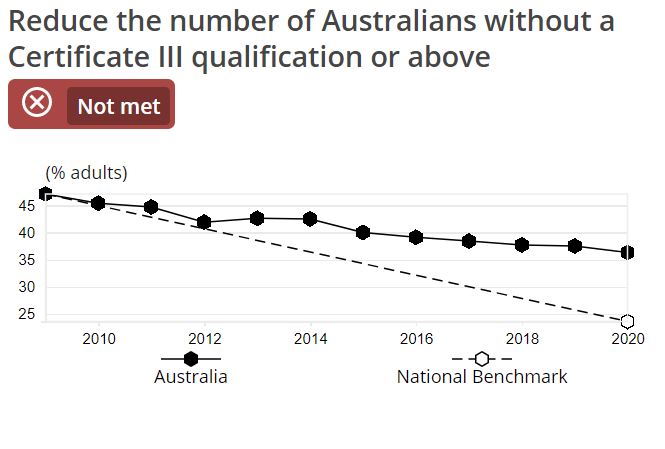 The goal was to halve the proportion of Australians nationally aged 20–64 without qualifications at Certificate III level and above between 2009 and 2020. In 2020, the proportion of Australians aged 20–64 without qualifications at the Certificate III level or above was 36.3%, and while a 10.8 percentage point decrease, it does not meet the 2020 target of 23.6%. 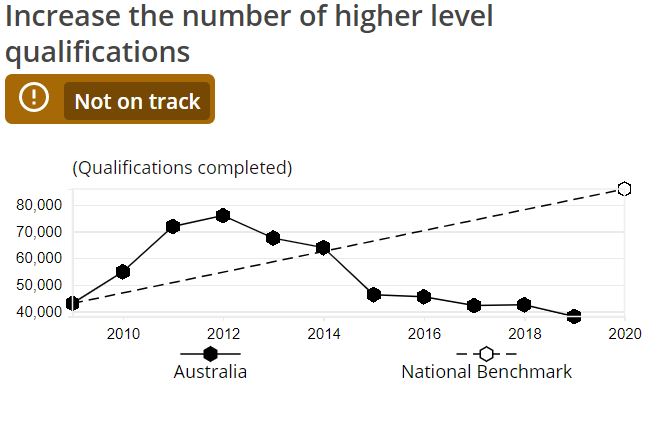 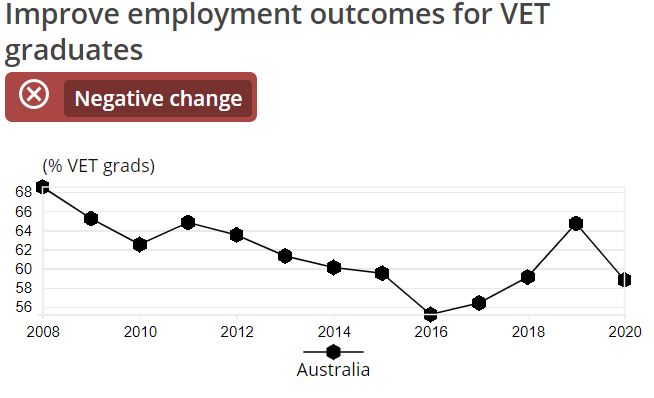 Between 2008 and 2020, there was an 9.7 percentage point decrease in the proportion of VET graduates aged 20–64 years with improved employment circumstances after training. There were significant decreases in over half of all jurisdictions. The commission says the impact of COVID 19 may have affected 2020 data. 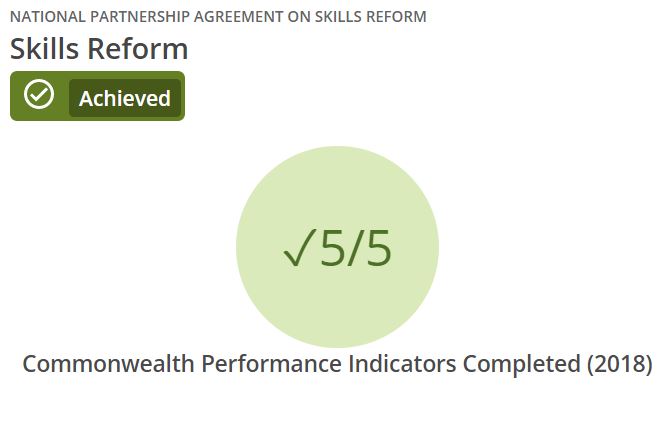 The Commonwealth committed $1.75 billion over five years for a National Partnership Agreement on Skills Reform to reform the vocational education and training system across the states and territories. This was met by all jurisdictions – the only one of the four benchmarks achieved.

The Western Sydney Aerotropolis Multiversity – a collaboration between four universities and TAFE NSW – has announced its first courses and scholarships for students in the areas of science and technology.

The Multiversity program has been developed with industry and differs from traditional educational offerings in how it brings together disciplinary and knowledge-based education with industry-relevant skills at all levels of the AQF.

The Managing Director of TAFE NSW, Steffen Faurby said the collaboration between TAFE NSW and the consortium of universities responds directly to the growing demand for digital engineering apprenticeships incorporating technology such as cyber-physical systems and additive manufacturing.

“Graduates with these skills are in demand for smart farming, mining, aerospace, defence manufacturing, robotics and food manufacturing industries,” he said.

Students can tailor training to meet individual and industry needs and on completion of one of eight short undergraduate certificates or the new Diploma in Aerotropolis Industry 4.0 (Mechatronics Skills), will receive advanced standing into higher level courses at the participating universities.

An innovative training project delivered by BHP Mitsubishi Alliance, TAFE Queensland and CQUniversity, has been recognised as the Outstanding Training Initiative of the Year as part of the Resources Training Council’s 2021 Innovative Skilling Awards.

More than 100 Year 10 students from schools across the Isaac Region are involved in the training pathway specialising in new, digital, and autonomous technologies.

“There is often much discussion about future workforces and through the QFS Partnership we are taking action now to deliver the skills into Queensland communities that will be needed in the next five, 10, 15 and 20 years.”

CQUniversity’s Deputy Vice-President, Vocational Education and Training, Peter Heilbuth said the delivery model of the partnership represented an exciting step forward when it comes to engaging with industry to develop and deliver future- focused skills training. 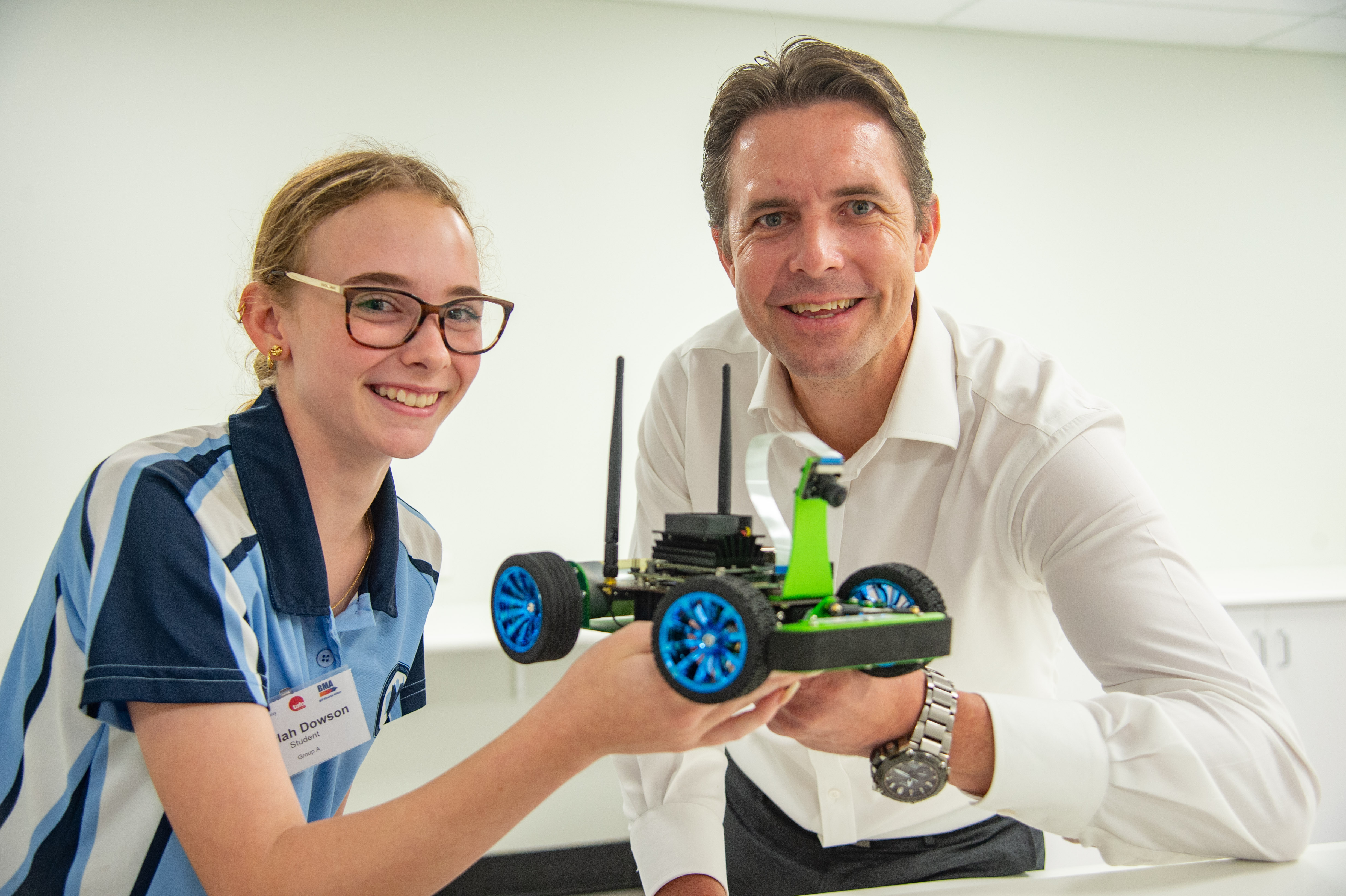 The Training Centre for Aged Care at CDU’s Casuarina campus will primarily deliver VET qualifications with the opportunity to expand into higher education programs and research.

It will provide a learning environment for 24 students with room for four aged care beds and equipment that will mimic an aged care facility to aid student learning.

The Territory government is contributing $1.7 million for the facility.

Professor Bowman said the centre will aid the training of future aged care workers and allied health professionals to service the needs of the Northern Territory community.

“We know that support, training and development are essential for the future workforce to ensure safe, high quality aged care is delivered for Territorians,” he said 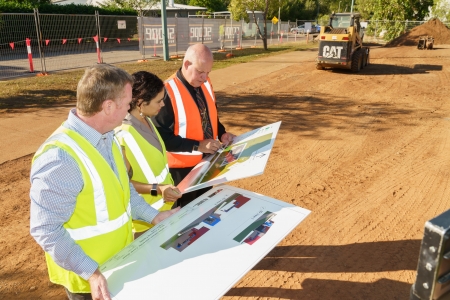 Ministers Paul Kirby and Lauren Moss with CDU Vice-Chancellor Scott Bowman on the site of the new training centre for aged care.

If you have a passion for the future of TVET across the world, there’s an opportunity for you to put it to paper.

As part of its development of a Global Statement of Professional Technical Education and Training (PTET) the World Federation of Colleges and Polytechnics (WFCP) is asking for contribution of Foresight articles.

The invitation is open to members of WFCP to contribute Foresight articles which point to the future of TVET within a country or across the globe.

Expectations for the article are that they explore current or future issue(s) of relevance and set a challenge for TVET globally or at a country or institute level.

Further details are available from WFCP.

Job vacancies have reached a 12-year high as the employment market bounces back, according to preliminary figures from the National Skills Commission (NSC).

The NSC’s Internet Vacancy Index (IVI) shows that online job advertisements increased by 4,500 or 1.9% in May, to stand at 245,400 – the 13th consecutive monthly increase.

The NSC said the growth in the series sets a new 12-year high, with job advertisements at their highest level since October 2008.

Over the month, job advertisements increased across all states and territories except Tasmania, where recruitment activity declined by 1%. The strongest increases were in Queensland (6.4%), South Australia (4.5%) and Western Australia (4.4%).

Recruitment activity has surpassed levels prior to the pandemic, up by 46%, or 77,300 ads, compared to pre-COVID-19 levels.

A  million VET students asked to rate their experience

Almost one million VET students have started receiving a survey about their education and training experience, as the NCVER’s latest National Student Outcomes Survey gets underway.

The 2021 survey elicits information about satisfaction with training, employment, and further study outcomes and, this year, includes a new set of questions for apprentices and trainees as well as questions about the COVID-19 experience.

Approximately 889,000 domestic and 63,000 international onshore VET students who completed VET in 2020 will be contacted.

Survey results will be available later this year.