Last week was an incredible week. I would like to begin this week’s newsletter by congratulating everyone on such a wonderfully successful National Skills Week and the outstanding launch of the WorldSkills Australia National Championships – our Olympics of trades.

Given the current lockdown restrictions and border control measures across Australia, I would like to commend everyone involved for turning uncertainty into opportunity for our students.

In a week when we asked people to ‘RE-THINK’ their ideas of what VET is all about, I think these events clearly demonstrate our ability to respond quickly and effectively to the skills development and training needs of our governments, industries, students and communities.

We all know there are many pathways to success and events like these not only highlight the importance of VET, but most importantly I was delighted to see the spotlight shine so brightly on so many of our inspiring students. 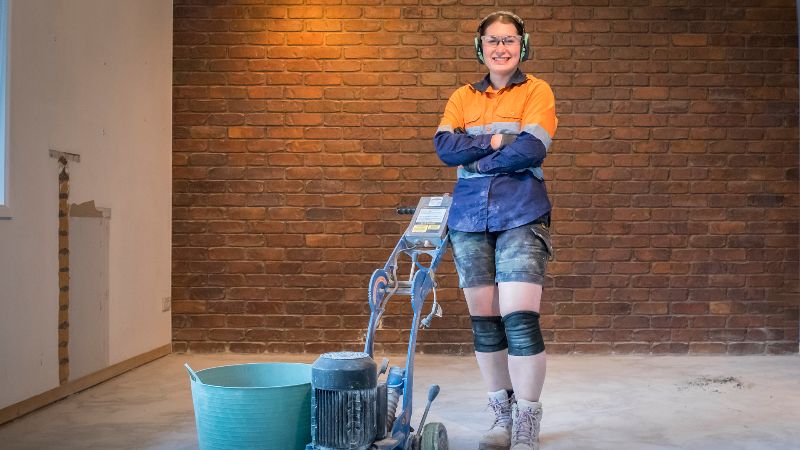 One heartening story that inspired me was 19-year-old Ada Lacey. Ada has represented Australia (several times) in synchronised ice-skating, luge (yes, luge!) and was an Australian weight-lifting champion at age 14.

Ada’s athleticism saw her primed to begin her 2022 Beijing Winter Olympics qualifying campaign in 2020, but COVID-19 upset her plan and has sadly delayed her dream until the Milano Cortina Winter Olympics in 2026. Consequently, she decided to start preparing for the future – finding a career.

While casually scrolling through TikTok in late 2020 she came across a bricklaying and tiling video, which had her entranced. Having “never picked up a tool in my life” Ada jumped on to the internet immediately to see how she could get involved, as she needed a career to fall back on outside of her athletic pursuits.

Ada learned that she was eligible for JobTrainer funding and to get a feel for the types of careers available in the building and construction industry she enrolled in a Certificate I in Construction at TAFE Queensland in 2021.

It will come as no surprise when I tell you that she excelled in her prevocational course and secured work experience with a local tiling employer. I am thrilled to say that Ada has since been offered and commenced an apprenticeship with her employer and is back at our Bracken Ridge campus completing her Certificate III in Wall and Floor Tiling – all in under a year!

We can each share similarly inspiring success stories and, to me, these stories demonstrate so powerfully ‘the why’ of what we do – to give people the practical, hands-on skills to do extraordinary things. We all know the power of training and skills, and are in the privileged position of being able to help our students to achieve their career aspirations.

In closing, I would like to again acknowledge the tremendous efforts of everyone involved in bringing last week’s events to life, and recognise the wonderful work everyone is doing in ensuring our students gain the skills they need to change their lives and build lifelong careers.

Thank you and have a fantastic week.

The Minister for Employment, Workforce, Skills, Small and Family Business, Stuart Robert has delivered a blunt assessment of key elements of the VET sector, including apprenticeships and qualifications development.

Speaking last week at the virtual launch of National Skills Week, Mr Robert described as “ridiculous” a system that requires skills ministers to approve every qualification, and said the VET sector had failed to respond to training in key areas such as IT and energy.

“Why do we have 67 Industry Reference Committees that go back and forward through SSOs (Skills Service Organisations) and then up to the AISC (Australian Industry and Skills Committee), and then finally up to skills ministers?

“Why do I, as a skills minister, sign off on every single change to a trade qualification – do you really want my considered view on the new practices of TIG welding or how we update rooftop gardening, or whatever skill change we need?

“Why is it we have such a proliferation of careers advice? We’ve launched the National Careers Institute to try and harness that, but we still have so much information and so many different approaches to careers advice,” he told the online audience.

One of his main targets was apprenticeships, which, he said, have scarcely changed since the days of Charles Dickens: “Why does it take four years to do an apprenticeship? Why is it only 2% of people doing apprentices actually have recognition of prior learning, even though vast percentages of them are mature age students?

“Why is it that only 54% of our apprentices actually complete? Thirty-six per cent actually drop off in the first year.”

He said the government was spending $3.7 billion on the Boosting Apprenticeship Commencements wage subsidy, but based on completion rates, “we expect to tear up $1.8 billion of that.”

Noting “very entrenched views”, he said the apprenticeship sector appeared “the last area that’s holding out against the disruption of technology”.

“Why is it that we only have about 15 accredited courses in technology, and less than 4,000 people in the last 12 months graduated with a Certificate IV in Information Technology, yet we need 150,000 a year and universities are only putting out 6,000?”

“Why is it we haven’t embraced microcredentials and allowed these to be racked and stacked?”

He said the entire VET ecosystem was designed to be “slow and clunky” at a time when it needed to be agile. 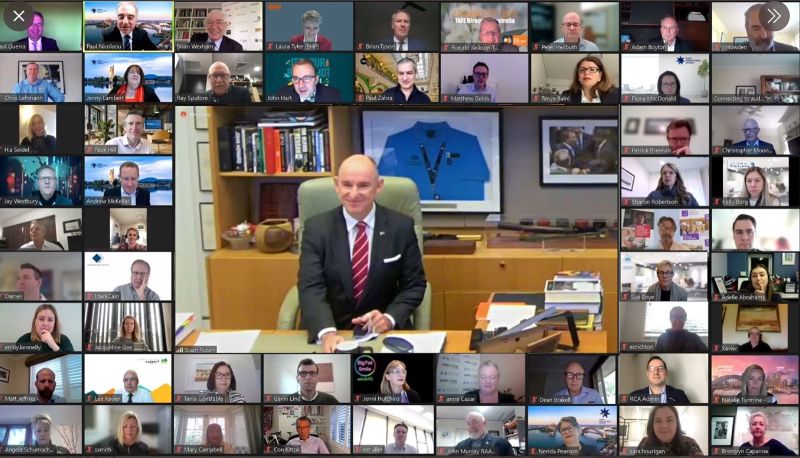 While the individual examples of TAFEs partnering with industry were powerful, the dominant message delivered by the SOs and SSOs was that more tailored solutions are needed now. Industry representatives were clear that the system is in a state of change to accommodate new qualification and delivery design to achieve speed to market.

Four TAFEs, embracing NSW, WA, Victoria and Queensland provided stimulating presentations about the connections they are building with industry and tertiary education partners to create specific industry solutions. From digital technology at TAFE NSW’s new Institute of Applied Technology, to wind energy in South-west Victoria, to local regional solutions such as skill shortages brought on by lack of skilled migration to meet harvesting demands in WA, to the TAFE Queensland BHP Mitsubishi Alliance that also includes CQUniversity to support skills development in new technology in mining, all discussed fast-tracking solutions. TAFE Queensland also explored the use of micro-credentials as part of these solutions. (Let’s talk more about micro-credentials in another newsletter soon).

The SOs and SSOs made a plea for more collaboration between industry, TAFE, and other parts of the education sector. While this message is not new, it will only be enabled by a system that is more agile and enables innovative solutions. In the examples above, TAFEs demonstrated how they are partnering with industry to find these bespoke solutions. While innovation is key, the TAFE examples demonstrated how it must go hand-in-hand with quality outcomes for students.

We’ll have links to these presentations in the TDA newsletter next week. As my first piece for TDA as the Interim CEO, I was delighted that my message is about innovation and solutions to meet the skills needs of industry. Friday’s dialogue was rich and the examples were empowering. It was a fitting end to National Skills Week.

As Mary Campbell from TAFE Queensland said above, last week and over the weekend we also witnessed demonstrations of extraordinary skills by our TAFE WorldSkills competitors participating in competitions in various parts of the nation. And, there is more to come when other States move out of lockdowns. We acknowledge and thank all these students for leading skills excellence and showcasing the enormous value of a VET qualification.

The shift to online VET delivery that occurred during the COVID pandemic appears to have become more permanent, with more than half of training providers intending to maintain blended learning.

A study by NCVER shows that more than 61% of RTOs that transitioned to at least some online training in response to COVID-19 indicated they would be more likely to use blended learning in the future.

Approximately 12 months after the commencement of COVID-19 restrictions, only about a quarter of the surveyed RTOs who had transferred some face-to-face training online had reverted fully to their pre-COVID-19 approach to training.

NCVER said the survey shows a strong pattern of RTOs continuing to offer online training in areas where it was not available before COVID-19 appeared.

More than a third of respondents had only partially returned to their pre-COVID-19 approach to training delivery, while 23% were expanding online delivery, with a further 12% continuing to operate at the same level as their initial shift online.

The report is the first of two NCVER reports that explore the VET sector’s response to COVID-19.

See ‘The online delivery of VET during COVID-19: Part 1’

The Tasmanian government has committed almost $100 million over four years to TasTAFE, as part of last week’s state budget.

The 2021-22 budget includes more than $135 million for skills and training, with $98.6 million targeted to TasTAFE, including:

The Minister for Skills, Training and Workforce Growth, Sarah Courtney said the new investment would help drive the economy and ensure a future-focused TasTAFE.

JobTrainer enrolments nearing a quarter of a million

The number of enrolments in the joint Commonwealth, state and territory JobTrainer program is approaching a quarter of a million, as more people sign up for free or low-fee skills training.

The JobTrainer program provides a range of accredited diplomas, certificates and short courses in areas including health, aged and disability care, IT and trades.

The Minister for Employment, Workforce, Skills, Small and Family Business Stuart Robert said that at the end of July, there had been 239,290 enrolments in JobTrainer. Around 55% have been women and around 48% were young people aged 17–24.

“It is pleasing to see that women make up more than half of the enrolments and that critical industries like care, health and trades are among the most popular course choices – it is great news for both Australian job seekers and Australian businesses,” he said.

Five of the 10 most popular JobTrainer courses have been in qualifications related to care sectors, including aged care, disability care and early childhood care.

The program commenced in July 2020 and was extended by two years in the May budget, subject to agreement with the states and territories.

More than 70,000 students have enrolled in Victoria’s Free TAFE initiative over its first two years, with savings to students estimated at more than $150 million, according to the 2020 Free TAFE Report Card, prepared by the Victorian government.

The report finds that over the two years, Free TAFE enabled more people, who may have previously missed out, to commence a course, including 50% more women, 45% more culturally and linguistically diverse students, 41% more learners with disability, 43% more unemployed and 26% more from regional areas.

There was a big jump in commencements in early childhood education and care courses which more than doubled since they were added last year.

Overall enrolments at the end of 2020 increased by 21% on the previous year.

The Minister for Training and Skills Gayle Tierney said Free TAFE has been life-changing by placing more people into jobs and building meaningful career pathways for tens of thousands of Victorians.

The Department of Education, Skills and Employment has released the indexed VET Student Loan course cap amounts for 2022.

The course cap is the total amount of loan an eligible student may access for a particular course. The course cap amounts are indexed annually.

New and continuing students will have access to the following maximum loan amounts for any census days that occur from 1 January 2022:

Human Services Workforce Forum Melbourne
7 October 2021
Register your interest in attending this event via the below links:
Employers – 9.30am
Training Organisations – 1.30pm