AFL fanatics in Melbourne and Adelaide with a few years behind them will recall Waverly Park built on the old market gardens of Mulgrave and Football Park in West Lakes in Adelaide. They were wide expansive playing fields away from the city. Public transport was poor and sweeping cold winds chilled the spectators who, in the best of seating, felt distant from the action on the field.

New stadia like Adelaide Oval and Optus in Perth furnish intimate viewing platforms. The trend started 20 years ago with Docklands in the Melbourne CBD, topped off (literally) by a retractable roof to deal with Melbourne’s erratic winter weather. Location was also pivotal. A short walk from the CBD across the Torrens gets you to the Adelaide Oval, and Docklands now snuggles among high rise corporate buildings on the Western edge of the CBD, walking distance to the train station. Crowds have grown as a result.

Some research used by Steven Joyce that led to the National Careers Institute has been a curiosity. In an extract below, it points to the disjoin between education and training and the aspirations of young people. The Department of Prime Minister and Cabinet recently released the base report[1]. It’s an easy read so I suggest you have a look.

Joyce uses the analysis to raise the concern that many students’ career aspirations were not aligned with their educational plan, which could leave them overqualified. For example, as shown in the chart, 45 per cent of those surveyed intended to complete a bachelor level degree, when they need a certificate. Others risk underqualification – 33 per cent intending to pursue a VET pathway when they need a bachelor’s degree.

Over or under qualified aside, the bigger question is that of aspiration. Of the young people surveyed 63 per cent aspire for jobs requiring a bachelors’ qualification, the remainder for jobs needing a certificate. Joyce quotes from The Grattan Institute and Mission Australia that university is now the default post-school activity for many young people, with 67 per cent planning to go to university, compared with 14 per cent intending TAFE or another RTO, and 9 per cent an apprenticeship.

These are strong indications of consumer intent that may be difficult to turn in favour of VET. Efforts so far have enlisted Scotty Cam and promised new websites, but ultimately seem focused on VET.

The Business Council of Australia for some time has been asking for joined-up information for all occupations and all post-school learning pathways. The National Skills Commission (NSC) released its first major publication[2] on 1 July on the Australian labour market. It’s well worth the read and provides plenty to ponder but dwells on occupations served by VET alone. If VET is the sole focus, the NSC risks serving only the 23 per cent of young people who see VET as an avenue for them, or the difficult task of turning university-destined young people to VET. On the latter, it’s fighting against the wage premium from the university option, as shown in the diagram extracted from the report. 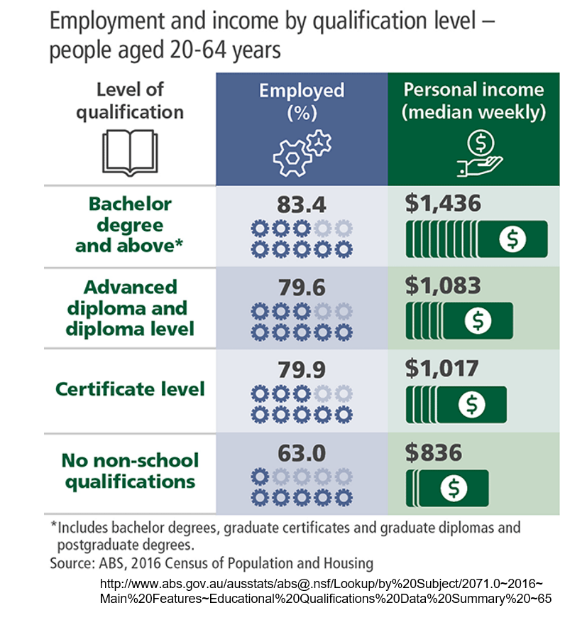 This brings us to the tertiary agenda and the Australian Qualifications Framework. The 33 per cent gap in personal income outcomes between VET and university compared to the 6 per cent between Certificate and Diploma levels is indication enough that the AQF needs fixing and, from that, a decent look at tertiary structures will fall out.

The VET sector, including industry, shouldn’t be afraid to participate. People are attracted to quality vocational education for a range of reasons – the nature of the learning, camaraderie, acquiring contemporary skills for work and life, and the input versus outcome trade-off – and more would be if tertiary structures were aligned.

The alternative approach might be to try harder at selling VET, and we’ve seen that attempted before. Or are we trying some sort of elaborate mind engineering to convince people to give up their aspiration? If the upheaval in the economy and society wrought by COVID is a once-in-a-century event, then surely now is the time for major structural reform.

The lessons from Waverly and Football Park is that a major re-orientation was required, not refurbishment. Vocational education can be powerful and transformational because many of us have seen it first-hand. We need to acknowledge the aspiration gap and think seriously about how to overcome it. Refurbishment isn’t enough. Only a complete re-orientation will do. Let’s look to the Skills Commissioner and National Careers Institute to bring these dimensions into play.

Training reform about quality, not the lowest price: Adam Boyton

The head of the National Skills Commission has sought to assure training providers that the organisation will not be focussed on driving down the prices charged for courses, as part of a more competitive pricing model.

Interim National Skills Commissioner Adam Boyton told the NCVER ‘No Frills’ conference on Friday that one of the organisations key tasks is to “examine the cost drivers for courses, the different public and private returns and develop a list of efficient prices for courses”.

“Core to this is a consideration of quality,” he said.

“Efficient price does not mean the lowest price. Rather, it means the price that needs to be paid to secure training that delivers students with the skills employers needs and set students up for a valuable career.”

“I really want to focus on that last point – an efficient price is not the lowest price.

“It’s the price that provides the quality outcome we’re after.

“Ultimately, all of this work is about improving confidence in the system, particularly from the perspective of students,” Mr Boyton said.

NCI's first grant round gets a big response

There has been a strong response from across the VET sector to the first round of grants offered by the National Careers Institute (NCI).

The NCI’s Partnership Grants Program, which closed on June 30, attracted more than 500 applications, according to the Department of Education, Skills and Employment. The department is now collating and reviewing the total number of eligible applications.

The program will provide grants ranging from $20,000 to $700,000 for up to two years to industry, employers, schools and tertiary institutions to deliver innovative approaches to careers advice.

The Minister for Training and Skills and Higher Education Gayle Tierney announced a $163 million package that includes funding to help train those most impacted by coronavirus, particularly women and young people.

The package will create 10,000 more Free TAFE places, and expand Free TAFE to include new full qualifications linked to jobs and government priorities.

There will also be more short courses to support upskilling for existing employees, and help retrenched workers find jobs.

It includes the Course in Introduction to the NDIS (skill set), as well as $3.9 million for an additional 11,000 places in accredited short courses and skill sets in construction across TAFE and industry-owned Registered Training Organisations until June 2021.There is also $1.25 million to improve literacy, numeracy and digital skills.

The 17-member stakeholder group will provide an avenue for engagement with ASQA on key issues affecting training providers.

As was outlined in the SLG terms of reference in April, TAFE was allocated two representatives on the stakeholder group. They are Ms Margie Fixter, Executive Director, Quality, Teaching and Learning at TAFE SA; and Ms Julie Healy, Director Vocational Education and RTO Manager at TAFE Queensland.

TDA CEO Craig Robertson said the TAFE representation will provide an important additional avenue to ensure that TAFE quality and effectiveness are reflected in stakeholder liaison.

“Margie and Julie are key leaders in the quality, regulation and compliance network for TAFEs and will be in a position to provide practical yet strategic advice to ASQA,” Mr Robertson said.

“Importantly, the liaison group will be able to give grounded advice about the pathway to excellence which has been identified as a key objective by skills ministers.”

ASQA issued an Expression of Interest for membership of the SLG in April, with applications closing on May 15, and more than 350 applications received.

The role is aimed at building business, trade, investment and cultural relations with the region.

Rebecca was previously Head of the International Education Centre of Excellence at Austrade.

She previously worked with the Queensland and Victorian state governments and was a former Director of International Engagement at TDA.

Victoria has 22 trade and investment offices around the world, including three in Southeast Asia in Jakarta, Singapore and Kuala Lumpur, with another soon to open in Ho Chi Minh city.