Reflecting on three years as TasTAFE’s Chief Executive, Jenny Dodd is enthusiastic about the extraordinary leadership shown across the TAFE network in a year which has been like no other.

Jenny will finish with TasTAFE in December after a 28-year career in TAFE. She began in 1993 as a casual teacher at the Canberra Institute of Technology on two hours a week, and 20 years later, in 2013, she was CIT’s Acting CEO. During those two decades Jenny had many roles including Education Manager, Director of Marketing and National Projects, and Deputy CEO Education. Jenny left CIT to become General Manager of TAFE Queensland Gold Coast.

“What an incredible ride it has been – full of stimulating roles, amazing people and many, many challenges,” Jenny said.

“But most importantly, there was never a day when I was in doubt as to the value of what we did at TAFE. As custodians of the public provision of vocational education and training we know that we make a huge contribution to individuals, to our communities, and indeed to Australia – what an honour to have had the opportunity to have worked in three jurisdictions for TAFE.”

Jenny’s first career was as a marketer for the Australian Gas Light Company and later for Medibank, both in Sydney.

“My qualifications and then working in marketing have all been important parts of the fabric of my career. These early years in industry cemented skills in client service and developed strong business acumen. Both of which are fundamentally important,

whether you are leading private businesses or accountable for taxpayers’ funds such as we are in TAFE.”

A desire to balance a career with three small children prompted a career shift. After attaining qualifications in education, Jenny taught in a Canberra high school. Realising that was not for her, she gained adult learning expertise and began working for a private training provider.

Not long after, Jenny joined CIT and went on to many rich roles including in national e-learning project management which included one of her most rewarding roles overseeing flexible learning.

“As General Manager of TAFE Gold Coast for three years I was involved in a lot of very exciting initiatives.

“However, I’ve always been prepared to move if the timing was right, and this occurred again when I accepted the role as Chief Academic Officer in Brisbane.

“That period saw us merge multiple RTOs under the one TAFE Queensland banner. In that same period, I also negotiated TAFE Queensland’s role to train the 2018 Commonwealth Games volunteers.

“We moved the bulk of the training online and implemented some innovative technology to morph the systems of the Games organisers with our own TAFE Queensland Learning Management System. None of that would have been possible without some exceptional people – something that the TAFE workforce has in spades.

“Once again, when I started with TasTAFE in 2018 I had no trouble finding highly capable people to lead our direction.

“These last three years have been a fairly tumultuous time and I am grateful to my leadership team and to the wonderful network of professionals I have worked with in other jurisdictions who never failed me when I called for assistance.

“The next few years in VET will be interesting and I hope to still be a part of that. I believe it is time to break the dominance of the Training Package environment which has become more and more prescriptive and less about good educator judgement.

“The move to national pricing I also don’t believe will be good for small jurisdictions like Tasmania with low volume, high regional needs.

“There is much to be done, TAFE colleagues. I wish you well and thank you all. My career highlights are too many to list – undoubtedly the best part has been working with fabulous, capable people.”

Jenny, it has been a tremendous career record. I know that I speak on behalf of the entire TAFE sector in congratulating you and wishing you well in the next chapter.

TAFE in the winners circle at global college awards

Australian TAFE Institutes were named among the best global education and training institutions at the World Federation of Colleges and Polytechnics 2020 Awards of Excellence on Friday.

Chisholm Institute, Gold in the ‘Access to Learning and Employment’ category

Chisholm Institute was engaged in the Vietnam TVET Reform Program, funded by the Government of Vietnam and implemented through a partnership comprising the Directorate of Vocational Education and Training, Chisholm Institute and Advanced International Joint Stock Company, Vietnam (AIC).

South Metropolitan TAFE, Gold in the ‘Partnership with Industry’ category

South Metropolitan TAFE partnered with Rio Tinto Iron Ore (RTIO) to develop and deploy the first vocational qualifications for automation in mining and production services. Through the development of an industry led, government and education vocational solution, Western Australia’s resource sector now has the benefit of the first nationally recognised qualifications in automation.

Kangan Institute partners with Australian Red Cross on an annual sustainable and circular fashion design program that provides fashion students with experience in creating sustainable fashion designs. The program is based on the philosophy of reduce, reuse and recycle – students select donated garments and textiles from Red Cross Shops. Students are taught and encouraged to embrace sustainable techniques throughout the process of design and transformation.

The World Federation of Colleges and Polytechnics (WFCP) is an international network of colleges and national and regional associations of colleges. The 2020 awards received 113 nominations from across the world, including Australia, Brazil, Canada, China, Fiji, Kenya, Spain, the United Arabic Emirates, the United Kingdom and the United States.

Craig Robertson, Chief Executive Officer of TAFE Directors Australia and Chair of the World Federation of Colleges and Polytechnics congratulated the Australian TAFEs that reached the finals of the awards.

“It’s not only in Australia but around the world that the TAFE brand equates with the very best in student outcomes, industry partnership and innovation.”

The Awards were ‘zoomed’ worldwide on Friday night including into the TVET conference of the China Education Association for International Exchange and webcast to over 600 participants throughout China.

Box Hill Institute has come up with an innovative, COVID-safe approach to showcase the collection of its 2020 fashion students.

Its Bachelor of Fashion students captured the power of design and creativity with their first live stream runway show.

“Euphoric” celebrates an eclectic mix of fashions, which were creatively designed and produced during COVID-19 lockdown. 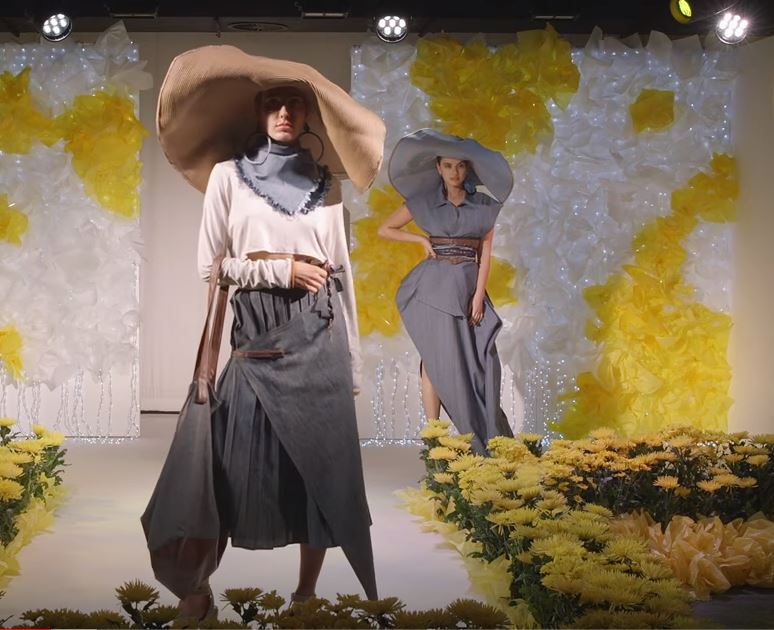 Government urged to help open up applied research to SMEs

Australia’s small and medium-sized business sector has the ability to become an innovation leader and help propel the post-COVID economic recovery, if it can tap into the benefits of applied research.

The joint report, SMEs and TAFEs Collaborating through Applied Research for Growth, prepared by Cisco, Optus and TDA aims to refocus the benefits of applied research that are typically associated with larger enterprises, particularly as the country emerges from COVID-19.

“The hasty adaptation of business processes, such as working from home, and the application of technology to deliver goods and services in new ways is likely to have awoken business owners and managers to the power of innovation,” the report says.

It calls on the federal government to commit $5 million to support a 12-month transformation pilot program where TAFEs collaborate with SMEs and family businesses to develop or enhance products and improve services and processes. The CSIRO has indicated its intention to be involved in implementing the program in an advisory capacity.

TDA CEO Craig Robertson said that TAFE engagement with businesses based on an applied research model was one tangible and practical solution to rebuilding resilience and encouraging innovation in SMEs.

“Results can then be disseminated through the national TAFE network and beyond as a new model of support to businesses, reflecting the industry-ready relevance of the vocational education approach,” he said.

A new paper from Ai Group proposes an alternative model for apprenticeships that goes beyond the trade-based approach, to include higher level qualifications in technical and professional occupations.

The background paper, ‘An Apprenticeship Model for the modern economy’ says the current apprenticeship model plays a valuable role in skilling and employment for young people, but suffers a number of weaknesses. These include reliance on the offer of a training contract from an employer, difficulties in attracting recruits, variable quality from employers and training providers, a preponderance of qualifications at the Certificate III level, and poor completion rates.

It suggests apprenticeships could be adapted as a major work-based learning pathway at technician and para-professional levels and beyond.

“Graduates from such a model would develop highly valued contemporary skills and employability, blending the best from vocational and higher education,” the paper says.

Ai Group backs the recent Mitchell Institute proposal for a National Job Cadet Program – effectively a series of higher level apprenticeships, or “cadetships”, at the Diploma and Bachelor’s degree levels.

“The apprenticeship system sits neatly in this space,” AiGroup says.

“It is capable of providing a high-quality, fully integrated learning and employment experience at the leading edge of transformation. The education and training system should not always have to chase the future; it should be part of it.”

The Mining Skills Organisation Pilot has announced three project hubs which will form a key part of its aim to speed up delivery of skills in the mining sector.

The three project hubs are:

Interim chair of the pilot and CEO of the Minerals Council of Australia, Tania Constable, said they are working closely with the VET system, so it is better aligned with industry needs.

“This will ensure the industry has access to the skilled talent it needs to continue creating highly skilled, highly paid jobs and making a significant contribution to the national economy,” Ms Constable said.

The Australian Skills Quality Authority (ASQA) is seeking feedback on a new draft compliance policy which is due to come into effect next April, and includes an element, known as an “undertaking to remedy” for training providers that don’t meet quality standards.

Currently, providers have 20 working days in which to address any non-compliance issues, but ASQA has opened the way for a longer period, as part of the undertaking

ASQA raises the question of whether six months is a reasonable time for a provider to be able to remedy any issues.

It says that an undertaking would not be appropriate where a provider has a long history of poor compliance or no genuine commitment to deliver quality VET.

Feedback is open until January 10.