Lots happened this week. The budget was central to this, outlining direction for vocational education and training in 2023, establishing Jobs and Skills Australia, and providing the budget for the higher education review.

Firstly, the main ticket item for TAFE was the one-year 2023 national skills partnership agreement, which has TAFE at the heart, with funding for the free-fee places. Each state and territory will develop, in negotiation with the Commonwealth Government, their priority list of courses and eligibility criteria. As reported by the National Skills Commission there has been an increase in occupations on the skills priority list recently so there is much to choose from. Although there will be commonality, such as in the critical area of attracting people to develop skills for working in the care industries, there will also be differences. The differences will reflect jurisdiction priorities.

Most pleasing was the inclusion of $24million for wrap around support services for students receiving a free-fee TAFE place. As I was quoted in the Australian Financial Review this week, “the additional places (free-fee TAFE) will be absorbed by people who traditionally did not access the training market. The Jobs and Skills Summit had a very strong focus on equity and attracting people into the labour market who were not active participants. Fee-free TAFE has proven in Victoria to be a policy that enables those people to get the skills they need.” However, that requires additional support services in learning areas such as literacy and numeracy, and for example in counselling and mental health services. As education entities with extensive student support services, TAFEs have always focused on providing support for learners to achieve their outcomes.

The budget also had a strong focus on skills for the clean energy economy. TDA with its members looks forward to being part of the workforce planning process that Jobs and Skills Australia will undertake.

That leads to the second significant development this week and that was the establishment of Jobs and Skills Australia. Identified in the budget, and with the legislation passing through the Senate this week, this independent body can now get going on providing advice about current and future skill needs. This is an important coordination role for planning the skills needed for Australia’s future labour force.

An important adjustment to the final Jobs and Skills Australia legislation was the inclusion of universities in the list of bodies that will be consulted. Originally the focus was on employers, unions, industry stakeholders and training providers. TAFEs look forward to working with their university partners through these discussions.

The final significant development is also linked to both higher education and the budget. There was budget allocation of $2.7million for a comprehensive review of higher education. This work will be led by a panel of ‘eminent Australians’. Although not released until next month, the terms of reference are likely to include the full suite of tertiary education activity.

So, there is much going on for TAFE next year – read more about it as 2023 unfolds.

Federal Budget places TAFE at the heart of skills revitalisation

Last week’s Budget set out key details of the federal government’s plan to reinvigorate the VET system with “TAFE at its heart”.

The key element is a new $1 billion, 12-month skills agreement between the Commonwealth, states and territories, starting in January 2023.

Other Budget measures include:

The Budget identified a number of savings measures:

The new agency Jobs and Skills Australia is set to commence after the JSA legislation passed the parliament last week.

Last week’s federal budget provided $12.9 million to establish the agency and start on the work of identifying demand for jobs and skills.

The Minister for Skills and Training Brendan O’Connor said the interim JSA will build on the important work of the National Skills Commission, replacing it a week after royal assent.

One of JSA’s first tasks will be the preparation of a capacity study into Australia’s clean energy workforce. The budget allocated $1.9 million for this work.

The agency will also lead the development and delivery of a $12 million new National Study on Adult Literacy, Numeracy, and Digital Literacy Skills.

“This will be the most comprehensive study ever undertaken in Australia,” Mr O’Connor said. 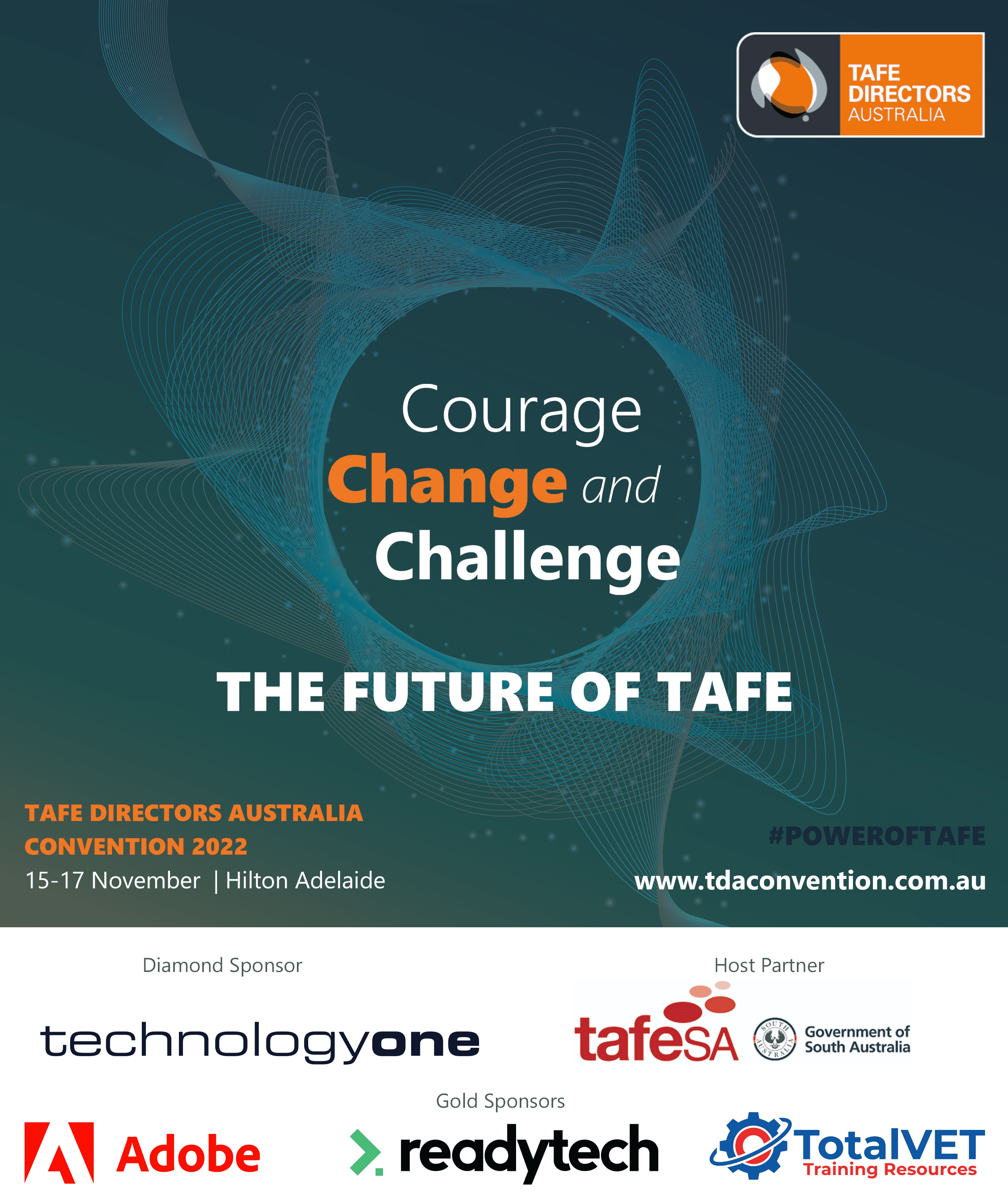 TDA is pleased to advise that the TDA Convention 2022 program can now be viewed online here.

The action-packed program spanning three days features a diverse range of speakers and topics to inspire and inform delegates. TDA would like to warmly thank all of the sponsors and exhibitors supporting the TDA Convention 2022 as well as the host partner, TAFE SA.

As part of the TDA Convention program, delegates will be joined virtually by a panel of three international experts from the UK, Canada and the European Commission to share insights on trends, challenges and successes in vocational education and skills training overseas. The presentations will be followed by a live Q&A session with the panel and audience participants.

TDA is very much looking forward to welcoming its members, partners and supporters to Adelaide from 15-17 November to be part of the conversation on Courage, Change and Challenge: The Future of TAFE. 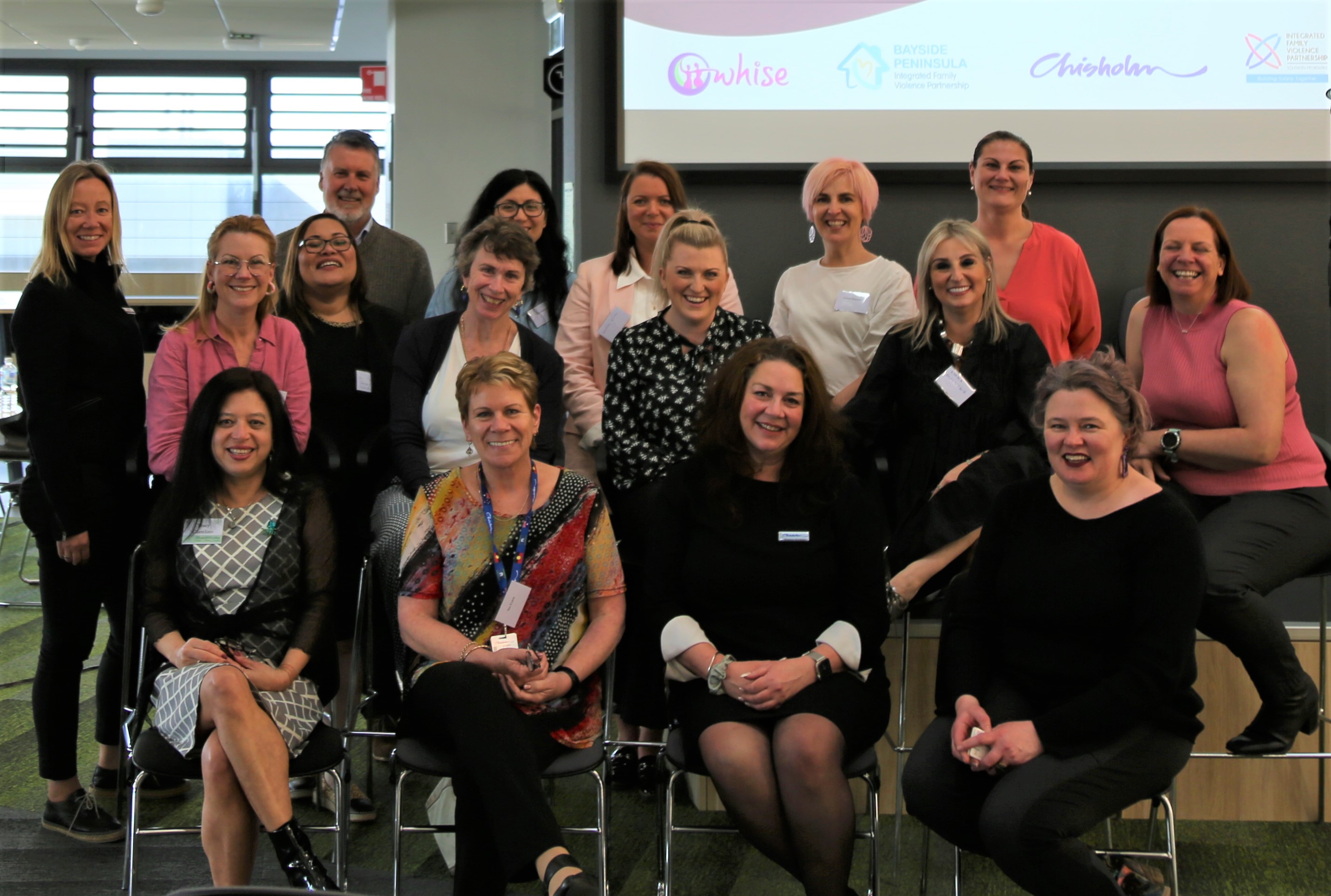 Chisholm Institute’s Frankston campus recently hosted ‘Aligning the Personal with the Professional’, a conference focused on the lived experience within the family violence sector in the Southern Metropolitan Melbourne region.

The conference sought to put into practice recent reforms and work in the family violence sector.

Victoria’s Minister for Prevention of Family Violence Ros Spence attended and shared her own remarks with conference delegates.

The conference was hosted and organised by a committee (pictured above) comprising Chisholm TAFE, Women’s Health in the South East (WHISE), and the Integrated Family Violence Committees of Bayside Peninsula and Southern Melbourne.

Watch a graphic recording of the conference.

Apprentices and university students in regional NSW will be eligible for a new $250 travel card to help with the cost of the commute to work, training or university.

Deputy Premier and Minister for Regional NSW Paul Toole said apprentices and university students in the bush often need to travel long distances for work or between training, classes and practical learning.

OctoberVET 2022 Ballarat: Inclusivity and the future of VET

Ballarat’s fifteenth annual OctoberVET event is back face-to-face in November with the theme, ‘Inclusivity and the future of VET’.

The free research-based event will take place on Wednesday 23 November.

The keynote speaker is Adjunct Professor Robin Shreeve, an ‘elder statesman’ of VET, who has held many senior appointments in government agencies and in TAFE systems in Australia and the UK.

The next Destination Australia Program (DAP) funding round for providers for the 2023 academic year recently opened.

The closing date for the round has been extended to Tuesday 22 November 2022.

Applications for the round are via the Community Grants Hub.

For any queries, contact the Destination Australia team on destinationaustralia@education.gov.au

The Australian Skills Quality Authority (ASQA) has extended the transition end date for current apprentices completing their third or fourth year of study in the qualification, UEE30811 Certificate III in Electrotechnology Electrician, to 31 January 2024.

ASQA has also approved an extended transition period for qualifications in the MEM05 Metal and Engineering Training Package for CRICOS registered RTOs to 31 January 2024. The qualifications are:

The Australian National University’s Social Research Centre is conducting a research project on behalf of the federal Department of Employment and Workplace Relations on how well people in regional, rural, and remote areas are supported to undertake vocational education and training.

The research will look at the support services that make a difference to the completion of VET qualifications.

The survey can be undertaken here. It is open until this Friday, 4 November.