Heated agreement makes a change for the VET sector and TAFEs.

The Prime Minister and first ministers should be congratulated for their joint agreement on Friday to position TAFEs on the same footing as universities.

This was re-iterated by Premier Berejiklian in the post meeting press conference:

… my colleagues also go to the fact with what we all had violent agreement on …is that vocational education and training is equal to other forms of tertiary education.

And if we want to be a nation that has the right skills for our existing industries, but also emerging industries, we need to have that in a good strong position. And in New South Wales, as I know in other states, there’s a natural conversation now occurring between universities and TAFEs and that is something we’ll encourage at a state level.

And … when we talk about education post-secondary school, we should be talking about universities and TAFE in the same breath because the options available should be of equal quality, of equal opportunity and equal accessibility to the community.

So the bar has been set. A new council of ministers with responsibilities for skills has been established, tasked with fleshing out the vision for reporting to COAG early in the new year.

These words will no doubt be parsed, homogenised, pasteurised … you name it, as ministers take to the task. For me they are pretty clear.  Here’s my version.

On a final note. This year’s TDA convention is more important than ever as we contemplate the future of TAFEs. Register now. The final program is out.

I’ll be teaching limericks, so come along.

Commonwealth, state and territory leaders have committed to a new COAG Skills Council, which, in consultation with education ministers, will devise a fresh VET reform plan by the end of the year.

It will form the basis of a reform “roadmap” early next year which will see VET and higher education as “equal and integral parts of a joined up and accessible post-secondary education system”.

The COAG Communique was accompanied by a Vision for Vocational Education and Training that sets out the goal of a “responsive, dynamic and trusted sector that delivers an excellent standard of education and training.”

“All jurisdictions acknowledge the importance of a viable and robust system of both public and private providers, and the particular role of states and territories in facilitating the public provision of VET,” it says.

“A focus on national consistency in key areas, such as quality assurance and qualification levels, whilst maintaining flexibility in the system for jurisdictions to meet local needs will ensure VET continues to work for all Australians into the future.”

Following the COAG meeting, Prime Minister Scott Morrison said the skills agenda was one that “we all feel very passionately about and one that I know we’re going to continue to work very closely together on.”

“We spend over $7 billion a year on that agenda and we want to make sure that that money works harder for all Australians,” he said.

Ahead of COAG, TDA Chief Executive Craig Robertson told ABC RN Breakfast that figures show many young people were not attracted to VET and there was an urgent need to modernise qualifications, perhaps taking some of the power out of the hands of industry in designing courses.

“We need to overhaul the qualifications that we deliver so we make sure that it is an attractive training option that can lead to a good job and a career.”

He said TAFEs could be given greater say in designing courses that meet industry needs, citing the example of Box Hill Institute’s cybersecurity qualification, developed by TAFE, and being delivered nationally amid soaring demand for cybersecurity expertise.

Alan Jones tells the PM how to fix the training system: fund TAFE

The radio 2GB star told the PM that his switchboard was “on fire over TAFE”.

“The national apprenticeships and traineeship numbers have fallen from 446,000 in 2012 to 295,000 last year. And TAFE is the only institution you can trust to deliver genuine vocational training,” Mr Jones told the prime minister.

“Now it’s easy isn’t it? If you want to fix vocational education, give these people some money,” Mr Jones implored the PM.

However, Mr Morrison pushed back, claiming that TAFE is responsible for 16% of all training, with more than 80% outside TAFE.

Mr Morrison said a major problem was the way Commonwealth funds were handled by the states.

“There’s no ties on it, it just goes to the states and they make a whole bunch of decisions.

“What we’re not doing at the moment is the qualifications and the accreditations are not keeping pace with the modern economy and employers aren’t getting the people out of the training system they need that can actually make their business work better.”

The full convention program has been released. It showcases ‘The Power of TAFE’ and brings together presentations on best practice from TAFE institutes, industry and collaborations across the VET sector. 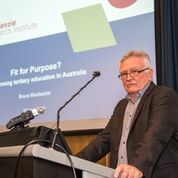 The Mackenzie Research Institute is an initiative of Holmesglen, and aims to develop policy papers and advance public debate with government, business and social institutions to influence tertiary education reform.

The former Holmesglen CEO chaired the 2015 Victorian government funding review and had a 30-year career in the VET sector which saw him formally recognised with the 2017 Lifetime Achievement Award at the Australian Training Awards.

Mr Mackenzie told The Australian that one of the institute’s first papers will address the issue of structural difficulties in the tertiary education system.

“We had a look at the reforms in Switzerland, the Nordic states and in the UK, and they’ve done some really interesting things to try to reverse some of the negative aspects in focusing too much on higher education.”

From next year in the UK system, senior secondary students will be able to opt for an academic stream or a technical stream that will be accompanied by benchmarks in literacy, numeracy and digital skills, as well as their subjects.

“We’re saying that you really can’t reform tertiary education unless you reform upper secondary education first of all,” he said.

The Victorian government has responded to the surge in demand for places under its free TAFE initiative with an $11.7 million package to support students and staff.

Students facing disadvantage will benefit from a $6 million injection for new course materials to assist with time management, study skills and literacy.

An additional $5 million will help ensure TAFEs keep up with demand so eligible students can enrol in their preferred free TAFE course.

A total of $500,000 will be available for teaching scholarships to professionals with industry experience to address staffing vacancies in priority areas.

Premier Daniel Andrews said more than 25,000 students have commenced training in free TAFE in the six months to the end of June, a 92 per cent increase compared with the previous year.

Students over the age of 30 account for almost half of the enrolments and more than a quarter are in regional areas.

Apprenticeships to be made free in Queensland

The Queensland government will make apprenticeships and traineeships free to employers, in a $32 million initiative, expected to support 60,000 young people.

Premier Annastacia Palaszczuk announced the commitment which will apply in areas of high demand including electrical, plumbing, engineering, healthcare, hospitality and early childhood, for people aged under 21.

There will also be a $5.5 million micro-credentialing pilot, a higher-level apprenticeship pilot, and  an expanded Gateway to Industry Schools program so students can train in emerging industries.

The Australian Skills Quality Authority (ASQA) has warned that some registered training organisations are not ready for new third-party arrangements for delivery of training and assessment that will take effect in a few weeks.

ASQA said RTOs have indicated that they are unclear of the extent to which they can use third parties for the delivery of training and assessment, and says some have arrangements that will not be compliant.

“ASQA holds concerns with third parties undertaking marketing and recruitment on behalf of RTOs that is not in line with the requirements of the NVR (National Vocational Education and Training Regulator Act 2011) Act.

The role of micro-credentials in tertiary education is up for debate.  There’s a chance to learn more on August 26 in Melbourne.

Australian Apprenticeship Support Network (AASN) providers have been given a short-term extension of their contracts until February 1 next year.

Existing contracts for the 11 AASN providers lapsed in June, with the future unclear in light of the Joyce Review recommendation for new Skills Organisations to take on many of the functions of AASNs.

The AASNs deliver support services from around 400 locations nationally.