Earle Page, 11th Prime Minister of Australia (albeit for 19 days) was the first to venture fiscally into state affairs. He was concerned about the repair of the roads in his electorate. “They are dangerous and hamper farmers getting produce to markets,” you could imagine him saying as Treasurer to his cabinet colleagues. Thus was born in the 1923 Budget, the economic and social imperative and political spillovers which have characterised Commonwealth

For vocational education and training the venture into state affairs started with Kim Beazley Senior in the heady days of ‘It’s Time’ Whitlam largesse and social reforms, in the form of capital assistance.

The notion of ‘National’ entered VET when John Dawkins as the Education and Training Minister in the late 1980s established the National Training Board and, along with it, a pivot to face the needs of industry and the birth of competency-based training (more on that in future weeks). Industry leadership reached its apex when ANTA was established as a Commonwealth authority replete with an industry board. Even though it was Commonwealth in nature, it was charged with national planning and design, including national industry qualifications, but the plan to pool and distribute public training funds based on national priorities grounded on the rocks of states’ rights.

When John Howard won a record fourth term in 2004, emboldened by a rare majority in the Senate he set about bringing functions closer to government, and ANTA was closed. It was aided and abetted by episodes of dysfunction within ANTA on display to Peter Shergold when he was Education Department Secretary just prior to becoming Secretary of PM&C and advising on the functions to fold back into the bureaucracy.

Things were strong initially as the Commonwealth department seized the reigns and was supercharged by $2.5bn injected into the system from Kevin Rudd’s 2007 platform. Running off the back of a voucher scheme operated by Howard, Rudd’s Productivity Places Program (PPP) was directed to the unemployed through the job network to help them into work. Short lived, the bulk of the funds transferred to states and territories in a new era of collaborative federalism. Some entrails were offered to Industry Skills Councils which had adroitly demonstrated the benefits of co-funding with employers to generate new skilling activity. (The barney outside the Cabinet room between bureaucrats about this element of the measure is stuff of legend in VET circles!)

Dissatisfied with the rate of market reform and with little to see for its investment, Prime Minister Gillard instituted the skills reform national partnership, mopping up the last of the PPP funds into buying reform at the state level. Whether this was designed to bring parity in funding operations between VET and the newly instituted demand driven funding to universities is not known. Now go back to last week’s newsletter to see the breakdown of the VET side of the deal. What a journey!

What has happened to funding over that journey? The chart tells the story. The blip from 2007 to 2013 is PPP funding. What is most telling is the sheer inadequacy ever since. The Final Budget Outcome shows the actual expenditure year-on-year. The $1,168m of 1999-2000 is worth $1,889m in CPI adjusted terms in 2017-18 yet for that financial year is 8.6 per cent, or $156m short. And this doesn’t account for population growth of 32 per cent in that period or a new base that should have been created with the PPP investment. 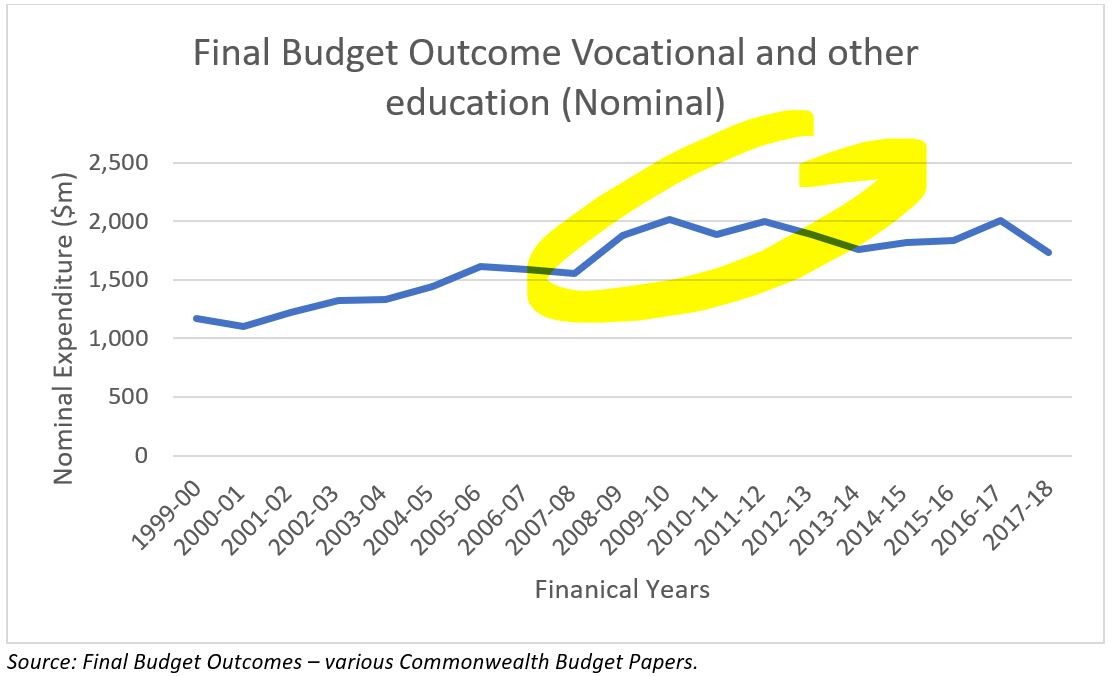 The best thing Stephen Joyce can recommend to the Prime Minister from his review of VET is a major direct investment into the base to states and territories, not a flim-flam program intervention – better still, a population-driven investment as a first step to establishing a decent base for rebuilding VET.

At risk is lack of skilled Australians to get product and services to markets. I wonder what Earle Page would be contemplating if he were Treasurer.

The federal opposition has released a detailed framework and outlined the objectives of its planned “once-in-a-generation” national inquiry into post-secondary education.

The Deputy Leader of the Opposition and Shadow Minister for Education and Training Tanya Plibersek issued the términos de referencia that will guide a Labor government inquiry in a habla to the Universities Australia conference in Canberra last week.

Ms Plibersek said that Labor would ensure “a strong vocational education sector as well – with public TAFE back at the centre.”

“I reject the assertion that rebuilding TAFE should come at the expense of universities. Labor wants TAFE and university to be seen as two equal but complementary systems,” she said.

Craig Robertson, CEO of TAFE Directors Australia said the terms of the inquiry are comprehensive and wide ranging, committing to explore all aspects of VET and higher education with the express purpose of lifting participation in post-school education accompanied with increased education standards.

Ms Plibersek also told the Revisión financiera that, under Labor, there would be an increase in funding for VET on top of the $100m already promised for TAFE infrastructure, if it won the election.

“I hear from universities that they’re in trouble but when I go to TAFE campuses I see 40-year-old infrastructure. It’s clear there’s a problem,” she said.

“We are grateful that Labor has taken such a strong stand to see TAFEs as key institutions in the post-school landscape serving students, industry and innovation, especially for regional Australia,” he said.

Ms Plibersek also signalled an overhaul of international education (see story below) and said Labor would appoint a regional and remote commissioner to advise the inquiry on support for country students and regional TAFEs and universities.

TAFE  has become the centre of an election campaign bidding war in NSW ahead of the state election in just over a fortnight.

Both the Liberal-National Coalition government and the Labor Opposition have put TAFE in the front line of electioneering in an all-out effort to gain the ascendancy in the knife-edge contest on March 23.

Last week, the government announced an additional 100,000 free TAFE places across the state if re-elected.

The Coalition has already committed to building new TAFE campuses in Batemans Bay and Byron Bay, areas where the local electoral contest is seen as extremely tight.

Labor is promising 600,000 fee-free TAFE places over the next decade in areas of skills shortages, such as childcare, aged care, disability care, construction, plumbing and the electrical trades.

It is also guaranteeing that 70% of contestable funding will go to TAFE.

The federal government has re-credited VET FEE-HELP balances for more than 100 students and wiped debts worth almost $3m under its measures to address the VET student loan scandal.

The new laws which came into effect in January  provide debt relief for students who can demonstrate they were the victims of unscrupulous training providers.

The Minister for Skills and Vocational Education Senator Michaelia Cash said it was difficult to predict how many students were ripped off by unscrupulous providers, but “potentially thousands of former students incurred a VET FEE-HELP debt when they simply shouldn’t have”.

Students affected by the VET FEE-HELP disaster can apply to the VET Student Loans Ombudsman  (VSLO) to have their debts removed.

Senator Cash said the latest debt waiver represents about 2% of the ‘backlog’ of VSLO complaints about VFH providers.

“Over the coming months, we expect to re-credit the debts for thousands more students building on over $90 million which has been already paid out to approximately 8,000 students,” Senator Cash said.

International education set for a revamp under Labor

The federal opposition has foreshadowed an overhaul of Australia’s strategy for international education, if it is elected to government.

Deputy Opposition Leader and Shadow Minister for Education and Training Tanya Plibersek told the Universities Australia conference in Canberra last week that a Labor government would revamp the Council for International Education and review its strategy.

“For example the Council doesn’t currently include a representative of TAFE or Universities Australia,” Ms Plibersek said.

“The five year strategy the Council has been asked to implement is vague and fails to grapple with the breadth of issues the sector faces, including market diversification,” she said.

“International enrolments in VET are surging, but our TAFEs only receive an eight per cent share of the market, and commencements are flat or declining in many states.”

TDA Chief Executive Craig Robertson said “Australian TAFEs have incredible capabilities to grow international education,especially to deliver world-relevant and first-class skills when given the trust and flexibility to do so.”

Ms Plibersek said there were “challenges and strains” emerging in the international education market, and “a risk that Australia becomes too reliant on just a handful of countries for our international students.”

The Minister for Senior Australians and Aged Care, Ken Wyatt has visited William Angliss Institute to announce funding for a new training program for kitchen workers in the aged care sector.

The minister announced the $500,000 funding to support the not-for-profit Maggie Beer Foundation and partners – William Angliss Institute and Altura Learning.

The project will develop a series of online training modules dedicated to cooks and chefs engaged with aged care.

“Everybody has the right to good food every day but none more than those who have lost the chance to cook for themselves,” Ms Beer told 9News.

“Sometimes a cook or chef will be doing 18 different diets in the one kitchen.

“There just hasn’t been training for this very complex issue.” 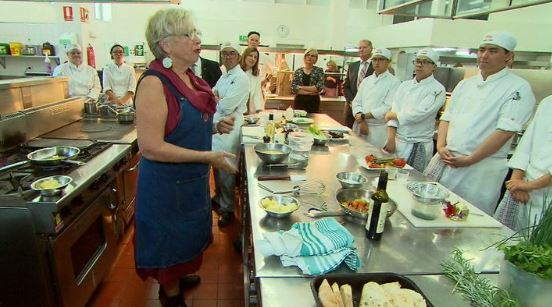 A veteran of the NSW training sector remembered

The 94-year old was the former chair of Hunter-based HVTC and a director until 2015. He was a life member of Group Training Australia (now the National Apprentice Employment Network).

Mr Morris became the Liberal Member for Maitland in 1956 and represented the constituency for 25 years. He served as a minister in three portfolios from 1965 to 1976, and holds the NSW record as the longest serving minister for transport.

The National Executive Officer of NAEN Dianne Dayhew said Milton Morris was an inspiring, influential and energetic figure in the vocational training sector who worked tirelessly for apprentices and trainees.

National Skills Week (NSWK) will be celebrated in the week 26th August to 1 September, with the theme “Succeed your Way”, aimed at exploring the many ways a person can navigate and individualise their pathway to success.

NSWK has been, and continues to be, a strong supporter of TAFE. The content and involvement of TAFE students will be a feature of state launches and activities. Now in its ninth year, the event will feature extensive media coverage and events nationwide.

TAFEs are encouraged to take advantage of the week by holding  events and activities that showcase the talents, diversity, benefits, pathways and job outcomes associated with TAFE.

This year’s event coincides with the international WorldSkills competition in Russia, providing further opportunities to highlight the value of skills training.

If you would like further information or wish to develop ideas, SkillsOne is happy to discuss. Please contact Anne Cazar on 0438 808 848

The government’s ‘Skilling South Australia’ initiative saw the creation of eight new industry skills councils with the objective of strengthening industry’s voice in workforce development, and directing funding to industry priorities. It also saw a revamp of the Training and Skills Commission under chair Michael Boyce.

Ver details and members of the Industry Skills Councils

The 2019 VDC Thought Leadership Series presents an opportunity for VET professionals – including executives, managers, coordinators and practitioners – to engage with industry consultants, education experts and academic researchers about VET sector’s cutting-edge topics and beyond.

The series showcases the latest in academic research paired with industry and practical advice from the VET Sector and beyond.

All VDC Thought Leadership Seminars are free and are followed by an opportunity to network at morning tea.

Seminar 1 Design Factory Melbourne – Creating the conditions for innovation, 15 March 2019 at 9am – 10am followed by morning tea at VDC Level 8, 379 Collins Street, Melbourne.