Build Like a Girl: encourage, recruit and retain women in trade roles

Established in 2020 Build Like a Girl is a model and a movement for women in trade roles, run by specifically by women supported by key industry leaders, industry associations and organisations advocating and implementing real change. Build Like A Girl has become more than a program – it’s a movement driving change.

Founder Jo Farrell developed the foundation of Build Like A Girl from her own experience working as a female tradie in the building and construction industry. Jo wanted to develop something more than a program, she wanted to create a model and a movement that is for women, run by women. Read Jo’s story here.

It is a not-for-profit organisation that develops collaborative pre-apprenticeship and entry level programs, that aim to develop into actual employment and continued mentoring, coaching, case management, networking and support. It’s a model that seeks to enact real change in the industry by reinvesting money into training, education, mentoring and securing long-term employment for a diverse range of women. They include: 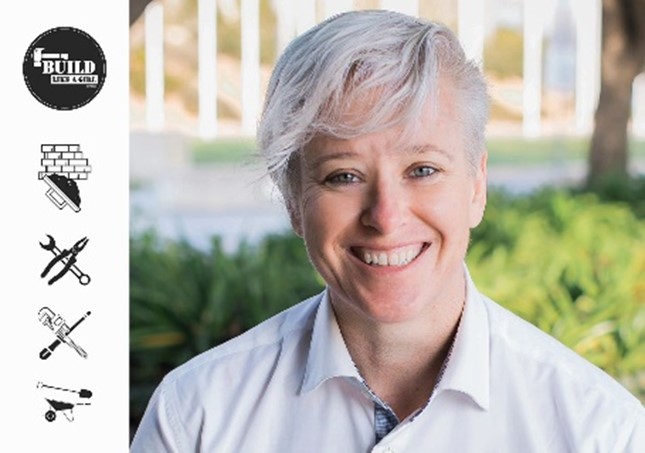 The program identifies women in need of employment, supports them through pre-apprenticeship training, resilience training and accredited Certificate III trade skills to grow confidence and understanding of trade opportunities. It then assists women to access jobs with employer partners and enter employment with ongoing mentoring and a wide range of support.

Female participation as apprentices and trainees in the construction, automotive and electrical trades is less than 2%, if not less. Changing little over the last 25 years. Build Like A Girl aims to have at least 60 women in trade roles at the end of its first three years.

In secondary school, there is a lack of information about careers in trades for girls

Previous campaigns to rectify the low levels of female participation have failed. Why?

Because they have not included or accepted the contribution of men within the industry as part of the solution.

The burden of higher recruitment and retention has been placed on women rather than the industry at large. Build Like A Girl is changing that.

Women make up approximately less than 2% of Australian tradies. To counteract this low level of participation and employment, different organisations have attempted various programs and initiatives. All are well intentioned, but do not achieve long-term, measurable improvements to the overall numbers of women entering trade roles.

Build Like A Girl is an over-arching driving force. It incorporates programs from around Australia that don’t have the longevity and support that is critical to retaining women in trade roles. Our program is for apprentices, students, girls who have left school, women returning to work and any woman in a trade role, no matter where she is at in her career.